If you've ever looked at the Cape Girardeau street map on Google, you may have noticed a large green blob near Bloomfield Road and Interstate 55 labeled as Mount Tabor Park. 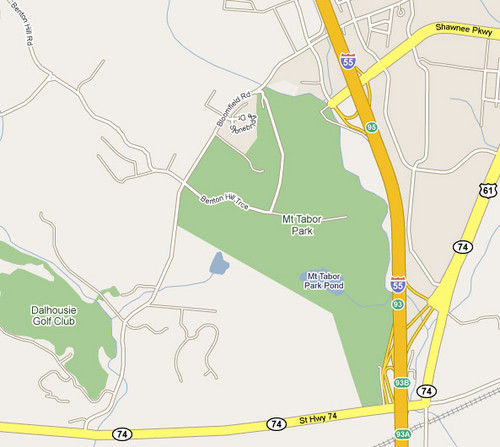 Google Maps is an amazing system, but it shows some features that haven't existed for over a quarter-century. Mount Tabor Park hasn't been a public park since 1983.

Mount Tabor was mentioned recently in the online Speak Out discussions about long-lost places and memories of Cape and Jackson.

Hookie98 posted, "Here is one that I almost forgot about........ Mount Tabor Park. When I was a teenager a group of us went out there one night, and waited for the headless horseman. Then someone snuck up outside of the car, and banged on the side nearly scaring us to death."

Travellin man wrote, "There was Mount Tabor park which was between Cape and jackson. I know the park closed or was bought out quite a few years ago. Anyone know the story ? Anyway, I was parked out there with friends listening to the Cardinals win the '82 World Series on KMOX. Fun place to party!"

Indeed, it seems that Mount Tabor Park was a fun place to party. That's why it was shut down.

Digging through Sharon Sander's "Out of the Past" columns, I found these newspaper clippings that explain what happened to Mount Tabor.

May 4, 1978: County authorities are considering ways of remedying problems stemming from night-time drinking parties in Mount Tabor Park on Bloomfield Road, says Sheriff James J. Below; county-owned park for some time has been popular spot for weekend beer parties.

May 5, 1978: Cape Girardeau County Court has ordered all county parks closed from 10 p.m. to 6 a.m. in initial effort to curb problems resulting from night-time drinking parties being attended by teenagers; action was taken after Sheriff James J. Below brought to court's attention party last weekend in Mount Tabor Park which was attended by about 300 people, many of whom were under age of 21.

Aug. 1, 1983: Cape Girardeau County Court agrees to vacate the Benton Hill Road near the former Mount Tabor Park; the park, just off Bloomfield Road west of Cape Girardeau, reverted to private ownership earlier this year after the Cape Special Road District said it no longer wanted to maintain the park.

I also found a story in the Bulletin Journal from 1979 mentioning Mount Tabor Park as one of several destinations for "Fall Splendor Week" sponsored by the Chamber of Commerce. The article says the park "includes a drive under a canopy of trees along Pecan Grove Road."

Google depicts Mount Tabor as a massive park, larger than any other existing park or golf course in Cape Girardeau. It's a shame that the city and county let it slip through their fingers.

Mount Tabor isn't the only blast from the past depicted by Google. Their maps still show a railroad line running right through the middle of town. 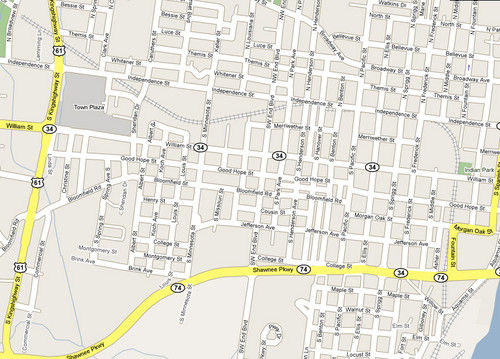 This railroad was built by Louis Houck, accidental railroad tycoon, as the Cape Girardeau Northern. The project was a financial disaster for Houck. The last vestiges of the bankrupt railroad, running from Arena Park to the river, remained as an industrial spur operated by the Missouri Pacific.

There's not much left of the old railroad. This overpass on Morgan Oak Street, now crossing a ditch, is the last major remnant of the railroad:

Until recently, the location of the rail crossings could still be seen (and felt) along Independence Street and Kingshighway where the pavement was rough. These traces have been removed by new construction, but a small section of the old rails can still be seen crossing Themis Street behind HealthPoint Plaza.

Missouri and Wisconsin are the only places with a statewide system of lettered "alphabet soup" highways. In Wisconsin, these roads are county-maintained, while Missouri's lettered routes are state-maintained secondary roads. This is often a point of confusion: the letters are assigned on a county-by-county basis, making it appear they are county roads.

This has led to confusion by Google as well. For example, at the infamous NUT Junction between Delta and Leopold, the Google map is a mess, trying to label everything as "Route Y" in addition to the correct names: 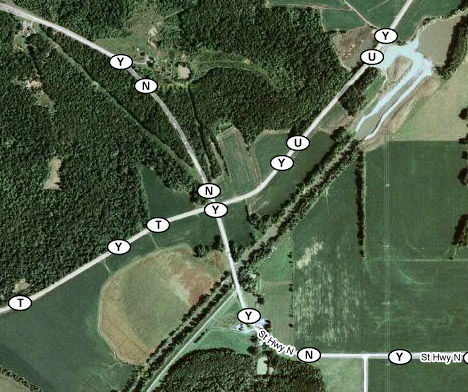 Here are a few other outdated things shown by Google:

* Prior to the opening of the Bill Emerson Memorial Bridge and approaches, Highway 34 was routed along William Street and Highway 74 Truck Route was routed along Southern Expressway. Google shows the new bridge, but clings to the old highway labels.

* The roundabout at Gordonville Road and Silver Springs is missing.

* Speaking of unsuccessful traffic experiments, up until a few months ago, Google showed Broadway and Independence as one-way streets.

Have you spotted anything else out of place on Google? Post your sightings below.