Historic markers at every corner

Drive through Arcadia Valley and it's hard to miss the red-granite blocks that are the construction material of choice for just about everything: buildings, footbridges, gates, and plenty of historic markers. 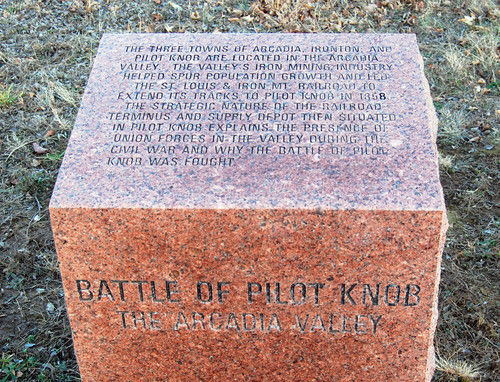 Occupying a strategic location during the Civil War, the Arcadia Valley saw more than its fair share of military action. The towns of Arcadia, Ironton and Pilot Knob are now filled with historic markers for every skirmish and event during the Civil War.

Iron County experienced a boom just prior to the war thanks to its namesake: iron mining. Surveyors in the 1840s and 1850s believed that Pilot Knob Mountain and nearby Iron Mountain were composed of solid iron ore, with one source boasting that they "have enough material in their bowels to supply the world for a century." An estimate from 1859 suggested that Iron Mountain might be worth 5 billion dollars!

In order to tap into this bonanza, the St. Louis, Iron Mountain, and Southern Railroad was chartered in 1851. The railroad reached Pilot Knob on April 2, 1858, but plans to continue building south where halted by the Civil War. 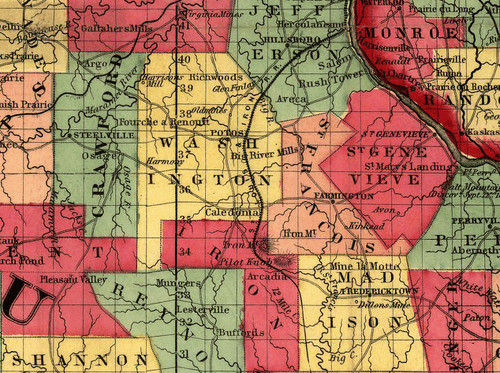 This ca. 1859 map shows the route of the railroad.

The "Iron Horse" brought prosperity to Iron County, but it also brought suffering during the Civil War. Thanks to the railroad terminus and mining industry, Arcadia Valley found itself in the crosshairs of both sides.

After the Civil War officially started at Fort Sumter in April 1861, it wasn't long before the Union arrived on the scene at Arcadia Valley. A small fort, first called Fort Hovey but later renamed Fort Curtis, was established at a high point in Arcadia, providing a clear view of the valley and Pilot Knob. 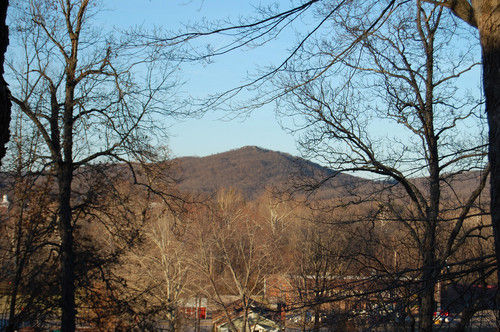 Pilot Knob is easy to spot from the old fort.

The site of Fort Hovey/Fort Curtis, known today as "Fort Hill", is occupied by the Fort Hill Apostolic Church. No surprise, a historic marker can be found here.

Driving directions: Take Highway 72 west into Arcadia. Just after crossing the viaduct, make an immediate left on College Street, then a quick right on Church Street. Fort Hill is at the high point at the end of the street.

It's not unusual to find historic markers at a courthouse square, but Ironton offers a bonus: original damage from a Civil War artillery shell. Completed just prior to the war, the courthouse withstood heavy back-and-forth fighting, but the facade was damaged by a Confederate artillery barrage into Ironton. 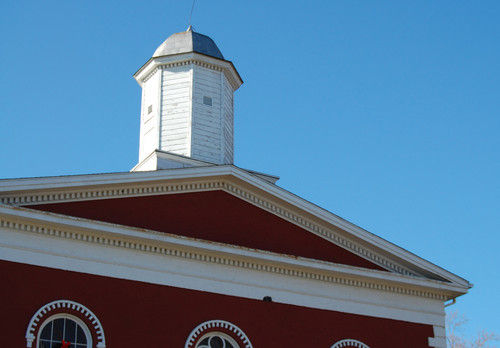 Grant Was Here. So Was Emerson.

A parcel of land just south of the Ironton courthouse played roles in the careers of two famous, but unrelated, people.

Ulysses S. Grant's military career had humble beginnings at Ironton, his first command as brigadier general. He remained in Ironton for only 11 days in August 1861, but it was here that he received word that his appointment as brigadier general by Abraham Lincoln had been confirmed. 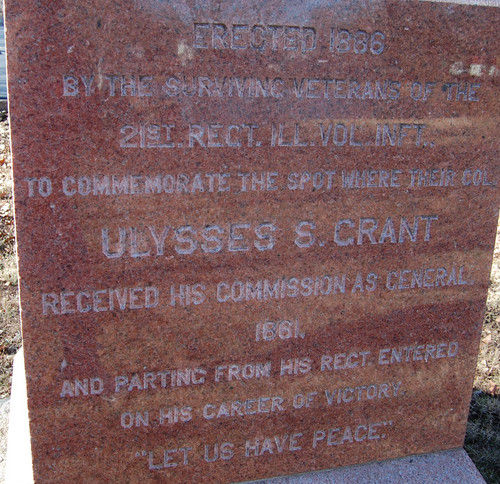 No surprise, a historic marker and statue marks the spot where he received the good news, although it's hard to tell if the statue is supposed to represent Grant or just a generic Union soldier. 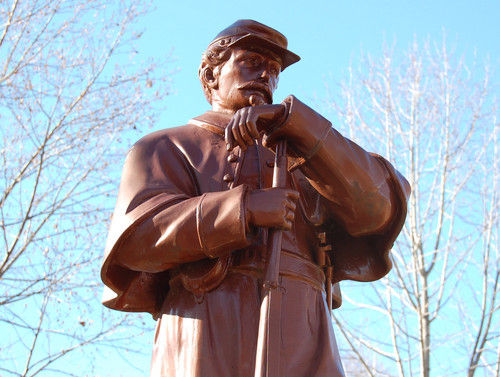 Grant's headquarters was located on the lawn of John W. Emerson's home. After the war, Emerson gained fame as the namesake of Emerson Electric Company.

In 1890, he met brothers Alexander and Charles Meston, who were working on a patent for an electric motor. They convinced Emerson to invest $50,000 in start-up capital to get their invention off the ground. Emerson served as the first president of the company until he retired in 1892. With the successful introduction of the first electric fan, the company quickly expanded to other products. It is now a Fortune 500 company still based in Missouri.

Curiously, this is one of the only points of interest in Ironton that doesn't have its own historic marker.

Driving directions: The site of Grant's headquarters and Emerson's estate is now part of the grounds of Ste. Marie du Lac Catholic Church. From the intersection of Shepherd and Russell streets at the southwest corner of the courthouse square, take Shepherd Street south one block to the church parking lot and then walk over the statue next to a picturesque lake.

Concerned that the Confederates in Arkansas may try to advance into Missouri, Fort Curtis was replaced by the more substantial Fort Davidson at the foot of Pilot Knob. In September 1864, Confederate general Sterling Price raided into Missouri, hoping to capture St. Louis. He decided to attack Fort Davidson, leading to the Battle of Pilot Knob. Technically a Confederate victory, it was a costly battle for the South and forced Price to abandon his goal of attacking St. Louis. 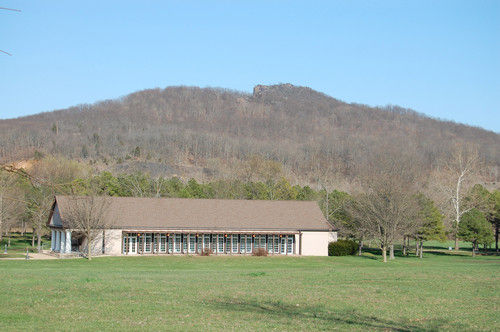 The distinctive summit of Pilot Knob rises above the Fort Davidson visitor center.

The fort's hexagonal earthworks are still intact, except for the giant hole in the middle where the powder magazine was deliberately ignited by the retreating Union army. 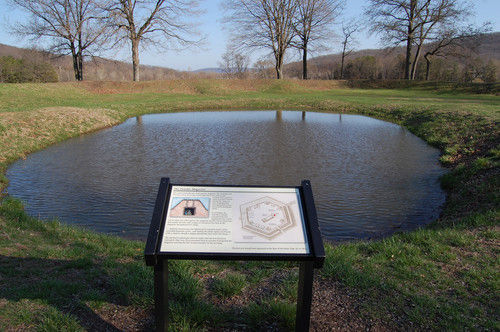 Located just a few blocks due north of Fort Davidson, the Immanual Luthern Church served as a Union hospital during the battle and possibly even as Union headquarters. Yet another red-granite historic marker tells the story. 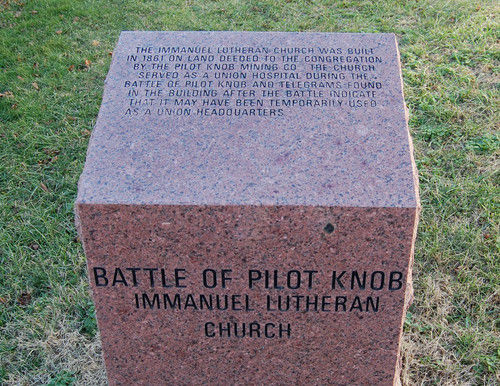 Fort Davidson State Historic Site publishes a driving tour giving directions to all of the historic markers in Arcadia Valley, including several more not mentioned here.

If you're visiting Fort Davidson or nearby Elephant Rocks, be sure to check out some of the other historic markers and sites in Arcadia Valley.