Answers to the Impossible Quiz

Here are the answers to last week's quiz. One person told me they could identify all but one of these places, so maybe the quiz wasn't so impossible after all:

1. Somewhere along the Mississippi River

Question: This scenic outcrop is visible when the river is low enough. Can you figure out where this photo was taken? 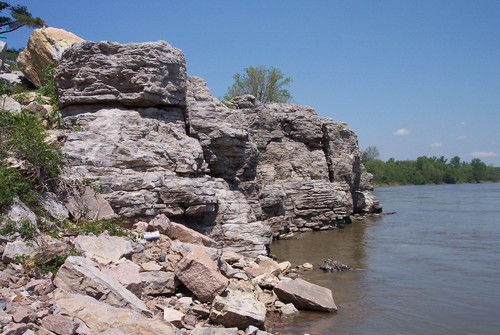 Answer: This scenic outcrop is at the foot of Cape Rock when the river level is low enough at Cape Girardeau. The main portion of Cape Rock was destroyed when the railroad was built, but these remaining rocks provide a glimpse of what the landmark would have looked like.

2. The Mini-Me Version of the Statue of Liberty

Question: What town square features this Statue of Liberty replica? Hint: The town didn't exist prior to the 1940s. 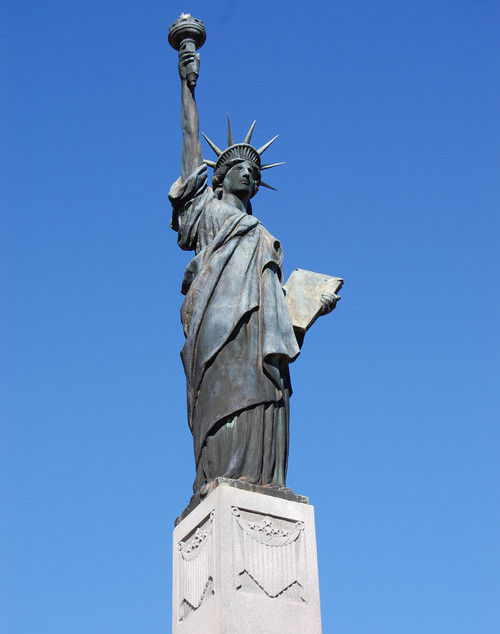 Answer: This replica statue is part of a war memorial in front of the Wayne County Courthouse in Greenville. When Lake Wappapello was constructed in the 1940s, the original site of Greenville had to be relocated to make way for the lake. The town and courthouse were re-established a couple miles to the north at "New" Greenville. Even though this courthouse is newer compared to most, it is not in very good shape. When this photo was taken, the rightmost window on the first floor was damaged and somebody had taped a note saying "FIX ME." 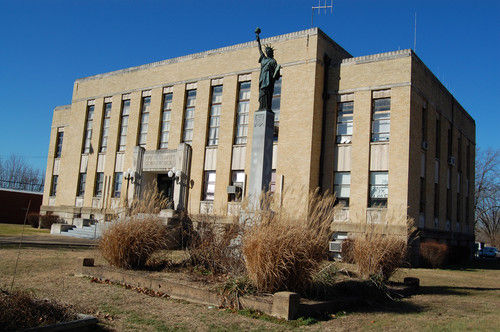 Question: This peak played an important role in Missouri history during the 1800s. Where is it? 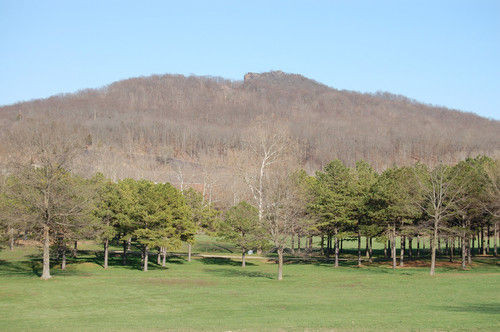 Answer: The mountain is Pilot Knob. In the 1840s, it was believed that Pilot Knob and nearby Iron Mountain were filled with solid cores of iron. The iron mines were so important that the St. Louis, Iron Mountain and Southern Railroad was built to Pilot Knob to take advantage of the iron mines. Located at the terminus of the railroad during the Civil War, Pilot Knob was strategically important, leading to the construction of Fort Davidson and the resulting Battle of Pilot Knob.

4. Cemetery with a view

It's not very often you find a private cemetery with its own panoramic view of the Mississippi River. Who is buried here? 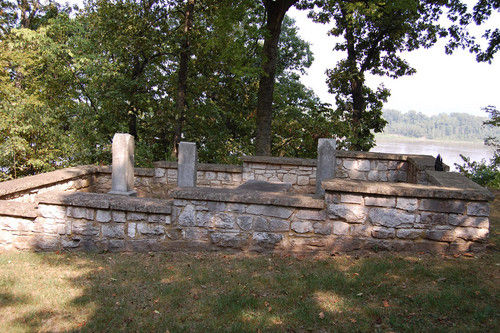 Answer: Located in Herculaneum, this is the final resting place of Missouri Governor Daniel Dunklin. The namesake for Dunklin County, he served as the state's fifth governor. The cemetery is now a very tiny state historic site wedged in the middle of a subdivision. 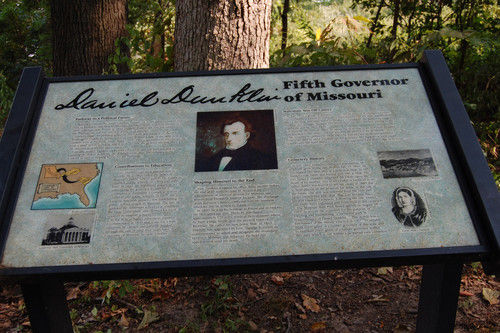 5. Unnatural sight along a nature trail

Question: When you visit a natural area, you generally don't expect to find a pile of old radiators. Where is this place? 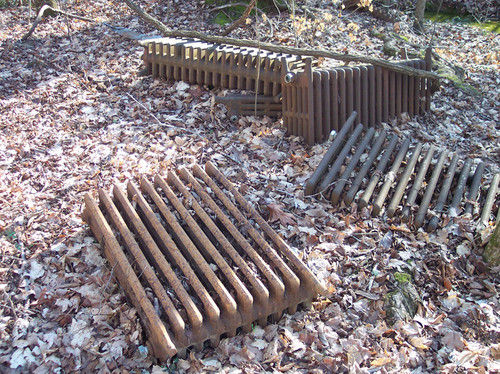 Answer: The Johnson Tract Nature Trail at Lake Wappapello features relics from several farmhouses that once stood along an old road just outside of Old Greenville. I've found stone foundations, retaining walls, stairs, culverts, utility poles, and other oddments along the trail. These were all left behind when the area was abandoned to make way for Lake Wappapello. Here is a stone wall next to the trail: 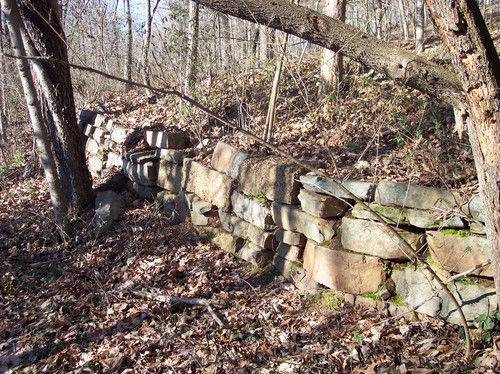 6. When they say "Bridge Closed", they mean it

Question: The flatlands of Southeast Missouri have lots of wooden bridges crossing small drainage ditches. This one has suffered a partial collapse. Which county owns this bridge? 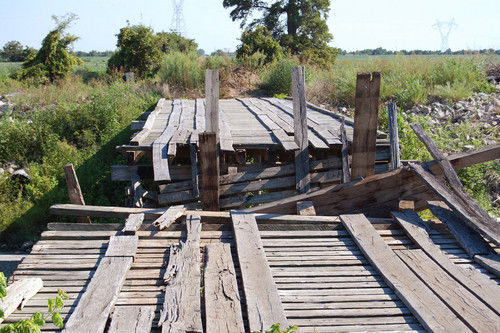 Answer: This damaged bridge is in Pemiscot County, on County Road 411 south of U.S. 412 between Kennett and Hayti. Inexpensive to build, these simple wooden bridges have been popular in rural Missouri throughout history, but they aren't the most robust. Here's another example of a wooden bridge disaster in Missouri. Let's not forget about this this crazy photo that has been widely circulated on the Internet.

7. Not just a property line

Question: It's not unusual to find stakes marking the corners of property boundaries. But this one marks something unusual. What is it? 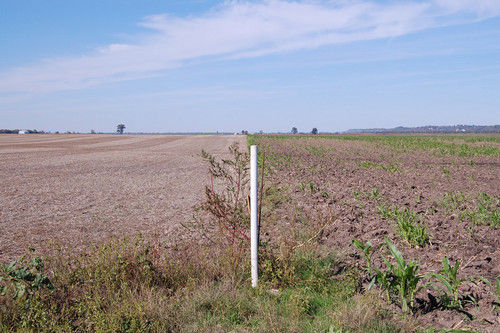 Answer: This is the state line between Missouri and Illinois. The Mississippi River is nowhere to be seen, but it once flowed here. The following topographic map shows the location of the boundary, labeled as "indefinite", just north of Belgique in Perry County (I've circled the location of the post): 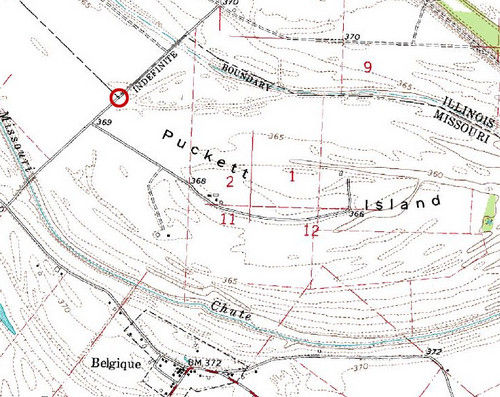 I can't explain why the boundary makes two sharp turns here to follow a county road (the river never would have done that!). The boundary might be "indefinite" according to mapmakers, but I bet property tax collectors know exactly where Missouri ends and Illinois begins down to the last inch. There are several places along the Mississippi River where these boundary anomolies occur. In most cases, Missouri has gotten the short end of the stick.

8. All roads lead to Cape

Question: Where is this street sign located and why is the road named for Cape Girardeau? 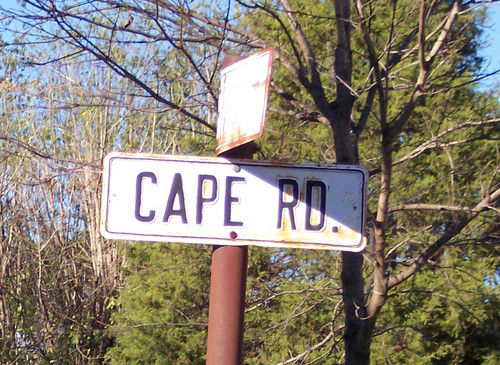 Answer: Cape has a Bloomfield Road, which really did run to Bloomfield in Stoddard County. It makes sense, then, that the opposite end of the road in Bloomfield would be called Cape Road, where it is still marked on street signs. Many portions of the original Cape-Bloomfield Road still exist, although much has changed since Bloomfield was founded in 1835.

Question: This is a classic steel truss bridge with a scenic view. Where is this? 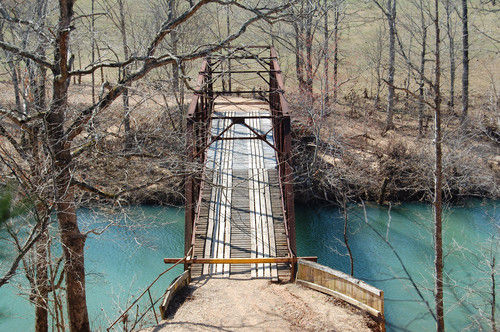 Answer: Lowndes in Wayne County is home to Iron Bridge Conservation Area where this bridge sits. Probably built around 1910, it is now closed to traffic and faces an uncertain future. A trail leading to a small bluff overlooking the bridge provides a view of the clear-blue waters of Bear Creek. 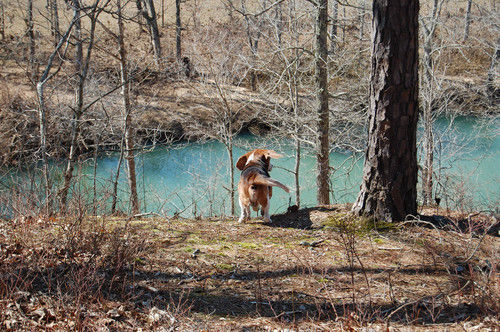 Question: Somebody with the initials J.L. carved his name into this stone in 1858. Why? 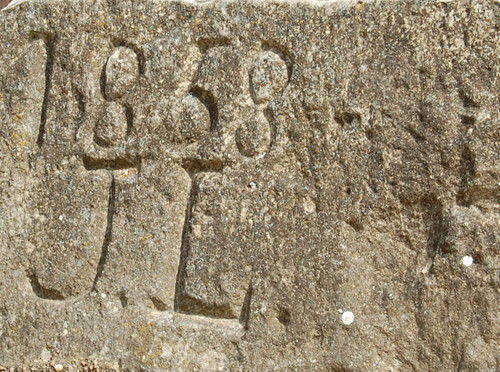 Answer: This is a cornerstone under the Burfordville Covered Bridge. It was built by prominent local architect Joseph Lansmon, with construction starting in 1858. It's not known when the bridge was actually finished, although it was likely delayed until after the Civil War. The location of J.L.'s cornerstone is circled in this photo: 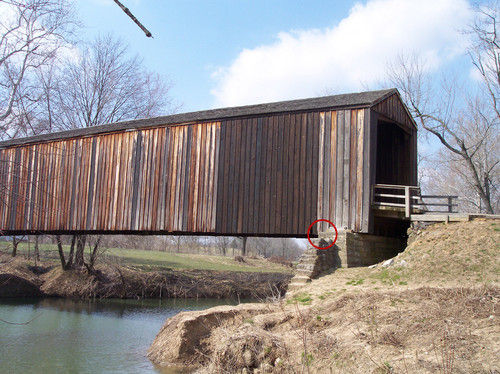