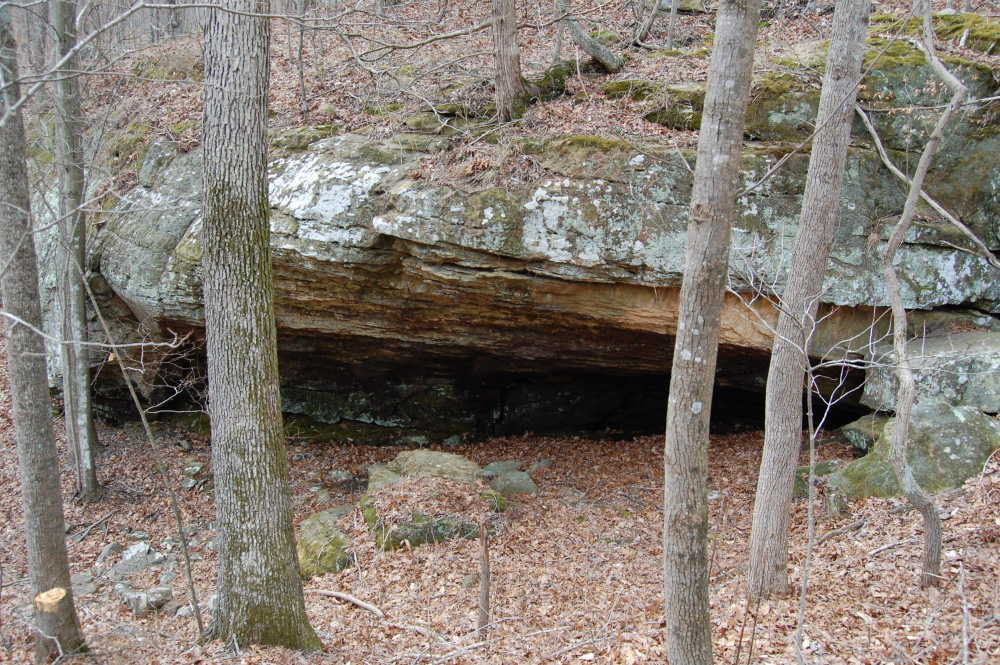 March is that wonderful time of the year when it is warm enough to go hiking, but cold enough to keep the biting insects and weeds away.

During the summer, the Cave Creek Trail near Pomona, Illinois, is a jungle of undergrowth. But right now, this former railroad grade provides an easy hike with a variety of things to see. 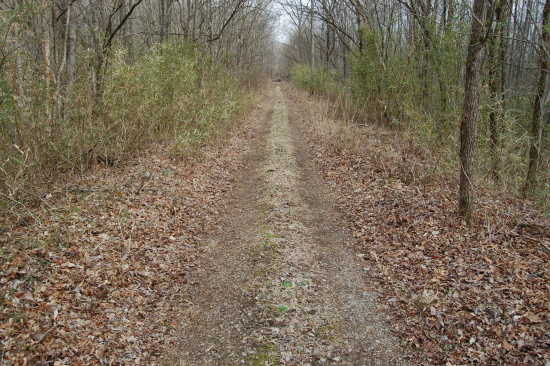 Southern Illinois has a long history of railroad construction. Completed in 1875, the Cairo & St. Louis Railroad was one of the longest narrow-gauge lines in operation at the time. It snaked through particularly difficult terrain between Murphysboro and Jonesboro, reaching a high point at the town of Alto Pass.

After the railroad was abandoned in 1981, much of the line was reclaimed by nature. However, a short segment at Alto Pass has been converted into a hiking trail called the Quetil Trail. Meanwhile, a stretch north of Pomona was retrofitted as an auto road, providing access through the Cave Creek Valley. That road has since been abandoned, cut in two by a missing bridge over Cane Creek. But it makes for a perfect hike.

The trail starts at a gate along the road to Pomona Natural Bridge. After hiking one-third of a mile, I spotted a series of rock formations on the left near an old crossroads. This looked like a good place to start exploring. 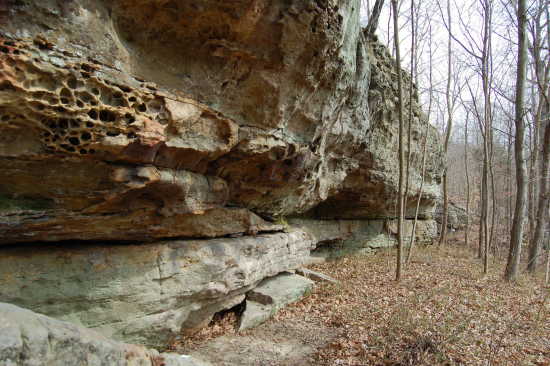 Walking uphill through the maze of sandstone rocks and walls, I reached a final bluff near the top of the hill. Roughly thirty feet tall, the bluff contains red and orange rocks, suggesting the presence of iron deposits. 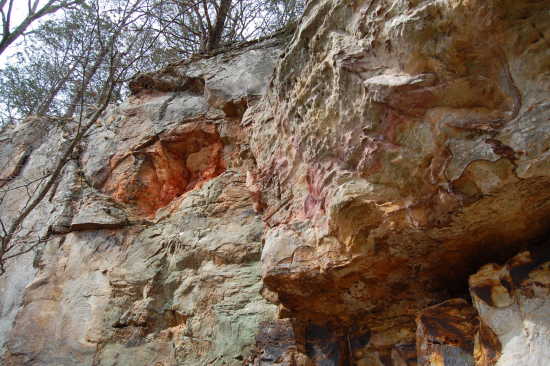 The bluff ends to the right, but continues a long distance on the left. I followed the rocks until they reached a sharp corner. 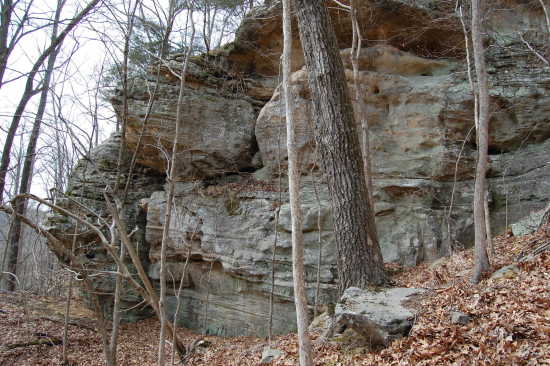 Worried that I was straying too far from the trail, I turned around and started back downhill. It didn't take long before I spotted this massive rock monolith, completely separated from the rest of the pack. 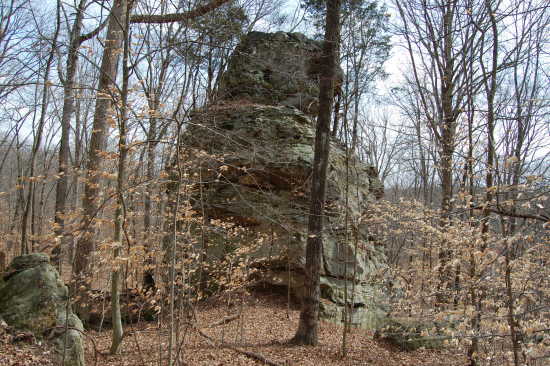 The woods are filled with several of these isolated rocks. I would call these Elephant Rocks if the name wasn't already taken in Missouri.

Back on the trail, the old railroad grade passes through a shallow road cut and then cross a narrow embankment. It reaches another set of tall bluffs on the left. 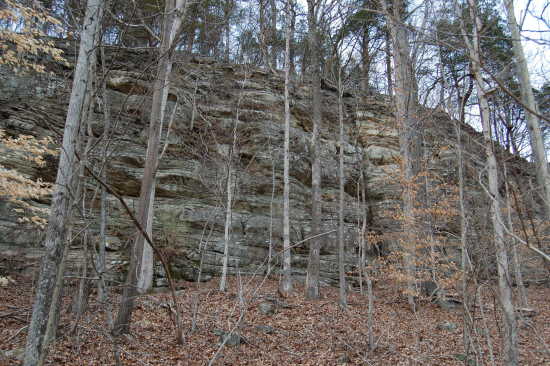 On the right is swampy ground surrounding Cave Creek. The creek is named after Saltpetre Cave, a large rock shelter used as an amphitheatre, but privately owned and not accessible from here.

I kept walking until the trail ends at the missing bridge over Cave Creek. While it's possible to wade across the creek and continue along the old railroad grade, I wasn't in the mood to get my feet wet, so I turned around. 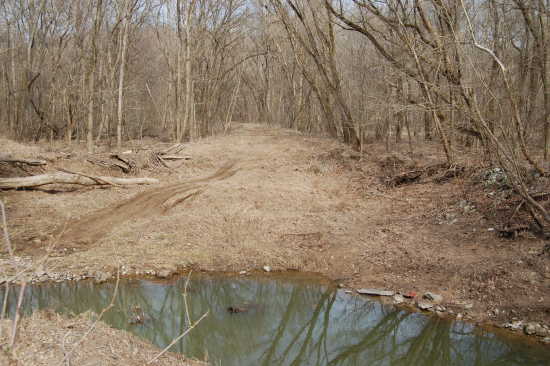 On the way back, I did some "bridge hunting" along the old railroad grade, hoping to find some artifacts from the railroad's construction. Sure enough, I found two stone culverts, almost certainly dating from the 1870s. 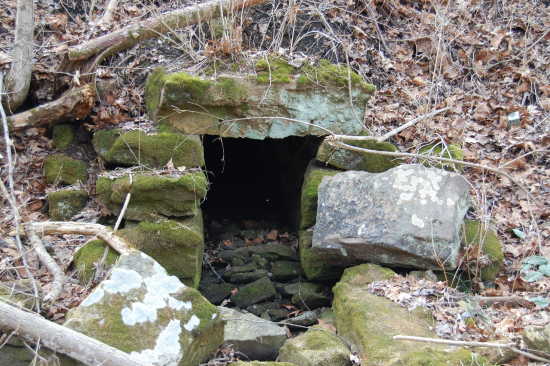 Both of the culverts have partially collapsed at one end. These are constructed using "post and lintel" design, where the "lintel" is the large rock across the top. These rocks extend along the entire length of the culvert, creating a tunnel of sorts.

I haven't explored the other end of the trail yet, but that's just another reason to come back again. With plenty to explore, this is a great off-the-beaten-path trail to visit -- during the right time of year.

1. From Cape Girardeau, cross the Emerson Bridge and take Highway 146 through McClure and Ware toward Jonesboro.

3. Look for the turnoff for Pomona on the left.

4. At the tiny village of Pomona, turn right at the stop sign, following the signs for Pomona Natural Bridge.

6. Soon after the road crosses the creek, look for the gate on the right. This is the start of the Cave Creek Trail. Park in front of the gate, dodging the large mudhole. (If it's not possible to park here, then try to find another place along the road. The Forest Service has a bad habit of making it difficult to use trails like this -- but I'll save that rant for another blog.)

The trail is roughly 1.1 miles from the gate to the missing bridge. If you can cross the creek, the trail continues for (I think) another mile or so before entering private property.