The "other" inauguration: reporting live from Jeff City

With an attendance measured in the thousands instead of the millions, Missouri Governor Jay Nixon's inauguration isn't quite as elaborate as President-elect Barack Obama's.

However, Jefferson City has one huge advantage over Washington, D.C.: it's actually possible for normal people to get close and see something.

The first event for today's inauguration was a short parade leading to the Capitol square. It was a low-key affair, with Jay Nixon and his wife strolling to their ride (a Mustang convertible) without any fanfare or security barricades.

Just try getting this close to Barack Obama without a VIP pass and multiple security checkpoints.

Nixon seemed somewhat uncomfortable riding in a convertible with the top down in 30-degree weather. At least the inaugration wasn't scheduled for this Thursday, with a forecasted high of 15 degrees. 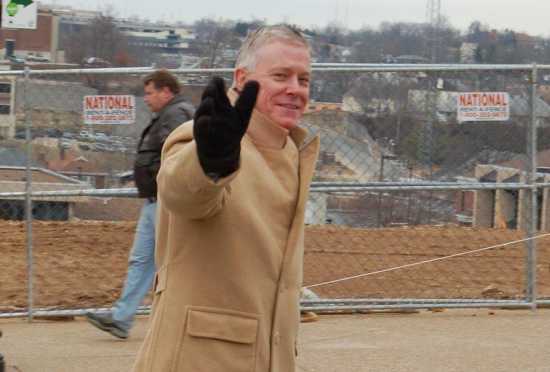 The inauguration ceremony started soon after the parade. With a fairly

small crowd, seating was available for most everybody. (You won't find

During the ceremony, the old (Matt Blunt) and the new (Jay Nixon) made a grand entrance down the Capitol steps. This must have been an awkward moment for soon-to-be-former-Governor Blunt.

The ceremony actually ran fast, requiring a break for several minutes before Nixon could be sworn in at noon, as required by the state constitution. When the clock tower rang twelve times, the Blunt Administration officially became the Nixon Administration. The big moment, the oath of office, only took seconds, although Nixon did flub one of his lines slightly.

His inaugural address was mercifully short.

The shivering crowd would not have tolerated a long-winded speech.

In fact, the event went so rapidly that the master of ceremonies said, "We're ahead of schedule and under budget." This had to be a dig at the extravagant inauguration by former governor Bob Holden, who just happened to be one of the VIPs present (that must have been a really awkward moment for him as well).

Next on the agenda for the afternoon was a "reception" at the Governor's Mansion, a first-ever "potlatch dinner" at the Capitol Plaza Hotel, and then the traditional Governor's Ball under the Capitol rotunda. More on that in the next blog.