Not Your Town: Original site of New Madrid

It may be hard to believe, but when it was founded in 1789, the town of New Madrid seemed destined to become one of the most important cities in the Midwest.

But then politics got in the way.

And then the earthquakes came.

Now the original location of New Madrid is under the Mississippi River.

Looking from the riverfront of the modern town, the old town site is somewhere under the water toward the Kentucky shore. 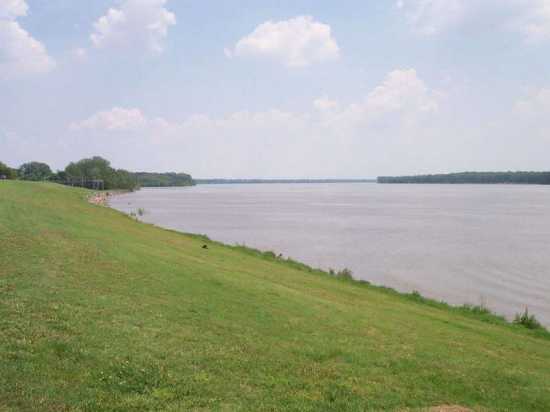 The first incarnation of New Madrid was known as "L'Anse a la Graisse" or "The Greasy Bend." It was settled in the 1780s by Francis and Joseph Lesieur, two French Canadians who established a trading post here to trade furs with the Indians.

It was Col. George Morgan in 1789 who chose the name New Madrid after the city in Spain. It's not clear if the town's peculiar pronounciation dates back to Morgan or came later by American settlers who always had difficulty saying foreign placenames correctly.

Morgan had big plans for New Madrid. He had secured the blessing of a Spanish official to establish a colony in Spanish territory, which he hoped could attract at least 100,000 settlers within a decade. And how would he get so many immigrants? Morgan's colony would have no taxes, the right of self-government, and free land for early settlers.

As originally planned, the colony would include over 12 million acres of land, spanning much of what is now northern Arkansas and southern Missouri north to Perry County.

Early in 1789, Morgan arrived with a group of colonists and started to survey New Madrid. He devised a system of surveying land into rectangular areas marked with meridian and range lines. This basic method was later used by the United States to survey Ohio and other states as the country expanded westward. It's not clear if Morgan invented this system, or merely adopted it, but one contemporary observer did note that his method was "superior" to the one under consideration at the time in the U.S. Congress.

New Madrid was envisioned as a grand city featuring wide boulevards, public spaces, and even a hint of environmentalism. The streets (60 and 40 feet wide) were laid out in a grid with plenty of room for growth. Morgan liked trees, ordering that "the timber, trees, and shrubs now growing thereon shall be religiously preserved as sacred, and no part thereof shall be violated or cut down, but by the personal direction and inspection of the chief magistrate..."

With its convenient location on the Mississippi River, direct shipping access to the bustling port of New Orleans, a friendly government, and an abundance of good farm land, New Madrid was poised for greatness. A prospectus sent to potential settlers from the U.S. boasted, "This new city is proposed to be built on a high bank of the Mississippi river, near the mouth of the Ohio, in the richest and most healthful part of the western country..."

But Morgan's scheme was quickly derailed by political intrigue. General James Wilkinson had his own dreams for a personal empire on the frontier and Morgan was beating him to it. He complained to his close friend, the governor of Louisiana, Estavan Miro, about what was happening. Gov. Miro was outraged that Morgan had the audacity to create and name his own city (a privilege that only the King of Spain should possess). In a letter dated May 23, 1789, Miro stated bluntly to Morgan, "How wide a difference is there between what you did and what you had a right to do."

Morgan's plans in shatters, he left and went back East. He died before the earthquakes hit.

Miro didn't abandon New Madrid, however, and sent a detachment of soldiers led by Pierre Forcher to re-establish the town, build a fort, and "receive all immigrants favorably." The population started to grow, with 129 new settlers arriving during the first four months of 1791.

New Madrid still had the potential to became an important place. However, the town had a small problem with the Mississippi River: the river kept encroaching northward. A map from 1796 shows the town and its fort, with the notation, "Fort part of which is already carried off by the waters."

Then the earthquakes hit. The first three, on Dec. 16, 1811, were epicentered to the south, near Blytheville, Steele, and Caruthersville. A fourth on Jan. 23, 1812, struck near Hayti. And then the "Big One" hit on Feb. 7, 1812 at 3:15 AM, wiping out all of New Madrid. The magnitudes of the quakes can only be estimated, but they were probably in the high 7's or even low 8's. These were just the major earthquakes; the aftershocks were so numerous that it probably felt like the ground was always shaking.

According to the New Madrid Fault Finders Guide, the site of New Madrid dropped 12-15 feet. If that wasn't enough, flooding during the spring of 1812 washed the remains away.

New Madrid County was established as one of the first five counties of Missouri on October 1, 1812. But the town of New Madrid was in no shape to be a county seat.

The county seat was established at a town called Winchester, founded in 1814, somewhere in the vicinity of modern-day Sikeston. It may have been named for William Winchester, one of the justices of the court of common pleas. County records indicate that court was held at a "courthouse" in Winchester on April 12, 1819. As an aside, Highway 61 in Benton is known as Winchester Street and would have been the road connecting Benton with Winchester, both county seats at the time.

Winchester didn't last long, however, and the county seat was permanently moved to New Madrid in 1821. But now the land was much different. The bountiful farmland was replaced by "Swampeast Missouri" thanks to the earthquakes. Maps from the 1820s and 1830s show massive areas of swampland all around New Madrid. Some even show a feature called "Earthquake Lake" near the town.

Since then, New Madrid has been a pretty sleepy place, except for occasional grumbles from the New Madrid Fault and the fifteen minutes of fame thanks to Iben Browning.

But what if New Madrid didn't have an earthquake fault? Or if the Spanish government had been more friendly to George Morgan?

American history might be completely different. New Madrid might be the size of St. Louis, Cape Girardeau might not exist, and the Mississippi River might be an international border between the United States and Spain.

The Earthquake America Forgot (1995) - By David Stewart and Ray Knox

Encyclopedia of the history of Missouri (1901) - By Howard Louis Conard