Not Your Town: Gads Hill, Missouri

Reporter Peg McNichol has been working on a series of stories called Your Town, profiling local towns, such as Jackson and Delta.

But what about the really obscure towns, those that appear in Flyspeck-3 on maps (if they're lucky)? This blog, of course, is all about obscure places to visit. So with that in mind -- and with a nod to April Fools Day -- I'm kicking off a new series called Not Your Town, profiling local wide spots in the road that have seen better days.

We start in Gads Hill, a hamlet along Highway 49 north of Piedmont in Wayne County. At its peak, this placename only had a handful of houses and businesses, and today it has even fewer.

The town's namesake is Gad's Hill in Kent, England, the setting for a highway robbery in Shakespeare's Henry IV Part I.

How fitting, then, that Gads Hill in Missouri (somehow losing the apostrophe) was the setting for another kind of robbery on January 31, 1874. Jesse James and friends picked this location for the first train robbery in Missouri. 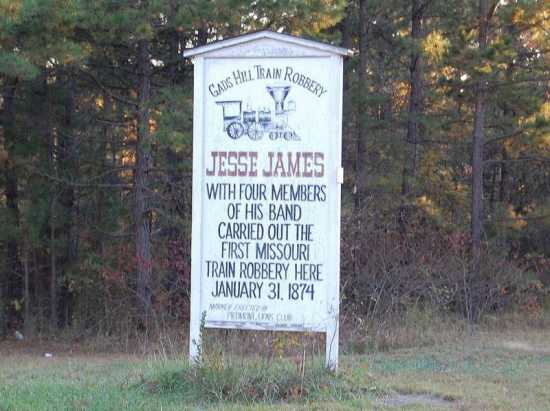 Gads Hill was the high point along the Iron Mountain Railroad between Des Arc and Piedmont. This made it the ideal spot for a hold-up.

In this article in Wild West Magazine, author Ronald H. Beights explains in gory detail how the robbery went down. Five masked men rode into Gads Hill and took control of the town and railroad station. They threw a switch so that the next train would be shunted to the siding and forced to stop. Then the robbers proceeded to... well, rob the passengers at gunpoint.

What was most ingenious about the robbery, however, wasn't the robbery. It was the public relations.

The gang handed one of the passengers a pre-written press release so that the newspapers would get their facts straight. Supposedly, it read:

THE MOST DARING
ROBBERY ON RECORD
The south bound train on the Iron Mountain railroad was boarded here this evening by five heavily armed men and robbed of _ dollars. The robbers arrived at the station a few minutes before the arrival of the train and arrested the agent and put him under a guard and then threw the train on the switch.
The robbers were all large men, none of them under six feet tall. They were all masked and started in a southerly direction after they had robbed the express. They were all mounted on fine blooded horses. There's a hell of an excitement in this part of the country.

Of course, the press release took some liberties with the truth. The gang rode northwest, not south, after the hold-up. Not that anybody would expect the gang to broadcast their real destination to the authorities. The phrase "hell of an excitement" was correct, however, as word spread to newspapers across the country and Gads Hill became the focal point of a national media frenzy. The robbery elevated Jesse James to the level of celebrity.

The James gang tried to position itself as a modern-day band of Robin Hoods, stealing from rich, lazy capitalists while sparing women, children, and hardworking men. At the beginning of the hold-up, the robbers announced they would uphold this principle, but by the end it was clear that they were willing to steal from anybody. The Jesse-James-as-Robin-Hood myth, however, took hold at Gads Hill.

Today, an historic marker along Highway 49 is the only remnant from that fateful day in 1874. The Iron Mountain Railroad -- now Union Pacific -- is still in operation, but the line was altered after World War II to accommodate higher-speed trains. It now cruises through Gads Hill on a higher grade and jumps over Highway 49 at a concrete overpass. 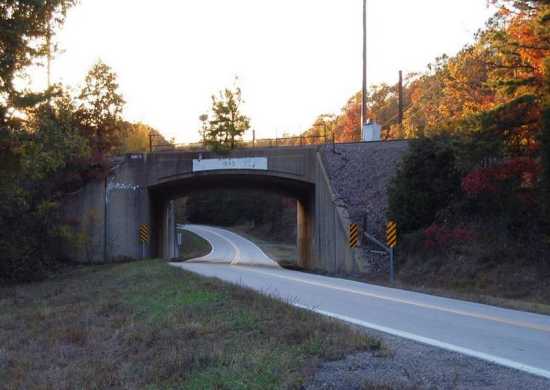 Even the name Gads Hill was almost lost to history. The town and post office changed to "Zeitonia" from 1887 to 1906 before reverting back to Gads Hill. The post office remained in operation, off and on, before shutting down for good in 1940.

To reach Gads Hill, take Highway 34 west from Cape Girardeau all the way to Piedmont. At the intersection with Highway 49, continue straight on Highway 49 North, crossing the viaduct over the railroad tracks. Continue on 49 for roughly six miles and look for the Jesse James historic marker on the right, in front of a tavern. [Google map]