Ten more state parks I'd like to see created

Recently I posted a Top Ten list of places I'd like to see developed into state parks or conservation areas. I soon realized that I had forgotten a couple places that I originally wanted to feature. After doing some more research, I've put together a second list of ten candidates, and I might have enough for a third installment in the future.

Overlooking the Mississippi River, Fountain Bluff rises above Grand Tower, Illinois, and stretches north to the town of Gorham. This large hill is completely cut off by a floodplain from the rest of the Shawnee Hills. Much, but not all, of the hill is part of the Shawnee National Forest. However, despite featuring a tremendous overlook of the river, numerous bluffs and rock formations, secluded canyons, archaelogical sites, and an abandoned railroad grade, Fountain Bluff is largely undiscovered by tourists.

Taking Highway 3 north from Grand Tower, look for Happy Hollow Road on the left. This road passes through private farms before entering National Forest land and climbing a steep grade to the top of Fountain Bluff. This is the reward at the summit: 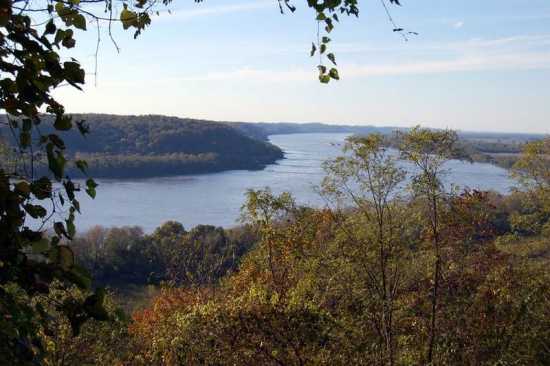 In addition to the river overlook, Fountain Bluff offers plenty to see from below. From Highway 3, follow the signs for Gorham and make a left on Second Street. This side street turns into Fountain Bluff Road, which follows the foot of the bluff parallel to an old railroad grade, passing several cliff faces and canyon entrances. 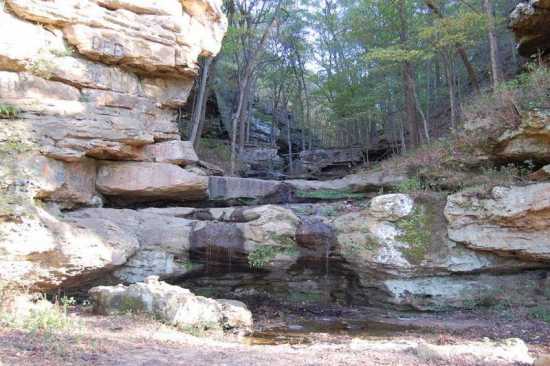 The west edge of Fountain Bluff is a mix of private and National Forest land. With some trails, signage, and careful development, the whole area could become a tourist magnet for Southern Illinois.

Don't laugh, but the small hamlet of Patterson in Wayne County, Missouri, was once a strategic location during the Civil War. Sitting at an important crossroads with routes leading to Cape Girardeau, Ironton, Springfield, and into Arkansas, the Union established a fort on a hill overlooking Patterson and the surrounding valleys. Completed in 1863, the fort was raided twice by Confederate forces in April 1863 and September 1864.

The Wayne County Historical Society purchased the site of the fort and has developed it into a small park. Some of the earthworks can still be seen at the top of the hill. 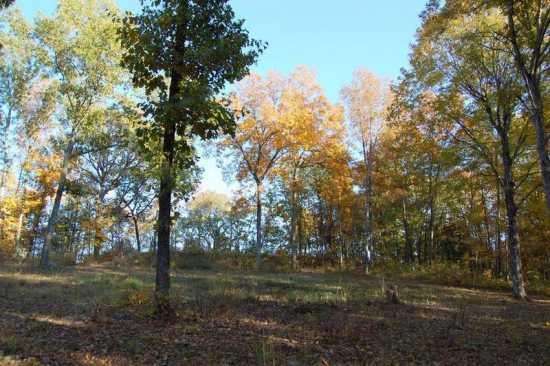 While the historical society has done a fine job of preserving the fort with their limited resources, Fort Benton still languishes in obscurity and could greatly benefit by being developed into a state historic site.

The stretch of the Mississippi River between Thebes, Illinois, and Commerce, Missouri, is quite unique for this part of the continent. Here, the river squeezes between two hillsides. Just about everywhere else, the Mississippi is flanked on one or both sides by a wide several-miles-long floodplain. But here, at the "Thebes Gap", the river cut through the hills to find a more convenient route downstream. 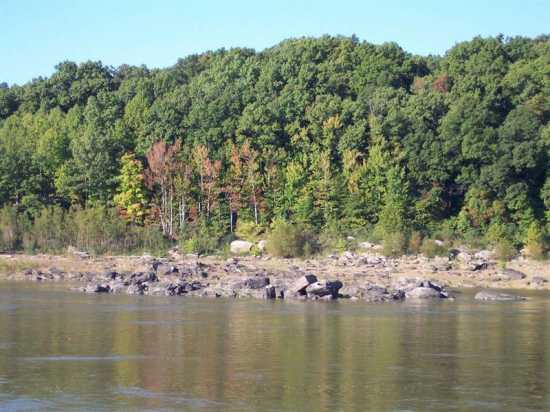 Thebes Gap was a notoriously dangerous spot for river pilots. It featured the Grand Chain, which Mark Twain described in Life on the Mississippi as a "chain of sunken rocks admirably arranged to capture and kill steamboats on bad nights." 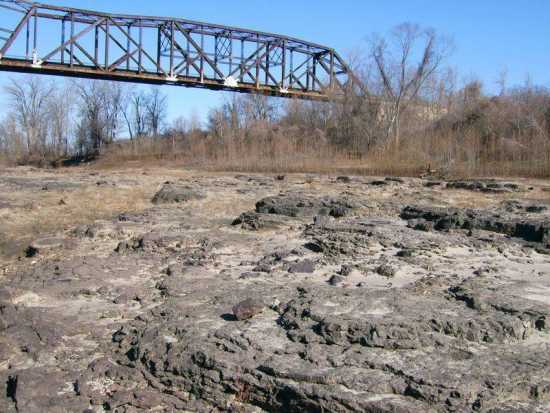 Like Fountain Bluff, the Thebes Gap area is filled with fascinating things to see, but is largely undiscovered. Between Thebes and Commerce lie:

* The site of a dynamite factory (at the lost town of Fayville, Illinois)

* Rock formations along both shores, best seen during periods of low water

* The historic Thebes courthouse, built 1848, with a commanding view of the river

* The Thebes Railroad Bridge, one of the busiest railroad crossings of the Mississippi and a marvel of civil engineering when it was completed in 1905

Thebes is also home to a place called Rock Springs Hollow. A creek cuts through a small rocky canyon on its way to the Mississippi River southeast of Thebes. In Missouri, a place like this would be called a "shut-ins." 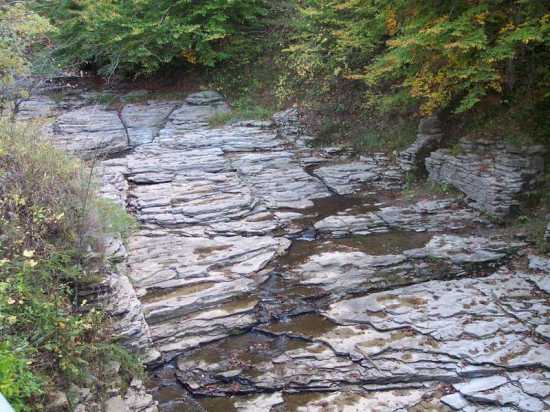 The area also includes large concrete blocks that were once the footings for a massive railroad trestle that provided an approach to the Thebes Railroad Bridge. While privately owned, the Rock Springs and railroad artifacts are well suited for a small park or conservation area.

At a place called "The Sinks" in Shannon County, Missouri, it's possible to take a boat ride through a natural tunnel. According to the book Geological Wonders and Curiosities of Missouri (p. 253), it's the only such navigable natural tunnel in Missouri. The Sinks was once a private resort, but is now closed to the public. With its close proximity to the Ozark National Scenic Riverways and the new Current River State Park, it would make a fine state park of its own.

The book Geological Wonders and Curiosities of Missouri also describes (p. 293) an unusual rock formation in Ste. Genevieve County very close to Hawn State Park. The author calls Chimney Rock "one of the most impressive isolated rock masses in Missouri" but laments that the area is privately owned and heavily posted against trespassing. It's not hard to imagine that Chimney Rock could make a perfect annex for Hawn State Park.

The small town of Gipsy in Bollinger County was once home to a private park along with two historic steel truss bridges. Now the park is gone and replaced by "No Trespassing" signs, the bridge over Castor River has been replaced by a boring concrete span, and the bridge over Lick Log Creek is derelict and on the verge of collapse, having barely survived this winter's flash flooding. 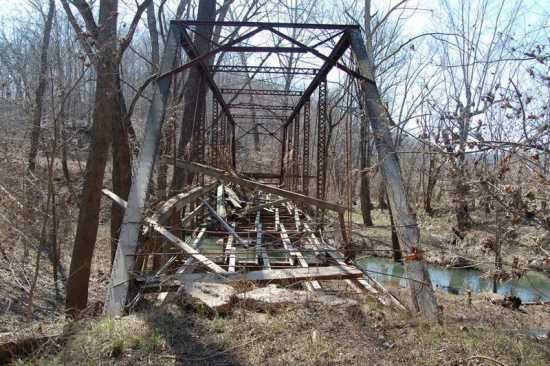 The old Gipsy Bridge Park could be made into a conservation area and fishing access from County Road 736. Meanwhile, the remaining Lick Log bridge, originally built 1900 at Zalma and likely the oldest bridge in Bollinger County, would make a nice candidate for moving to a new location as a footbridge.

Just east of Arcadia in Iron County, Highway 72 crosses above a shut-ins along Stouts Creek. With heavy traffic, little place to safely park, and imposing "No Trespassing" signs, the shut-ins can only be glimpsed by passing motorists. 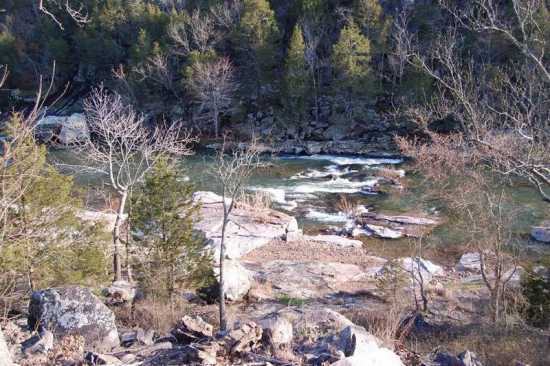 This gap along the road between Arcadia and Fredericktown was significant during the Civil War for troop movements involving Fort Davidson. It is also near the site of the first iron furnace in Missouri, established ca. 1816 by Corbin Ashebran. It's not surprising that iron mining played a key role in the history of Iron County and its county seat, Ironton. The Ashebran furnace was short-lived and nothing remains today.

The Department of Natural Resources owns a two acre parcel here but hasn't been able to do much because of a lack of access. Their long-range plans call for developing the site after Highway 72 is relocated to a new alignment, but that may take years or decades. It would be even better if DNR could somehow obtain even more land, including the entire shut-ins, and turn this into a state historic site or park.

Tourists always love to visit the highest point within a state. Missouri showcases its high point at Taum Sauk Mountain State Park. But what about the lowest point? We've got one of those too, at the southwestern tip of the Bootheel, along St. Francis River. Here the elevation is 230 feet above sea level.

Despite legends to the contrary, the Bootheel was not the result of a surveying mistake, but was deliberately made a part of Missouri thanks to the efforts of John Hardeman Walker. He wanted to live in the new state of Missouri instead of territorial Arkansas, and he was able to make it happen.

While there isn't much to see at the lowest point, it deserves at least a roadside marker and maybe a conservation area for river/fishing access.

The small town of Oriole in Cape Girardeau County is home to a peculiar topographic oddity: a hill cut on opposite sides by sheer bluffs above the branches of Little Indian Creek.

The larger creek branch has a flat, gravel bottom and makes for a nice swimmin' hole that is popular with Oriole-ites during warm weather. With a convenient parking area off Route Y, this is basically a park already, despite private ownership.

Do you know of any other places that would be suitable for a state park? Or places that are already on public lands that haven't been adequately developed? Let me know. You can post a message here, or take advantage of our user-submitted story system to submit a photo.