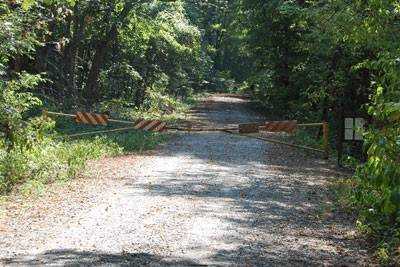 Just north of Wolf Lake, Illinois, you will find the Snake Road. The name says it all.

The road is flanked by 350-foot tall bluffs on the east side and flatland swamps on the west. Snakes like to hibernate in the bluffs during the winter. But in the summer, they feed in the swamps.

This provides the answer to the age-old question, "Why did the snake cross the road?" During the fall, nearly 35 species of snakes -- and other reptiles and amphibians -- migrate across the road to reach their winter habitats.

A two-and-a-half mile stretch of the Snake Road (also called LaRue Road or Forest Road 345) is closed to traffic during September and October for the snake migration. The road is still open to hiking, however. 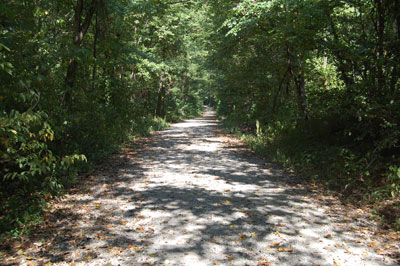 Don't expect to see hundreds of snakes wriggling across the road like some kind of bad horror movie. The migration is a slow process that lasts several weeks. A sign at the beginning of the road states,

The fall migration is not typical of the mass migrations of avian populations such as Canadian geese. Numbers often do not exceed more than twelve individuals at any given time. The migrations begin slowly. The first mornings in early September trigger of departure of the early migrants. Migration levels often fluctuate depending upon weather conditions. Research documented the main migration occurs about September 15th and usually peaks between October 15th and 25th. During this time the migrations seem to occur in waves.

When I visited last Saturday (Sept. 22), I didn't see any snakes at all. However, the migration is probably hehind schedule because of the near-record heat of late. I guess this means I'll have to make another visit.

If, like many people, you have a touch of ophidiophobia (fear of snakes), then you may want to steer clear of the Snake Road. However, LaRue-Pine Hills is still a scenic destination.

Driving down Big Muddy Levee Road, the Pine Hills bluffs appear almost out of nowhere as you round a curve. 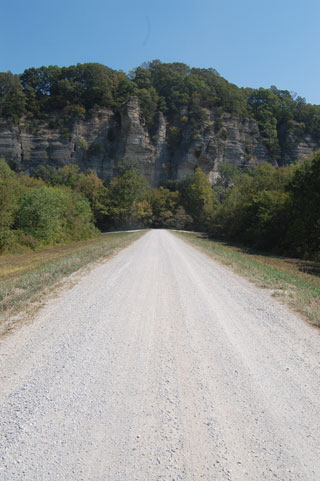 The rock pinnacle at the top is called Inspiration Point. 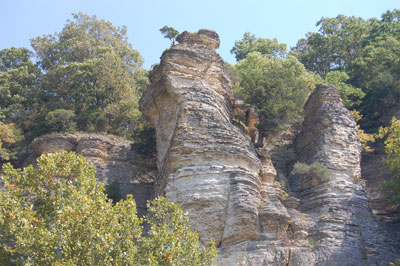 It's possible to reach the top of the bluff by turning left on LaRue Road and then right on Pine Hills Road. This road climbs into the hills using two switchback curves. The short Inspiration Point Trail leads to the cliff face. From here, the levee road can be seen directly below. 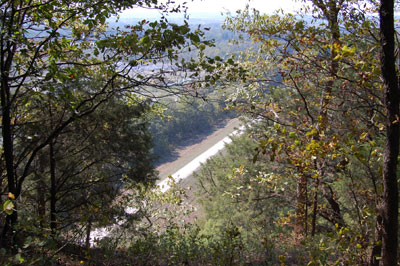 Continuing along the trail, another vantage point provides an excellent view of the Mississippi River valley looking north toward the town of Grand Tower. If you squint your eyes, you can see the Grand Tower Pipeline Suspension Bridge, reportedly the longest such bridge in the world. 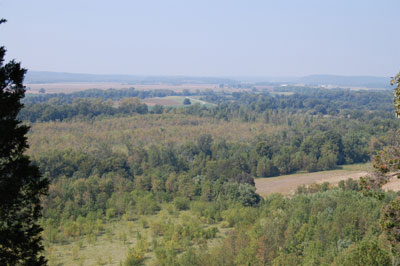 From Cape Girardeau, take the Emerson Bridge into Illinois and turn left at the Highway 3 intersection. Follow Highway 3 north through McClure, Ware, and Wolf Lake. After Wolf Lake, look for the "LaRue-Pine Hills" turnoff on the right. This road (LaRue Road) leads to the south gate of the Snake Road, currently closed to traffic.

To reach the Pine Hills bluffs, continue on Highway 3 to the bridge over Big Muddy River. Take the gravel road (Big Muddy Levee Road) on the right immediately before the bridge. This gravel road leads to Inspiration Point and the north gate of the Snake Road.