What a busy weekend

This was certainly an interesting weekend for Cape Girardeau County, featuring the dedication of the oldest Protestant church west of the Mississippi, plus a visit from the largest diesel towboat ever constructed in the United States.

It may seem hard to believe, but Jackson is the home to both the oldest Baptist and Methodist churches west of the Mississippi River.

Prior to the Louisiana Purchase, this area was under the control of Spain. His Catholic Majesty, the King of Spain, couldn't allow the American settlers to openly worship in Protestant churches. It wasn't until after the U.S. took control that Protestant church congregations could legally form.

That log church has been restored using some of the original logs from the 1806 building. It was dedicated on Saturday in an event that brought Baptist leaders and Gov. Matt Blunt to town.

The location is hard to find, tucked away on a hillside behind the Jackson industrial park. From the big Highway 25/34/61/72 intersection, go south on Highway 25 a short distance and turn right on Jackson Trail. At the end of the road, turn left on Lee Avenue and continue until it turns to gravel. A short distance later, make a left on an unmarked gravel lane, go past the "No Dumping" sign and cross the creek on a concrete low-water bridge. Follow this lane up the hill to the church parking lot. 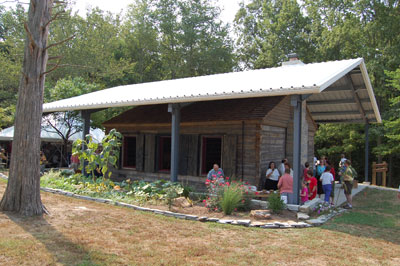 The restored church is covered by a protective awning. 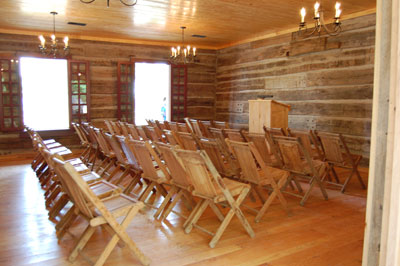 Peeking inside the one-room church

Constructed in 1993, the M/V Mississippi is the flagship of the U.S. Army Corps of Engineers. As this story explains, the boat is cruising down the river for a low-water inspection tour plus a series of public meetings.

The boat held an open house Saturday morning at the Cape Girardeau riverfront, including guided tours of the pilot house and engine room. With a length of 241 feet and a beam (width) of 58 feet, the M/V Mississippi is an impressive sight. 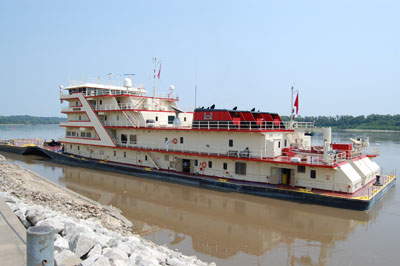 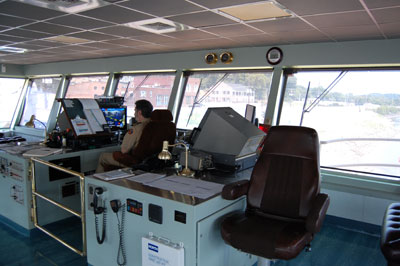 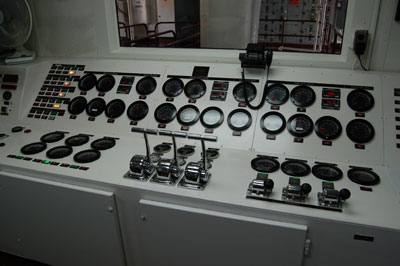 Control panel in the engine room

In Sunday's newspaper, I wrote about an unusual road near St. Mary, Missouri, that cuts through a hillside. I just received a call from a landowner along the road who explained that it is locally known as "Rozier's Hill Road."

From what I can gather, Jules Rene Rozier opened a store near this location in 1874, taking advantage of access to the river (before the river switched its course around Kaskaskia Island). The store must have been successful, because the business later expanded to include Rozier mercantile stores throughout Southeast Missouri.

I have a sneaking suspicion that Rozier's Hill Road (CR 950) was part of the original road between Perryville and St. Mary. Looking closely at the map, it's possible to draw a line between the two towns following county roads 950, 928, 926, 924, 914, and then Route V and Old St Marys Road within Perryville.

I was planning on blogging about the Ohio-Mississippi river confluence near Cairo, but Fred Lynch beat me to the punch. Watch his short video showing the panoramic view of three states from Fort Defiance State Park.

A couple months ago, I wrote about a road in Cape Girardeau County that travels along a gravel creek bed. Alas, the days are numbered for this unusual drive. The county hopes to work together with the National Guard to reconstruct this road away from the creek.