Wonder of the World? Almost.

Over the weekend, the results were announced for the "New 7 Wonders of the World." Among the winners, the biggest surprise was the Christ Redeemer statue in Rio de Janeiro, Brazil.

This religious monument, in the shape of a cross, sits atop a prominent hill and is visible for miles.

Hmmm... that sounds just like Bald Knob Cross in Southern Illinois. It, too, is a religious monument, in the shape of a cross, that sits atop a prominent hill and is visible for miles. 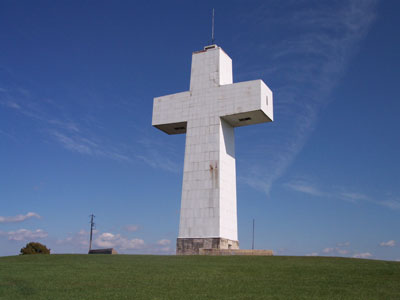 The difference, of course, is that the Brazilian statue overlooks Rio de Janeiro, one of the more cosmopolitan cities of the world, while Bald Knob Cross overlooks... well, Alto Pass.

Rio looks spectacular in postcards, and that's probably the biggest reason why the Christ Redeemer statue is now a so-called Wonder of the World.

But we should be proud to have our own Christian monument that is ever-so-slightly taller than a Wonder of the World.

The cross is perched on top of the 1,034-ft. tall Bald Knob, the second-highest point in Southern Illinois. Williams Hill in Pope County, at 1,064 feet, is the highest point in this part of the state. However, Bald Knob is much more impressive, while Williams Hill is just a ridge that has a bunch of communication towers growing from it.

From the top of Bald Knob, it's possible to catch a glimpse of the Mississippi River to the south. If you really squint your eyes, you can see the tops of the two towers of the Emerson Bridge (everything else in Cape Girardeau is blocked from view by other hills). 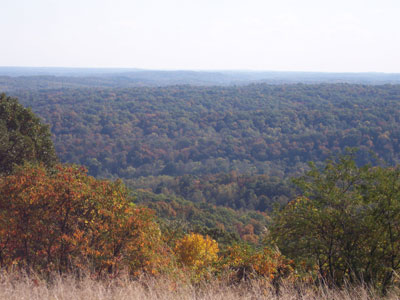 Looking across the Shawnee National Forest from Bald Knob

Unlike many of the places featured in this blog, Bald Knob Cross is easily reached with a well-marked paved road. Take Highways 146 and 127 to Alto Pass, and then follow the signs. The road snakes its way up the hill for a few miles before emerging suddenly in the clearing at the top.

The best place to see the cross from a distance is at the main overlook at Trail of Tears State Park. On a clear day (or night), it's also possible to see it from Highway 177 just east of Fruitland.