Drive across the historic metal bridges of Southeast Missouri

Southeast Missouri, however, does have a nice selection of historic metal truss bridges. These may not have the same charm as wooden covered spans, but they are no less historic or scenic.

Many of these bridges are still open to light traffic, but they are quickly succumbing to the wrecking ball to make way for modern, but often boring, replacements. Enjoy them while you can.

Wrought iron bridges are even more elusive than covered bridges, but we have one right here at the northern border of Cape Girardeau County. Painted bright red, this bridge is easily the centerpiece of Old Appleton. It was built in 1879 by H.W. Sebastian & Co. of St Louis. After the bridge was destroyed by a flash flood in 1982, it took an almost unprecedented effort over the following two decades to reassemble and restore the bridge to its rightful place. The results are fantastic.

Directions: Take US 61 from Cape Girardeau or Fruitland and drive north to Old Appleton. After crossing Apple Creek, make an immediate right and park near the bridge. You can't miss it. 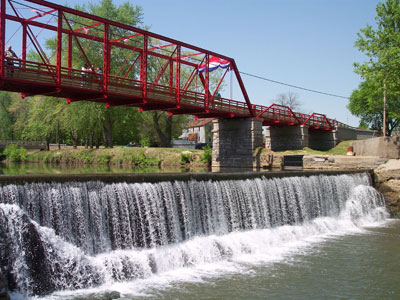 The town of Whitewater once had a bridge from the 1880s that probably resembled the Old Appleton Bridge. But it was replaced in 1954 by a newer steel bridge that itself has become historic. This bridge on Route A over Whitewater River features a sweeping curve along the top. After the 1950s, Missouri generally stopped building small truss bridges, so the Whitewater Bridge represents the last gasp for this kind of design.

Directions: Take Highways 25 or 74 to Dutchtown, and then head west on Route A past Whitewater until you reach the bridge. 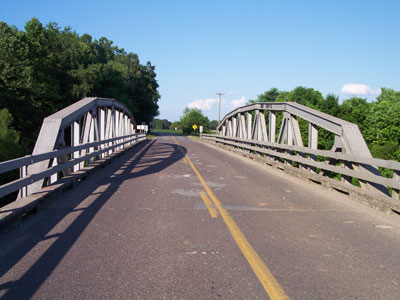 Recycling isn't a new concept: Metal truss bridges were designed so that they could be moved, allowing them to be reused in a new location. That happened at Sedgewickville when a new bridge was constructed on Route K, allowing the original bridge from 1913 to be relocated a few miles upstream along Whitewater River. The three-ton weight limit is barely enough to handle modern-day vehicles, but the bridge is still open, if you don't mind some rattling and shaking as you cross.

Directions: Take Highway 72 into Bollinger County, turn right on Route K, then left on Route EE at Sedgewickville. Continue on EE until you reach County Road 238, and then follow the gravel road to the bridge. 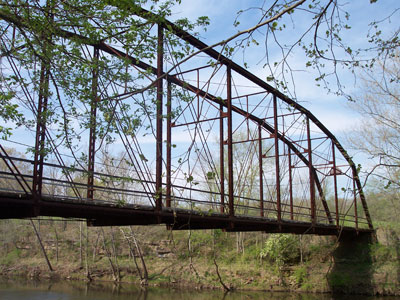 Just below the dam at Lake Wappapello, but unknown to most visitors, rests a massive steel truss bridge that was state-of-the-art when it was constructed in 1908. The complicated network of vertical, horizontal, and diagonal girders is hard to trace, but the design allowed this bridge to span 210 feet. It was constructed by Stupp Brothers of St. Louis, a company that still builds bridges today (among other things) under the same family ownership. Sadly, a similar bridge at Williamsville was replaced last year, and this bridge will soon share the same fate.

Directions: From the Wappapello Dam, take Route T east toward Puxico and then make a right turn on County Road 517. The bridge is a short distance to the south. 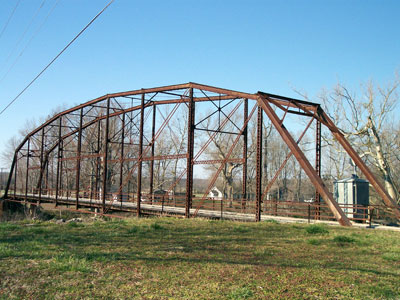 You won't find this very often: a narrow bridge with no guardrails. When it was constructed by the Frisco Railroad, this bridge over St. Francis River didn't need guardrails. It now carries light traffic on a county road, but still no railing. Stoddard County Road 499 southwest of Puxico features two other railroad bridges that have been retrofitted for cars, but the bridge at Indian Ford is the longest and most impressive. Just be careful with your steering wheel.

Directions: From the Wappapello Dam, take Route T east until the intersection with Route J. Make a sharp right turn on CR 499, which branches off just before Route J. This road is the former Frisco Railroad line and will take you to Indian Ford. 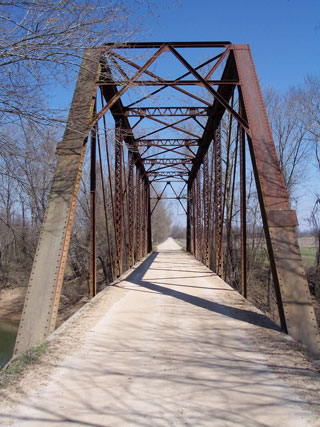 This bridge in Butler County is the only one listed on the National Register of Historic Places from Southeast Missouri. At one time Black River was considered a navigable waterway, so any bridges built across had to accommodate steamboats and other vessels. The solution was to build a bridge that could swing around a center pivot pier to make way for boats. That alone is unique for this part of the state, but the Hargrove Bridge features a rare truss design patented by Miller & Borcherding Bridge Builders of St. Louis, with only a handful of examples remaining anywhere. Restored in 1999, the bridge's pivot mechanism still exists, but no longer functions.

Directions: From Poplar Bluff, take Highway 53 southeast toward Qulin. At the intersection with Route HH, make a left turn onto CR 658. The bridge is just down this road. 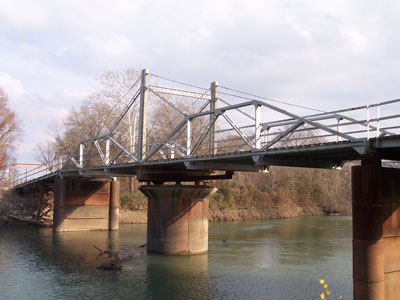 Not all metal bridges were built with fancy designs. Some used an idea borrowed from a piece of furniture in every home: the bed. Called bedstead trusses, these bridges have four vertical posts at the corners, just like bedposts. One such bedstead bridge is located on Perry County Road 930 over St. Laurent Creek, southeast of St. Mary.

Directions: Take US 61 north to St. Mary. Turn right on Route H and then make a right on CR 930. The bridge is a short distance down the road. 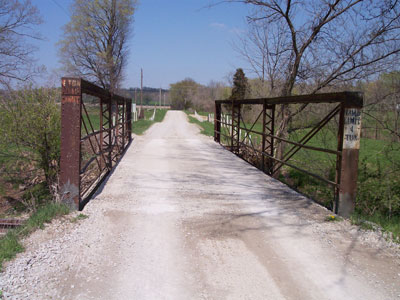 I've barely scratched the surface of the historic bridges to be found in Southeast Missouri, much less the rest of Missouri or Illinois. For more information, visit my website at bridgehunter.com.