Cape Girardeau residents spend an awful lot of time driving to St. Louis and back on Interstate 55. It's the same pavement, the same scenery, the same exits, and the same construction barrels every time, over and over.

Highway 61, however, provides a nice laid-back alternative when you have a little extra time and don't feel like dealing with yet another tailgater riding your bumper on the interstate.

In this post, I'll describe some of things to see along the old highway between the I-55 exits at Brewer (135) and south of Crystal City (170). These are conveninent interchanges for going to or from Highway 61 and make for a nice scenic detour while traveling to St. Louis.

From Brewer, take Highway 61 north for a mile to the junction with Route NN, and then turn left and continue for about 4 miles until you reach Perry County Road 840 on the left. A short distance down the hill on CR 840, you will see this on your right as you cross the bridge over South Fork Saline Creek: 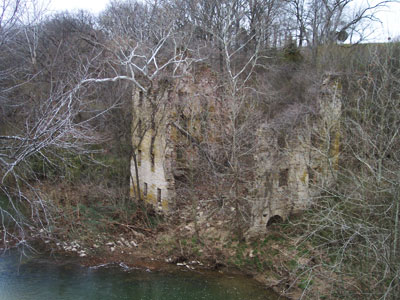 These are the ruins of the four-story Old Burnt Mill. This is a surprisingly large structure to find in a such a remote part of Perry County. The mill is on private property and the whole thing looks a little unstable (especially with the fallen trees), so it's best to stay on the bridge.

I'm not familiar with the history of the mill, but I do know that the old road between Ste. Genevieve and the lead mines at Mine La Motte forded the creek here. This road, called Three Notch Road, was the first road in Missouri, dating back to 1711. It's possible to follow some of the route using modern-day roads, but I'll save that for another blog.

Back on Highway 61, continue north to reach the town of St. Mary. Along the way, you'll pass through the area devastated by last year's deadly tornado. Closer to St. Mary, near the intersection with Route Z, keep your eyes peeled for large sinkholes on both sides of the road.

As you enter St. Mary, the speed limit drops to 35 mph at the bottom of the hill. I've heard stories about the notorious speed trap that operated here in the days before the interstate, as unsuspecting motorists didn't slow down fast enough going down the hill. 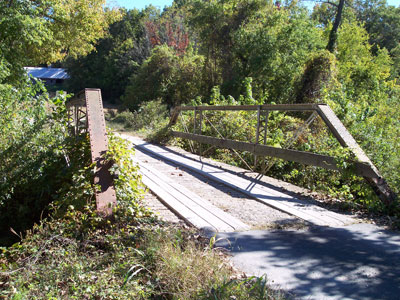 And then bear left at the next intersection on Perry County Road 950. After about a mile, the road climbs a steep hill in a very deep cut: 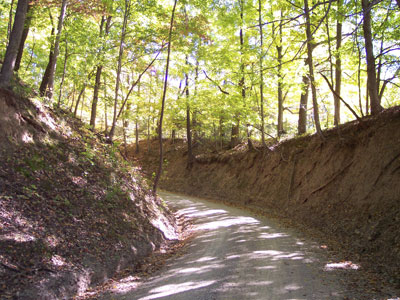 When I last visited, a tree had fallen over the road, forming a "natural arch." The banks on either side of the road are so tall that it was possible to drive under the tree without a second thought: 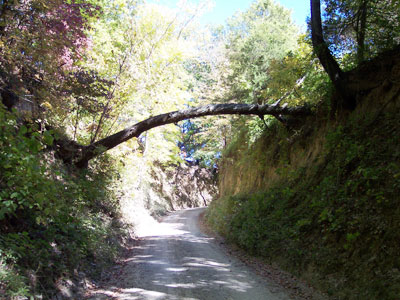 I've heard rumors that this road is haunted and while I don't put much credence in these stories, this is certainly a spooky place. Looking at the map, this road may have formed part of the original route between St. Mary and Perryville. Wagon and car traffic over the years has eroded the hill, creating the deep cut.

At the top of the hill, you can find a place to turn around, or you can continue to Route H and take that back to St. Mary.

Before the 1880s, St. Mary had a riverfront view of the Mississippi River. Those days ended when a flood caused the river to shift its course to the eastern side of Kaskaskia Island.

St. Mary still fronts the old slough of the river, which continues to mark the boundary between Missouri and Illinois. Route U provides access to Kaskaskia, a part of Randolph County, Illinois, completely cut off from the rest of the state.

The old town of Kaskaskia was the capitol of Illinois from 1809 to 1820, which seems rather ironic considering that Kaskaskia is now on the "wrong" side of the river.

North of St. Mary, Highway 61 crosses Saline Creek on a recently constructed bridge. On the left (west) side of the bridge sits this old stone bridge pier: 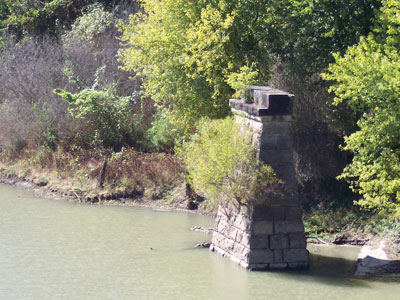 Farther upstream, but out of sight, was the location of the Saline Creek Salt Works. This salt spring played a critical role in the history of Ste. Genevieve, providing much needed salt to the early settlers. The actual site of the salt works is privately owned.

According to the tourist brochures, Ste. Genevieve features the "largest concentration of French Colonial architecture in North America." There's plenty of information available about Ste. Gen attractions, so I won't bore you with the details. But I do want to point out a lesser-known spot in town: 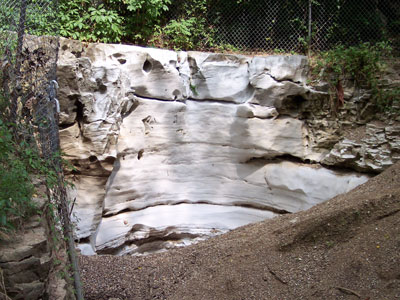 This is the Valle Spring, located next to Route M a few blocks south of the intersection with Highway 61. The spring wasn't running when I last visited, but it still features an interesting rock formation within a nice little park. Of course, the name comes from the Valle family, a group that seems to have been involved in almost every aspect of Ste. Genevieve's early history. 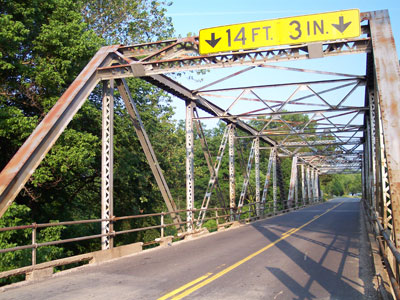 Many of the historic bridges along Highway 61 have been replaced. This bridge is scheduled for replacement in the next couple years; until then, it stands as the longest truss bridge on Highway 61 in Southeast Missouri.

Just north of Bloomsdale, a vintage roadside park features a scenic overlook above the interstate and a large valley (best viewed in winter, though). A few more miles north, Highway 61 passes the entrance to Holcim's Ste. Genevieve plant, destined to be one of the world's largest cement plants.

Highway 61 eventually meets the interstate near the town of Selma at Exit 170. From here the scenery quickly gives way to the sprawl at Crystal City and beyond, so this is a good stopping place for this blog. Enjoy!