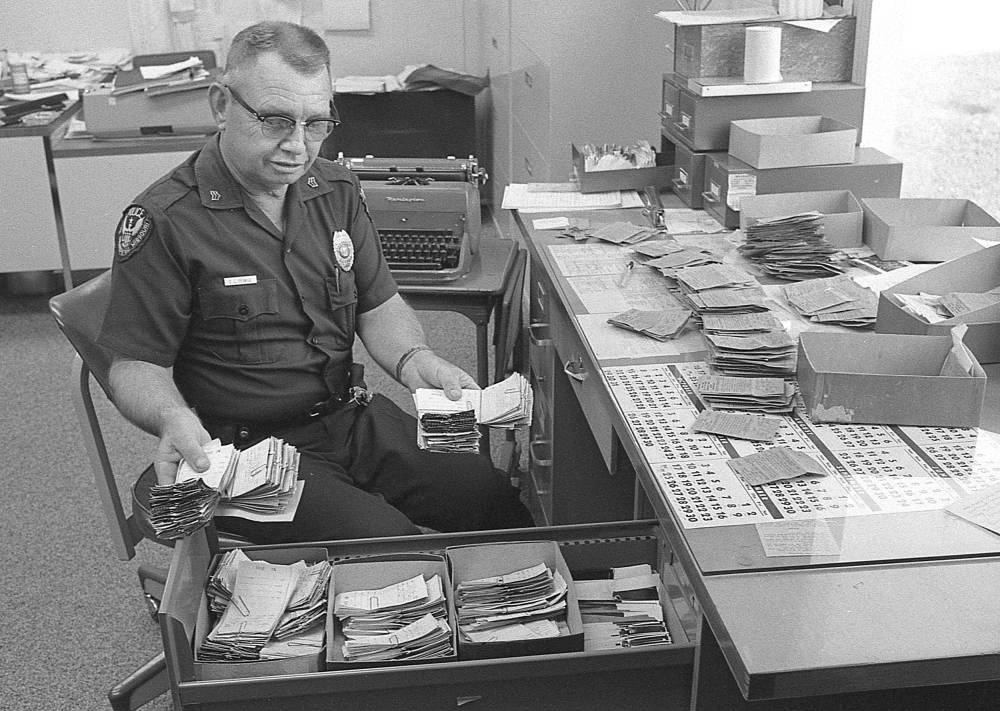 Those little red tickets motorists often find on their windshields after parking meters expire are a sizable source of income for the city. Here, Dennis Penrod of the Cape Girardeau Police Department sorts through piles of tickets which haven't been paid. It's his job to process the tickets. (Fred Lynch photo)

Nickels and dimes add up in city parking revenues

You've just walked out of your last stop on the shopping list. You're exhausted. You've fed parking meters all day, but this last stop was only going to take a second....

And then you see it--one of those little red envelopes that have decorated the windshields of hundreds of automobiles in Cape Girardeau.

What few motorists, or parkers anyway, realize is that those little red envelopes provide quite an income for the city.

According to Dennis Penrod of the Cape Girardeau Police Department, more than 100 tickets are issued in an average work day. Meters are read from 9 a.m. to 5 p.m.

And work days for the city's meter men are every day except Sunday and holidays. When it rains there are fewer tickets issued. Mr. Penrod, who processes the tickets as they pile up, noted at that rate there are more than 250,000 parking tickets issued each year.

At 50 cents each that means that parkers are contributing $125,000 each year through forgetting to put that penny, nickel or dime into the slot before leaving their cars.

Mr. Penrod noted, however, that many times the tickets aren't paid. He opened a file drawer revealing piles of the tickets which haven't been paid. After three days, though, the tickets no longer carry the small 50 cent charge--they become $2 hassles.

"If you acquire more than two 50 cent tickets," he said, "then a note is sent to you informing you that there is now a $2 charge for one ticket."

At that point some parkers choose to continue ignoring their fine. And that's when the penny which could have been put in the meter to begin with becomes a fine of some quantity.

"We've issued warrants for these parking tickets before," said Mrs. Helen Sterling, Municipal Court clerk. Mrs. Sterling recalled one incident in which a man had 85 parking tickets which then became $2 apiece tickets. He was then issued a warrant to appear in Municipal Court. At that point the man could have been charged up to $7 for each ticket. "That would have really been some kind of fine," said Mr. Penrod.

The tickets don't have names attached to them to begin with. Unknowing motorists may think the ticket is simply a request for 50 cents. But the ticket has a carbon copy which bears the car's license number. Mr. Penrod then runs the license numbers through the computer to identify the owners of the car who then receive notices of their $2 ticket fines.

Mr. Penrod noted there are license numbers that become just as familiar as the names. But these people usually pay their fines immediately and their names are never known.

Ticket, but no name

"They keep their tickets paid so we never know their names," said Mr. Penrod. "But there is one license number that I get all of the time and am never surprised to see it. But the guy keeps his tickets paid so I haven't ever had to go to the computer to find out what his name is."

Many people feel that parking should be free. Mr. Penrod noted, however, that 50 cents really isn't much for a parking ticket. "In Chicago I believe the tickets are $3 and I know they go all the way up to $5 in some cities. So this is really a very minimum charge."

There are several things that prompt people to stalk into police headquarters hopping mad about a 50 cent parking ticket. Mr. Penrod and Mrs. Sterling said that they have received angry notes and letters from parkers who "just know" that they are innocent of that 50 cent violation.

"Some people come in here knowing they are innocent," said Mr. Penrod. "But they thought they were doing right by putting the money in the meter at the rear of their car instead of the correct one at the front of their car."

Mr. Penrod said that there has also been some confusion for people parking at SEMO State University. "They are using the same color of parking tickets for their meters as we use, but that money goes to the university. We get some of their tickets and they get some of ours so we just trade," he explained.

Mr. Penrod has been with the police department here for 13 years. The father of six daughters and a son, he has held almost every job possible as a policeman in Cape Girardeau.

At the present time he not only issues notices to delinquent parking fine payers, but he also is on the security detail for the incoming and outgoing commercial flights at the Cape Municipal Airport.

But the meter fines--well, they keep Mr. Penrod pretty busy. "We just never quite get caught up. But it has to be done so that everyone gets to park in Cape."

His hints to those who receive an abundance of parking tickets: "Either pay the meters, or the way some of these people get tickets, I'd pay for a private parking space in a lot somewhere!"

Parking meters ordered out of Cape