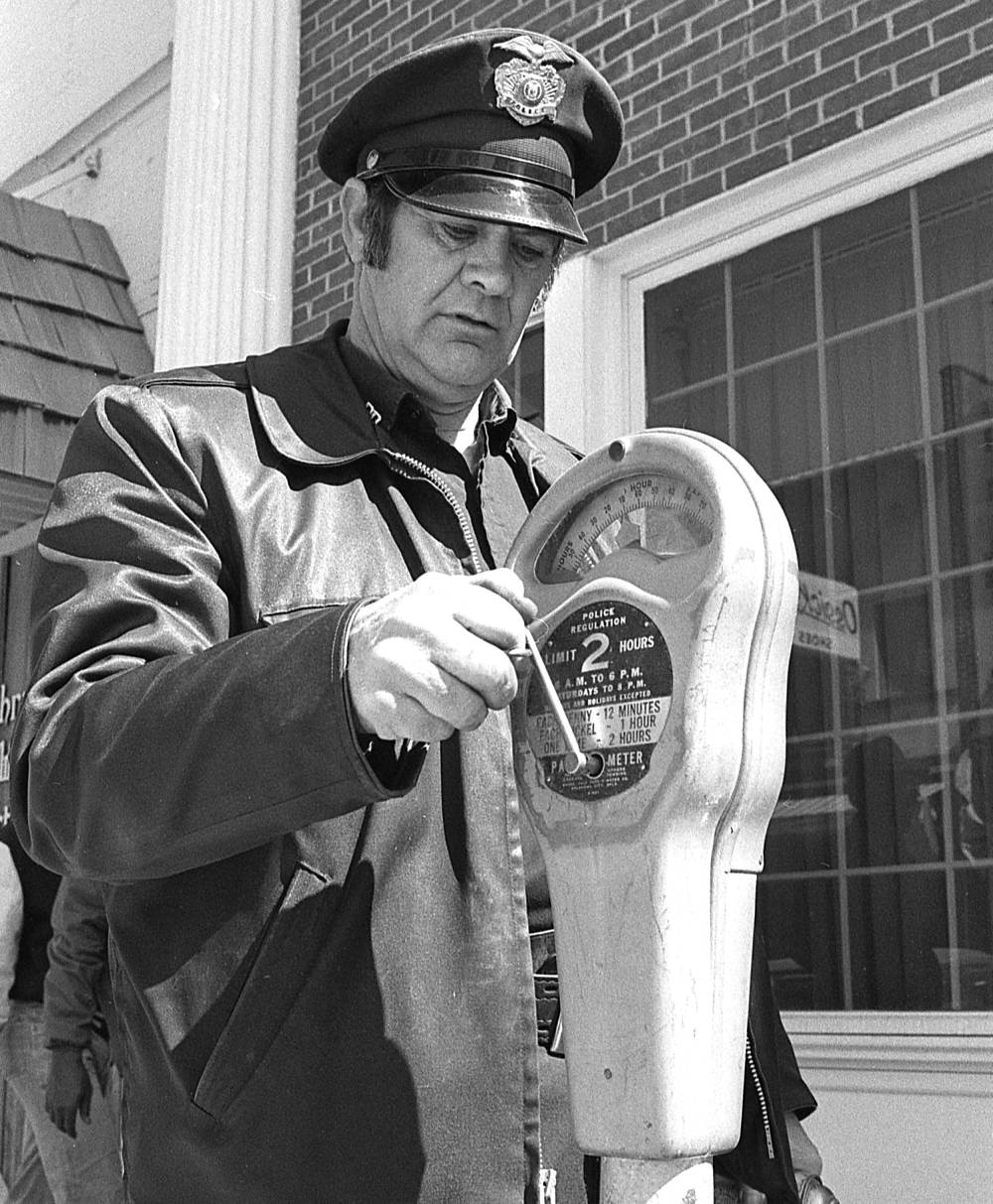 Cape Girardeau Police Ptlm. Norval M. Friese winds one of the 750 parking meters located in several business areas of the city. Although nearly 30 years have passed since Cape Girardeau installed parking meters, the officer who tends them and the meters themselves are still targets of complaints. (Fred Lynch photo)

Some drivers see red if 'expired' pops up

Ptlm. Norval M. Friese made a telling remark when comparing his past experiences running radar for speeders to his job now tending the city's parking meters.

"People wouldn't get as mad getting that speeding ticket as they do about a parking meter ticket," Ptlm. Friese said, somewhat puzzled. "I think they just don't like to pay for parking."

This summer will mark the 30th anniversary of the end of free parking on streets in three of the city's business districts.

But time apparently has not erased what can only be called a reflexive loathing of the parking meter. Nor has it altered the primordial fear felt toward the officers whose task it is to watch for the red "expired" flag to spring up.

Many might feel the not-so-affectionately nicknamed one-arm bandits are out to nickel and dime them to death. But in looking for a target for their meter madness, the outraged often turn upon the meter itself, or on the officer who has just tucked one tiny red envelope under the windshield of a car.

In the two years Ptlm. Friese has worked the parking meters, he has become a familiar face downtown. As he talked about the job in an interview Friday at a Main Street restaurant, one customer who came in tapped him on the shoulder, exclaiming, "Why, I just wasted a nickel."

On an average day, Ptlm. Friese will issue 100 parking meter tickets during four or more rounds of the 750 meters in the city.

Also on an average day, Ptlm. Friese will receive about two complaints through a call to the police station or a message sent in with one of the red envelopes.

And five or six times a day, he is likely to have a discussion with a motorist whose vehicle is parked at an expired or faulty meter.

"I just had one today. The meter had a hairpin stuck in it," Ptlm. Friese said. "I just came around the corner and a man said the meter wasn't working."

Many ticketed drivers who have parked at an intentionally or accidentally stuck meter will hail him, he said. "And if the meter didn't work, I write void on the ticket for them."

One often-voiced complaint heard at the scene of the expired meter is that the driver had just gone to get change or is going to get change, he said.

"If they said they were getting change, I will write 'void' on the ticket and tear it up," Ptlm. Friese said.

But on the city's older model, automatic meters, drivers sometimes are caught in a lie. They maintain they just put a dime in, but those tho try that excuse usually don't realize a small window in the meter shows the coin that has just been inserted.

The most common refrain is, simply, "I forgot to put money in the meter," he said. "They'll say, 'Do you have to write the ticket?' and I'll say, 'Yes, I already have it started.'"

When such a conversation takes place, the driver will often accept his or her fate. "They ask me how much it is, and I tell them 50 cents," Ptlm. Friese said. "They say, 'It's my fault. I didn't put enough money in the meter.' They pay it and go off."

But there are those who, possessed by meter madness, will not let the issue rest. Some, in silent protest, take the ticket and throw it in the street, Ptlm. Friese said.

Others will turn on the officer, who not unused to a "cussing out," has been called names that cannot be printed.

One day recently, when the sidewalks were still slick with ice, a woman whose car he had ticketed on Broadway called to him from a distance," he said.

"She said, 'Are you going to give me a ticket?' I was only in the store 10 or 15 minutes,'" he recalled. When he said the ticket would not be changed, she became angry and told him, "The next time you start to give a ticket, I hope you slip on the ice and fall on your pencil," he said.

"And about one person out of five will ask you, 'Aren't you ashamed of yourself for giving somebody a ticket like that?'" he said.

"The harassment kind of gets on you every day, but there isn't a thing you can do about it," Ptlm. Friese reflected. "I just tell them it's my job."

It is a job, also, that the officer emphasized he likes, because it has rewarding moments as well.

One day last month he was near a downtown market when he saw a car in a lot strike a parked car and leave. "I started running after it and got the license number. Then I went inside and told them."

Because of his efforts, the store owner sent a letter of appreciation to the officer. The struck car belonged to a customer.

Ptlm. Friese also maintains and repairs damaged meters at an average of 20 a day. Some have been jammed accidentally by a slightly bent coin. Others have been jammed with bent coins, soda can tabs or paper clips, intentionally.

"You'll find that many need repair out in the street today," he said. Many have been purposely vandalized.

Ptlm. Friese hoped parking meter users would realize the meters are designed to keep traffic moving, not as a source of revenue for the city.

Police Chief Henry C. Gerecke echoed that idea. "We don't make enough money off the meters to pay for the meter men.

"What a parking meter is designed for is to keep the flow of traffic moving," Ptlm. Friese said. "So customers have a place to park."

He noted that one of the seemingly most infuriating situations he runs across is the driver of the car who feeds a meter all day and is ticketed when he or she has forgotten two hours have passed.

"That's when they really get mad," he said.

But those who feed one meter all day should be aware that an overtime parking ticket, with a $6 fine, can be issued to a car parked at a meter for more than two hours, even if the meter has been fed another nickel or dime.

"We could mark the tires. If you are there over two hours, regardless of whether you are feeding the meter, you can be given an overtime parking summons," Ptlm. Friese said.

Several Main Street merchants, he noted, have complained about cars parked all day on Main with the meters being steadily fed.

But the city, rather than impose the stiffer penalties of overtime parking, continues to issue the 50-cent tickets at expired meters.

And parked vehicles are given a daily half hour courtesy reprieve in the morning. Ptlm. Friese checks and winds the meters from 7 to 9 each morning, when the official beginning of the meter period begins.

"I usually give them a half hour's grace," the officer said. "A lot of people might go to work and park on the street, unlock their office and check their stores and then park in a parking lot," he said.