Parking meters ordered out of Cape 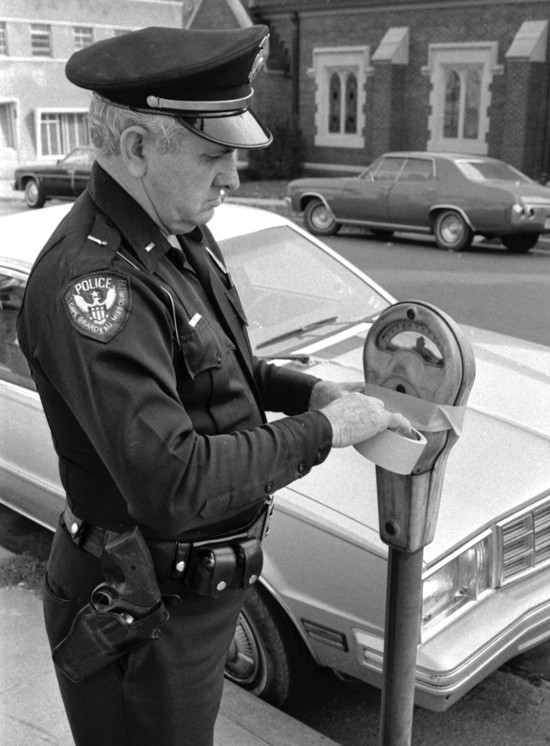 "Feeding the meter" is a thing of the past in Cape Girardeau.

The City Council unanimously voted at Wednesday night's council meeting to discontinue the use of parking meters throughout the city following a request from the Cape Girardeau Metro Association that meters be removed from the downtown area.

By 9 a.m. today police were putting tape over the coin slots on the city's 300 remaining parking meters and were preparing to remove the meter heads from the posts.

President of the Metro Association, Richard M. Sher, appeared before the council to request the removal of the meters along Main, Spanish and Water streets and the eastern end of Broadway near the downtown shopping district.

"They're (the parking meters) frustrating the merchants and frustrating the customers," Sher said. "And with the West End (shopping areas) going in I think we need all the help we can get."

Councilman Robert K. Herbst, himself a downtown merchant, said that downtown businessmen have been discussing the future of parking meters in the Main street area for several years.

"We've had an ongoing discussion about the necessity of meters both pro and con for the past five years," Herbst said.

The purpose of parking meters is to create a constant turnover of available parking spaces, but merchants in the downtown complained that customers often cut shopping short because their time expired on their parking meters.

"We would like the meters out for the convenience of shoppers in our Main street area," Sher said. In place of the meters, it is proposed that signs be erected in the downtown area to indicate that the parking spaces were reserved for customers and should be used for no longer than two hours.

However, Councilman Howard C. Tooke observed that most of the city's remaining parking meters were included in Sher's removal request and that there wouldn't be much sense to retaining other meters in the city, primarily located along Good Hope and on several side streets.

Tooke added that he saw no need for the six-month trial period suggested by the Metro Association.

"We've had enough experience with parking meters that we don't really need six months for a trial period," the councilman said. "The meters are getting old and if they are replaced at a later date they would be replaced with new ones at a higher cost."

Tooke made the motion to remove all the meters in the city, with the exception of a handful of meters used by SEMO State University on the campus.

He also recommended that the police department reassign the two officers who have been in charge of writing tickets for parking violations.

The removal of the meters marks the end of an era here that began in 1948 with 425 parking meters were installed along Broadway, Main street and Good Hope shopping areas.

The number of meters in the city continued to grow until the early 1970s when there were approximately 950 such devices here.

In 1957-58 parking meter citations here hit their peak when receipts totaled $40,595.20. However, the meters rarely tended to be profitable. The receipts from parking meters were used for salaries of the officers who wrote parking tickets and for maintenance and replacement of meters.