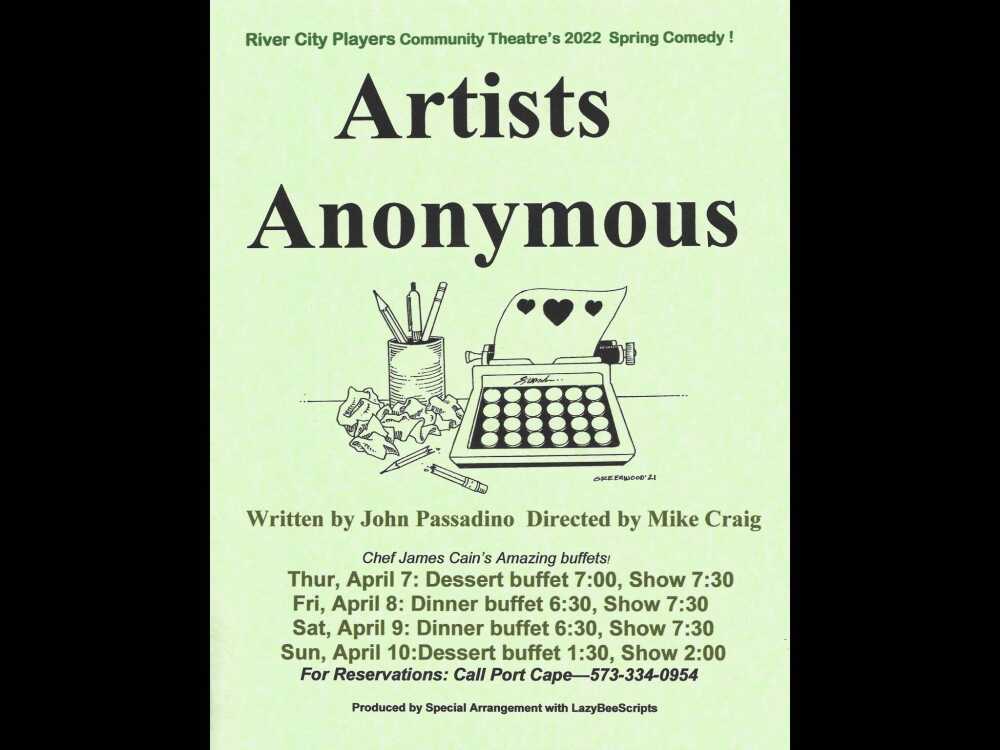 Check dates and time on flyer

River City Players opening production is near! “Artists Anonymous “ by John Passadino and directed by Mike Craig will open on Thursday, April 7. This season opener is an one hour comedy about three writers that just can’t get that big break! They meet once a week to discuss old ideas, new ideas and some bad ideas. Chrissie Roche is playing Leah the female leader of the group! Justin Aden is playing Ralph who has other problems besides not being able to write that perfect script. Add their best friend Jack played by Bryan Parker to the mix and you have a threesome that you won’t forget. You have 4 dates to choose from and two types of buffets! April 7, opening night is the dessert buffet followed by the show, with April 8 and April 9 being the full deal buffet including dessert and the show . April 10 is the Sunday Matinee dessert buffet and show. The cost is $20 for the dessert shows and $35 for the dinner shows. Make your reservations by calling Port Cape at 573-334-0954 and reserve that table now. The Saturday, April 9 dinner show is sold out so call now to reeves your table for the remaining three shows. Don’t wait as these shows are selling quickly. Come out and support your Community Theatre and have an evening or afternoon of fun, laughter, and delicious food. As always I will see you at the Theatre! ❤️🎭

All performances are in the Yacht Club at Port Cape