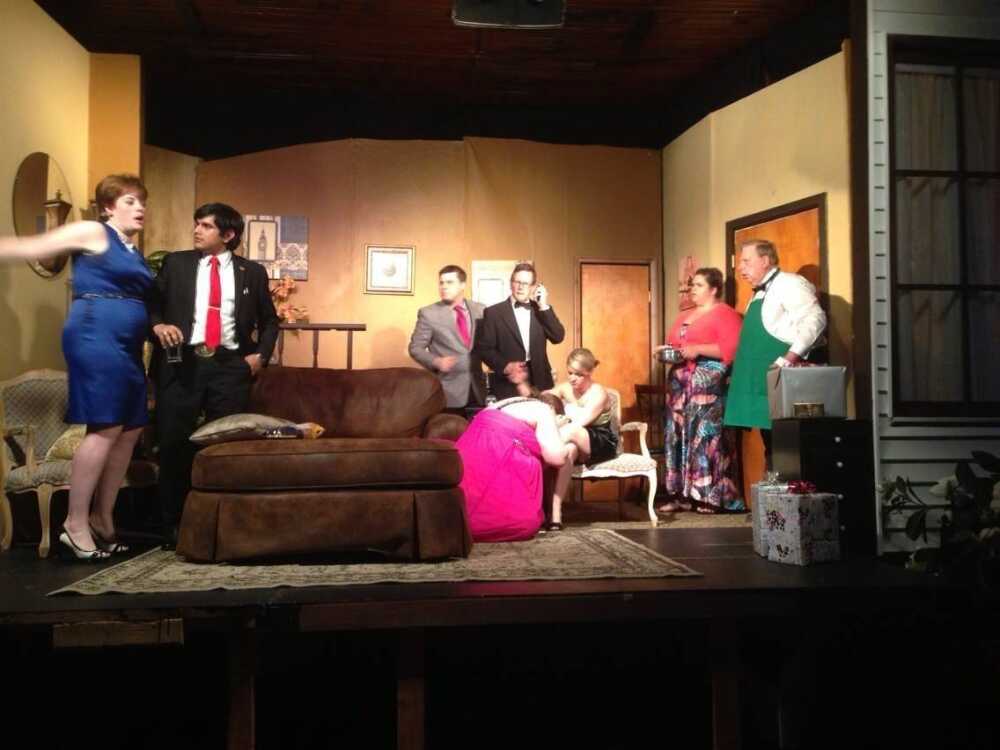 River City Players production of "Rumors" has reminded me of the children's story of the little engine that could. The occurrences began way back with auditions when not enough people auditioned to fill the roles of the ten characters in this play. Director Andrea Shovan did some recasting of the characters and brought in her teenage kids to play the two small roles of the police officers. The show was now fully cast. Fast forward several weeks into rehearsals and one of the male leads accepted a job in Atlanta and we lost him. Jump forward a few more days and one of our leading ladies fell and broke her shoulder. Eleven days before the show was to open Andrea called on Michael Toeinsketter to come in and play the role of Glenn Cooper. With Michaels help a phone call was made to Ally Boyland to take over the role of Chris Gorman. Can you hear it? I think I can, I think I can. Rehearsing with ten people can be very difficult to get them all together at one time and in one place. Jobs, family, illness, previous obligations, well you get the idea. Opening night came and went with a job WELL done by the cast. Everything was going great and the productions began with a BANG! Fast forward just one day and late in the afternoon on Friday another occurrence happened that took the character playing Cookie Cusack out. After talking with the director it was decided the show must go on. Roll forward to Friday nights dinner show. The director, Andrea, put together a costume, did her hair, applied make up and took to the stage to play the role of Cookie. I do believe I heard her say under her breath I think I can, I think I can. The little engine that could got on that stage and the second performance was a go. The audience knew that she had stepped in to make sure the show happened. RCP has the best audiences anywhere and are so supportive of us. Tonight is closing night and it would be wonderful if you and your friends would come and support your community theatre. Reservations can be made to this Neil Simon play "Rumors" by calling Port Cape @334-0954. Doors open at 6:30, dinner at 7:00 and show at 8:00. As always I will see you at the theatre!