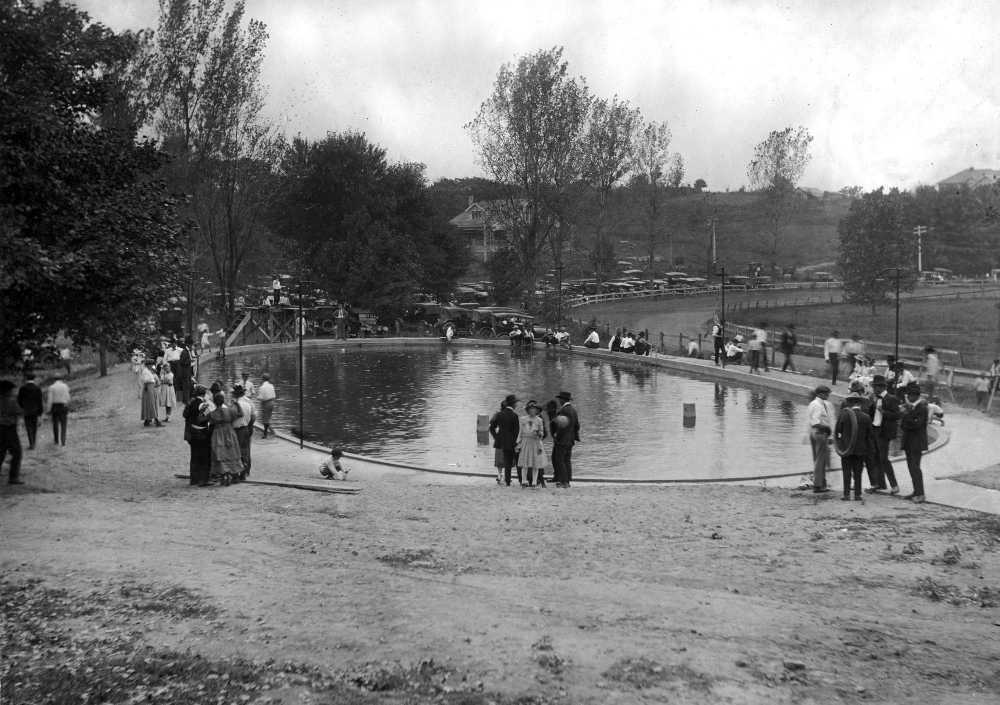 This picture was taken on July 4, 1919 when the oval swimming pool at Fairground Park was formally opened to use after ceremonies were held. Adequate for its day, it was the first city pool in southeast Missouri. Note the attire of the day as demonstrated by the men and women gathered at the pool before the ceremony. The park was later named Capaha Park.

Cape Girardeau's municipal pool was opened with hurrahs and shouts of joy on July Fourth. Mayor H.H. Haas made a speech telling of the generosity of the Civic Improvement Association and the Home Guard and then said let's give three cheers for the ladies. The trees fairly shook from the noise. "Let's give three for the Home Guard," the mayor said, and again 300 men, women and children yelled.

"The man who actually did the work needs encouragement. Louis Wittmor has worked here day and night for several weeks to make this pool possible and too much credit cannot be given him," the mayor said. "Now let's give the commissioner a shout of approval," and the noise broke out again with renewed vigor. It was a fitting approval of a mighty lot of good work on the part of Wittmor, and before cold weather comes he will be praised time and again by the hundreds who will get much enjoyment from a dip into the cooling water.

When the mayor completed his talk, in which he asked those present to cooperate in making the pool a success by obeying the rules and doing everything to make things pleasant from all angles, he was the first adult to demonstrate that the water is deep enough for diving.

Some of the kids might have remarked that the mayor made considerable noise when he hit the water, but just the same he went out of sight and was several yards distant when he came in sight again. No sooner had he plunged in than dozens of others followed.

It was intended to have the formal opening of the pool at 3 o'clock and no one was expected to get in before that time, but the day was hot and as about 200 kids had on their suits and were ready they simply could not resist the temptation and about 1:30 they piled in. When he got ready to make his talk the mayor called all the boys to the north end of the pool and after being pleasant and complimentary he would up by impressing on them that it would be necessary to comply with the commands of the attendants and to see that the rules to be formed later for the operation of the pool are upheld by all.

Within an hour after this ceremony two kids engaged in a Willard-Dempsey contest. It seems that one had kicked the other in the face with his bare foot and then the fur flew. The mayor sent both lads home and told them not to enter the park again that day. He also warned that any boys or adults who violate the rules will be sent home. The second offense will likely create a vacancy in a bathing suit for the balance of the season.

The mayor says there were about 250 men and boys and about 75 women and girls in the pool during the afternoon and early evening. It was necessary to close the pool at 8 o'clock because the lights have not been installed. Electricians are today putting up the lights and they will be ready for tonight, or at least tomorrow night.

The pool for the present will be open for bathers from 2 to 6 o'clock and from 7 to 9 or 10 each day, the mayors says. Regulations for the permanent operation of the pool have not been made and it will be several days before the officials will know how the place should be regulated.

The regular attendants have not been employed. Martin Oberheide was in charge of the men's dressing room yesterday and will probably be kept on the job. Mrs. Gramling and Mrs. Pott, representing the Civic Improvement Association, were in charge of the women's room. A woman for this work will soon be employed.

When asked it women will be admitted at all times, the same as men, Mayor Haas said he was not able to say. He said it will be necessary to have rules covering such points and these problems will be worked out later. There will perhaps be afternoons or evenings when only women will be admitted, and the same with men and boys. Then there may be times when all are admitted at one time. Perhaps there will be mornings when only women and children will be admitted to the park, so timid ones may enjoy the pool without facing the stare of men and boys. These things will be announced soon.

Mayor Haas was asked if it would be necessary for women to wear stockings with their bathing suits. "I see that St. Louis makes such a requirement," the mayor remarked, "and I suppose all ladies will wear long stockings. We have made not definite rules regarding dress and are hoping that it will not be necessary. I naturally assume that all ladies will wear long stockings. Little girls will not need them. We are hoping that every man and woman who uses the pool will strive to set a good example for the children."

All adults were charged 25 cents and about 65 paid yesterday. All children under 16 will be admitted free during the afternoons but all must pay in the evenings. The city will furnish a towel and cake of soap to each bather. The attendant in charge of the dressing rooms will check the clothing and take good care of it. The shower baths will be provided. The towels must be laundered, the place must be kept scrupulously clean, the pool must be emptied and scrubbed with a cleansing compound several times a week, the attendants must be paid and there will be great expense. The charge of 25 cents for adults will barely pay for the soap, towels and attendants. The city will furnish the water and guarantee any deficits, so under such circumstances the charge of 25 cents is reasonable.

Cape Girardeau's swimming pool is considerably larger than the average. When completed it will be the equal of most any and the indications are that it will prove a popular success.

The swimming pool project was several years in the making. It was finally accomplished with contributions of $2500 from the Civic Improvement Association and the Home Guard, and $1092.02 from the city, to meet the $3592.02 cost of the pool.

No one was permitted to enter the pool without first going through the dressing room and getting under the shower.

According to a story in the July 10, 1919 Southeast Missourian, the swimming pool would be closed on Friday in order that the pool may be cleaned and fresh water run into it. It would open Saturday morning from 9 to 12 o'clock for women only, for those women who could not go in the afternoon or at night.

"Some people have said that they hesitated to go into the pool because they fear that the water is unsanitary. The city officials give assurance that there need be no fear on this account. Antiseptic powders are put into the water, they say, and besides this, there is a 2-inch pipe running fresh water into the pool at all times and a 2-inch pipe letting water out at all times. This keeps the water in good condition."

The photo is looking to the southwest. The two concrete blocks in the pool mark the edge of the shallow end of the pool. The deeper end is to the south where diving boards would be added later. The race track is to the west of the pool.

Here are links to previous blogs about the city swimming pools: