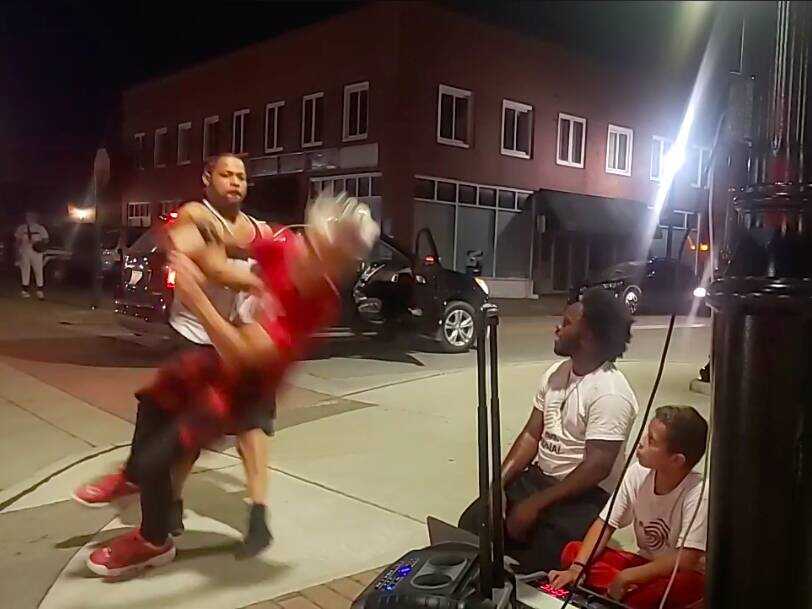 This image taken from video shows an attack on a 12-year-old boy in downtown Cape Girardeau late Friday night.

Officers have checked multiple locations to no avail. He said family members of the suspect have been uncooperative and refused to allow officers to search for the suspect. Police are actively searching for the suspect.

According to a vetted source, the Cape Girardeau Police Department has identified the alleged assailant, who is currently on probation for felony domestic assault. The man had not been located as of early Sunday afternoon.

The incident, where the assailant punched a 12-year old boy who was part of a public dance gathering with Fingerprint Urban Dance Studio, has gained national attention. It was originally broadcast on Facebook Live, shared tens of thousands of times, then picked up by celebrity news website TMZ and others.

According to Michael Crank Curry, owner of Fingerprint, the 12-year old suffered a concussion and injury to his nose. “He is resting at home today, and was still getting dizzy as of this morning,” Curry said.

Curry explained that his studio has been holding street dances without incident during the Spring and Summer for more than two years.

“It’s a chance to showcase what we’re doing in a positive light, while giving kids a chance to perform and make some revenue off their passion,” Curry said. “Monetizing our craft is part of what we learn. Artists don’t always think about that.”

Curry nor any of the dancers know the assailant.

“I really thank the community for their support,” Curry said. “I especially appreciate the people at Shaker’s Bar (across the street) for their quick response. The bouncers were really quick about being proactive in helping. I had the video, but I didn’t know who he was. They put information out there quickly to get him identified.”

For the time being, though, the suspect, identified as Cedric Moore, remains at large. Individuals with any information are encouraged to contact the Cape Girardeau Police Department at (573) 335-6621.

THIS STORY WILL BE UPDATED as more information comes in.

Police are investigating an attack on a 12-year-old male Friday night in downtown Cape Girardeau.

Cape Girardeau police Sgt. Joey Hann said at approximately 11:40 p.m., the juvenile was dancing on Main Street near Independence Street when a dark sports utility vehicle stopped in the westbound lane of Independence Street. An adult male passenger exited the vehicle and hit the juvenile in the head from behind. The suspect returned to the vehicle and quickly drove away.

The victim was transported to a local hospital with a wound to the head and is currently recovering.

Hann said the attack was unprovoked and the juvenile said he did not know the suspect.

Police are currently working to locate the suspect, Hann said. Individuals with any information are encouraged to contact the Cape Girardeau Police Department at (573) 335-6621.

View 30 comments
Community discussion is important, and we encourage you to participate as a reader and commenter. Click here to see our Guidelines. We also encourage registered users to let us know if they see something inappropriate on our site. You can do that by clicking "Report Comment" below. Our goal is to create a place for robust and civil discourse about our community, state and nation.
More to explore