As I do research in the files of the Southeast Missourian and Bulletin Journal newspapers, I'm often surprised to find projects that were proposed, but were never carried out.

A good example of this was a 1960 plan by the Cape County Historical Society to develop a Mississippi River overlook at the site of the former Fort A, at the east end of Bellevue Street. 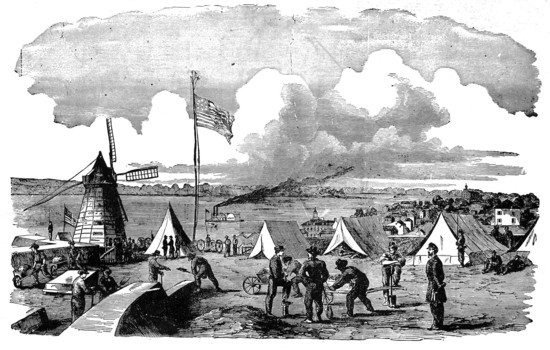 (A drawing of Civil War Fort A from the book "Our Soldier in the Civil War.")

During the Civil War, four forts were constructed at Cape Girardeau to protect the town from Southern forces. Of these fortifications, only one -- Fort D -- survives in a form similar to its original.

Fort D is located on a bluff above the river, surrounded by Fort, West Fort, Elm and Giboney streets. It owes its existence to the historic preservation-minded Giboney-Houck family, which owned the land before and after the war and sold it to the local American Legion Post in 1936 for $1,000.

Using plans supplied by the War Department, the Legion and the Works Progress Administration restored the fort -- reforming the earthworks, digging the moats and re-establishing the gun emplacements. An addition to the site was the stone structure that stands at its center. The stones used in the "powder house's" construction came from the former Cape Girardeau Northern Railroad depot at Jackson and were given to the Legion by the Missouri Pacific Railroad.

Fort D continues to be used to illustrate Civil War times in Cape Girardeau by a devoted group of volunteers and the city parks department.

Unfortunately, the same can't be said for the other Cape Girardeau forts. The area that was Fort B is on the campus of Southeast Missouri State University; Fort C is now the Fort Hope housing development. I can find nothing in Missourian files that suggests either site was a candidate for preservation.

That's not the case of Fort A, however.

Several attempts were made over the years to preserve the site, which by the early 1900s had become an overgrown haven for wildlife. A 1922 story reports 12-year old Wilson Gibbs chased a rabbit into a a cave at the site. While the rabbit made its escape, Gibbs did stumble upon two jugs of moonshine. A law-abiding youth, Gibbs turned the illegal liquor in to Justice of the Peace C.M. Gilbert. There's no mention of whether anyone claimed the whiskey.

In March 1935 more damage was reported at old Fort A, caused by torrential rains. According to the Missourian article: "Historic Fort A, overlooking North Main Street and the Mississippi River, was threatened seriously today because of a slide from the east incline caused by the excessive rain. Tons of dirt and stone from various points all the way from the base to the top of the incline slipped into the street Sunday night. The sidewalk area at the west side of (Main) street was clogged, the debris sliding past the middle of the street...Some of the dirt came from the top of the fort area, but most of it was from the slope..."

Almost five years later, in December 1940, the Cape County Historical Society made an appeal to the Cape Girardeau City Council to preserve Fort A. The society suggested the construction of "a small fort, similar in design to that which was on the spot, with the ground to be cleaned up and put to grade." Arthur W. Harrison, owner of the property, even agreed to deed ground to the city for use in the project. A tract measuring about 155 by 215 feet on the north side of Bellevue and another plot 101 by 215 feet on the south side of the street would be used.

While the society pledged its aid to the project, it was hoped the WPA would provide the needed labor, as it had done for the Fort D project.

By March 1941, a tentative sketch had been made by city engineer John Walther. But the fort restoration had evolved into a "paved turnaround... with walls, terraces, masonry and steps... arranged at the sides of the central unit in the old fort site." Gone from the plan was the "small fort, similar in design" to the original fortress.

A major stumbling block to the project was how to raise the estimated $1,800 needed for the materials.

Apparently, nothing more came of the project. Perhaps the trials of a new war -- World War II -- halted the plans. 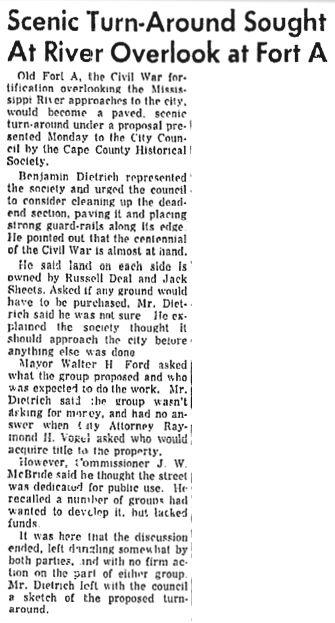 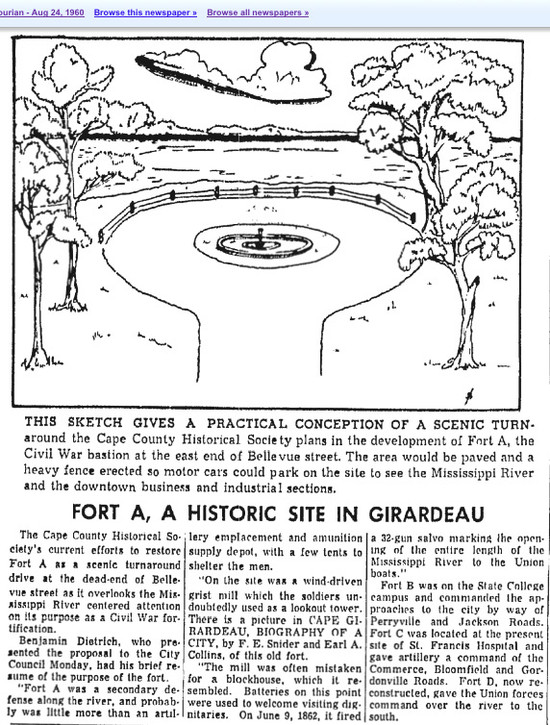 Obviously, the plans were never carried out, as houses line both sides of Bellevue in that block, and the street still ends in an overgrown wilderness.