Fr. Murtaugh: 'A friend upon whom we could rely'

A recent visit by a Cape Girardeau reader reminded me of the legacy of the Rev. James A. Murtaugh, C.M., a Catholic priest who served the Vincentian parish and schools here, as well as this town's public schools.

During a time when  civic-minded Girardeans stood up to advocate the construction of a high school here, Murtaugh's was one of the strongest voices calling for the passage of a bond issue to build the facility which became Cape Central High (later Schultz) School.

On Oct. 14, 1913, a mass meeting of local residents was held to discuss the proposed new school. Showing the regard with which he was held, Murtaugh was chosen to chair the meeting.

After hearing speeches by the school superintendent, the president of the Normal School (now Southeast Missouri State University), and school board members past and present, Murtaugh spoke of the public's moral duty to build new schools that would allow children to learn in the proper environment, so they would become "healthy, useful members of society."

Murtaugh was born Jan. 7, 1860, in La Salle, Ill., the son of well to do farmer Bernard Murtaugh and Catherine Conaty Murtaugh, both Irish immigrants. He was graduated from Niagara University at Germantown, Penn., specializing in language and biblical studies.

For a time he taught, going to St. Louis after Kenrick Seminary was established in the late 1890s. There he was professor of Hebrew, Greek and Latin.

After that, he traveled the country as a missionary, his oratorical gifts serving him well.

An editorial in The Daily Republican newspaper (now the Southeast Missourian) praised Murtaugh:

While he was here only five years, he made a great impression upon Cape Girardeau's residents, Catholic and non-Catholic alike. In 1928 a public park on Main Street, in front of Old St. Vincent's Church, was dedicated to his memory.

Above is a photo taken during the dedication of the park. 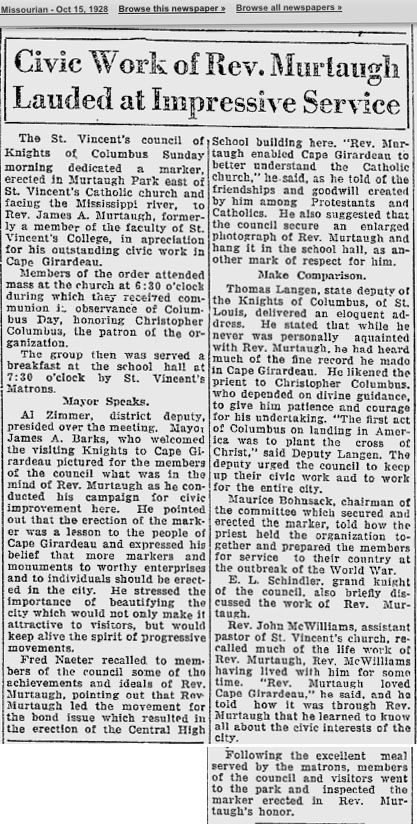