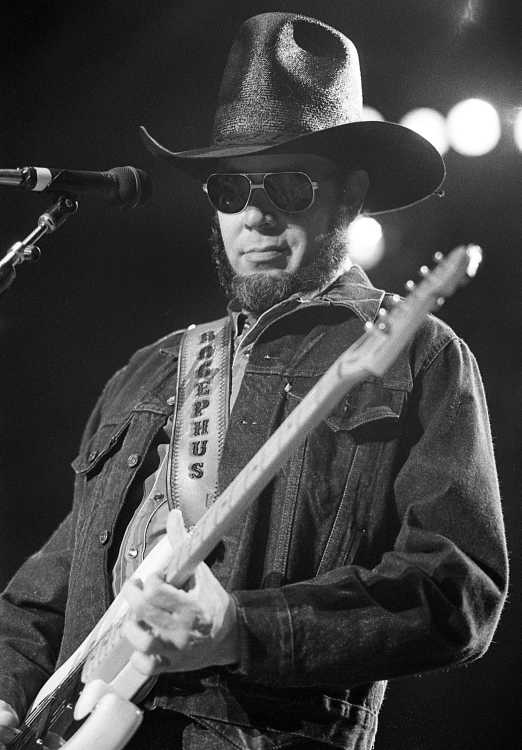 Hank Williams Jr. performed before a crowd of 5,550 Sunday night at the Show Me Center. (Mark Sterkel photo)

Amid echoes from President Reagan's visit to the Show Me Center last week, Hank Williams Jr. vaulted on stage with his "Wild Streak" tour Sunday night. Hank had the crowd of 5,550 fans in the palm of his hand throughout the evening, singing all his greatest hits in an elaborate and expensive stage show.

There was a time when people wanted him to be a carbon copy of his late father, the great Hank Williams, who brought respectability to country music. Hank was only three when his father died in 1953.

His first self-written hit, "Standing in the Shadows," dealt with living in the shadow of a famous man. Now 36 years after his father's death, Bocephus, as his father nicknamed him, has become a legend in his own time.

His show was an electrifying production where Hank danced all across the stage with his Bama Band, often playing several different instruments. To accommodate Hank's high energy show, a $1.5 million high-tech stage has been built, which took six months of designing. As a special effect, two specially constructed 12-foot lightning bolts "strike" periodically with a luminosity of two million candlepower apiece.

Hank and the audience became "one" when everyone joined together in singing his top hit "Family Tradition." Hank's fans know all the words to his song and several times Hank had the audience participating. The standing ovations became too many to count.

Spending 30 minutes sitting solo on stage, Hank bonded with the fans telling them about his life growing up, the Mountain accident in 1975, and hunting at his remote cabin in Montana. Hank is a dedicated sportsman who enjoys fishing in the Kentucky lakes and has won several hunting and fishing trophies.

He also told the audience about his sixties band called "Rockin' Randall and His Combo" and played a couple of tunes from those days to the fans' delight. Hank said he writes a majority of his own material. He said writing songs is the easiest thing in the world for him to do.

Hank invites all his fans to visit his newest museum in Paris, Tennessee, which had its grand opening last Saturday. The Hank Williams Jr. museum in Nashville has been a real treat for country music fans since 1986. Both museums are open seven days a week, year round, and showcases both Hank Sr. and Hank Jr.'s career with his many gold albums and awards, his customized pick-up truck and a rare glimpse into his childhood through his photos and collections.

The Greg Allman Band was the forerunner for the show. When asked backstage if he had turned to country style, Allman describes his music as "honest-rock-&-roll-blues-jazz-fusion." Allman also said he had only two shows booked with Hank this season, but he added that the "Wild Streak" tour was the best he had ever toured with.

Amid the thunderous applause, Hank vaulted offstage in a cloud of smoke singing his current hot single, "If The South Would Have Won." Now everyone knows why Hank named this tour "Wild Streak."