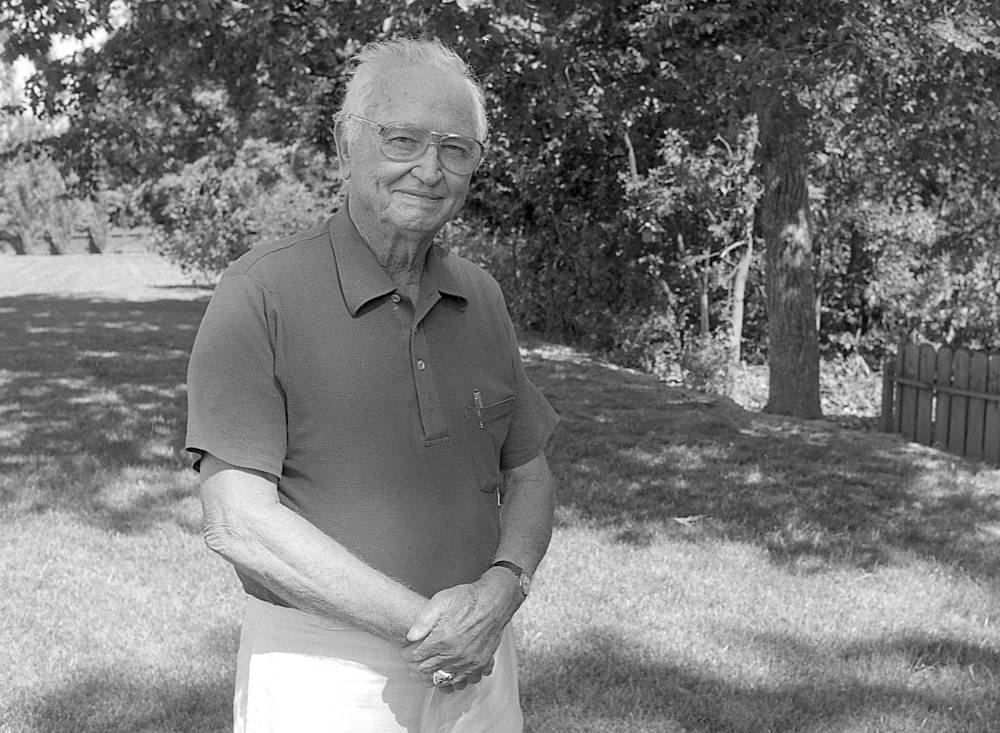 John Wescoat of Cape Girardeau reflects on the efforts undertaken to acquire the land for Trail of Tears State Park. He was also active in developing other parks in the area. (Joel House photo)

Wescoat: Past effort for Trail of Tears Park well worth effort

CAPE GIRARDEAU - With the opening of the new visitor's center at Trail of Tears Park, officials expect the number of park guests to increase.

Already, nearly 350,000 people each year enjoy the park's facilities and its unique history.

One person who's especially pleased so many people are relaxing at Trail of Tears Park is the man who is responsible for its existence--John Wescoat.

While he doesn't like to take credit for his work, this Cape Girardeau resident singlehandedly secured the property which makes up Trail of Tears Park, and it wasn't easy.

Trail of Tears Park includes a little over 3,300 acres which were owned by about 30 families, he recalled.

Trail of Tears State Park marks the first time Missouri citizens had ever purchased land to be donated to the state for a park.

In the early 1950s, the idea for the park originated with Charles Boutin of Cape Girardeau who became a member of the State Park Board.

He called together a committee to secure the property. Wescoat, who served 14 years as county assessor, was on the committee.

"I was given the job of securing options on the land," Wescoat explained from his Cape Girardeau home near Cherokee Park [now Kiwanis Park]. "We were really rather naive."

The committee had no money with which to purchase the property. Wescoat said the committee believed the necessary money could be raised through private donations.

"But, we didn't raise one nickel that way," he said.

While the committee was working first to try and raise money and later to get the bond issue approved, Wescoat and a few others were working to secure options on land in the proposed park. Options guarantee that property owners will sell for an agreed upon price if the project comes about.

"We got a number of options for six months," he said. "But it took longer than we thought. By the time we got to some property owners, the first options had expired."

"They quit. They didn't think it could be done," he said.

But Wescoat, driven by the belief that Southeast Missouri needed this park, re-embarked on his own.

"I took money out of my own pocket to pay for the options," he said, which this time were for an extended period of time. "I wanted to guarantee that we would have plenty of time to organize. I didn't get my money back. I didn't want it back."

He wanted a park.

Wescoat spent four months, "day and night," talking to property owners in the park site, convincing them to sell their land.

It wasn't an easy job. Many of the families in the proposed location had lived on that land for a very long time.

For some, the decision to sell was not difficult. But for others moving from their homes was a painful decision and required careful negotiating by Wescoat.

For example, he tells the story of a property swap needed to secure two tracts in the park.

So Wescoat talked with Ode Windeknecht who owned about 56 acres which fronted on the park. He agreed to sell.

Two acres went to Holcomb and 10 to Jennings, securing their property for the park. The other 44 acres were divided between the Boy Scouts and Girl Scouts.

Wescoat also tells of the Russell Fristo tract which was a rock quarry. The property had been willed to an association for blind people, and the association did not want to sell.

"Nobody wants a rock quarry in a state park," Wescoat said. "The lawyer promised me if they ever decided to sell, I'd have the first chance to buy. I later found out that he was going to sell it to a company in Illinois.

"After spending weeks and months talking to people, I wasn't going to let him scare me off."

So Wescoat went to visit the attorney (whom he declined to name).

The lawyer acquiesced, and the quarry is included in the park.

"After we got all the land north of Greensferry Road together," he said, "we presented it to the state park board. They turned it down. They wanted property south of Greenferry Road also so they could control the land. They didn't want taverns and honky-tonks built there."

Undaunted, Wescoat pursued the owners of the new property and finally negotiated options for that property also.

After all the options were secured, Wescoat turned his attention to passage of the bond issue needed to purchase the property.

"I would take 20 or 30 people out to the site and sell them on the potential of a park," he said. "Each would come back as a salesperson for the bond. It passed by a 17-1 margin which speaks highly of their work."

Wescoat recalls that the property was all purchased for $140,000. The extra $10,000 raised through the bond issue was turned back over to the general revenue fund.

"The original purchase price was only $140,000. Today the timber on the land alone is worth more than that. The park is worth millions of dollars."

However, it's not the figures which impress Wescoat. He is pleased that so many people enjoy the park.

Not satisfied with just Trail of Tears Park, Wescoat began looking for a location for a lake.

He first tried to locate a lake near the state park. But later began work on Lake Girardeau. As with Trail of Tears Park, Wescoat was charged with securing property options for the lake also.

"There again I ran into some rock-hard problems," said Wescoat.

He explained that the owner of one strip of land balked at the idea of a lake because people would be drinking and having parties at the lake.

"It was hard to argue with that," he said. "But I kept talking and finally got it."

Not surprisingly, Wescoat for a time served on the Cape Girardeau Park Board. "We discussed the need of a park in north and south Cape Girardeau," he said.

Again Wescoat was on the job. He arranged for the purchase of the properties which are now Cherokee Park [now Kiwanis Park] and Shawnee Park.

He has received some recognition for his work. The marina at Trail of Tears Park is named for him. [The marina no longer exists. A pavilion was built in his honor.] But recognition is not important to this man.

On some days, Wescoat said he will walk through one of the parks he helped to create just to watch people enjoying themselves.

"I go by and see the children playing soccer and baseball," he said with a smile.

Few people recognize Wescoat on these jaunts, but he doesn't mind. The fact that people enjoy the parks makes all his work worthwhile.