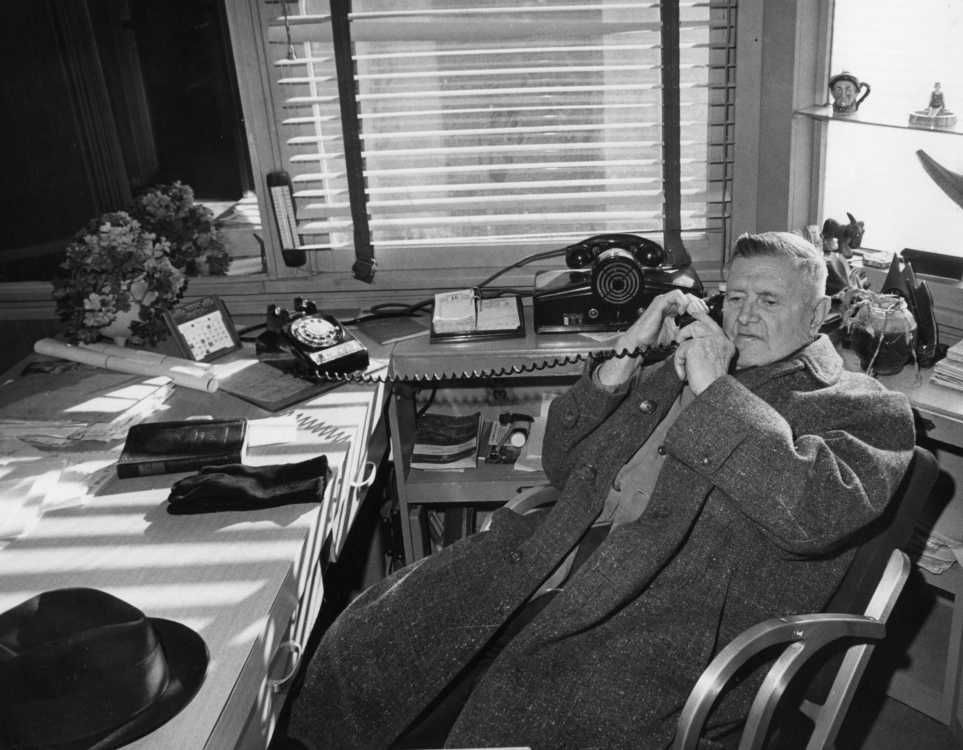 J.W. Gerhardt, still a busy man after nearly 60 years of contracting here, took time to remove his hat and gloves, but not his topcoat, before grabbing the telephone to conduct a pressing business matter. Mr. Gerhardt, founder and still head of the Gerhardt Construction Co., has supervised the erection of many major buildings in Cape Girardeau and elsewhere. (G.D. Fronabarger photo)

The breaking of ground for a major construction job, while marking the beginning of physical work at the site, is hardly the contractor's first effort on the job. His company by that time has already invested much time and attention in the undertaking.

The art of contracting for and erecting major buildings presents a dizzying array of problems, ranging from procuring materials to meet an exacting time schedule to coordinating the efforts of diverse labor and subcontract groups.

One of the contracting firms of longest standing in this area is the Gerhardt Construction Co., still headed by the man who founded it in 1909, J. W. Gerhardt.

What goes on in an average contractor's office, from the time a call for bids is made on a building project until the first bulldozer goes to work, was related by Mr. Gerhardt, speaking from the perspective of 57 years in the business. The contractor, if he is interested in bidding, gets a set of plans and specifications from the architect or engineer who planned the structure.

The major task before the contractor is estimating the cost of the project and preparing a bid which will strike the balance between adequate profit and competitiveness with other contractors.

Construction cost, from the contractor's standpoint, is divided into three broad categories, each of which requires its own process in estimating.

The three headings are subcontracts, labor and materials.

Bids are sought by the general contractor form the subcontractors who do the various specialized tasks involved in construction.

Excavation, at times, is done by the prime contractor; at others it is farmed out to subcontractors.

Low bids received by the general contractor for the respective special phases form the basis for part of the estimate and bid.

The same process takes place with respect to suppliers of materials. From the blueprints and specifications, the construction company can determine, or estimate, how much of the different kinds of materials will be needed and prices are sought.

Again, the best prices are combined to help make up the total estimate.

The third element, labor, is computed on a unit-cost basis.

"We know, for instance, how much it costs to hang a door. If there are 75 doors in the building, we multiply the unit cost times 75 and have our labor cost for door installation," Mr. Gerhardt explained.

A similar process takes place for the many other specific phases of work.

Construction men draw on the accumulation of years of experience in fixing the unit labor costs of particular jobs.

A variable in the formula is the prevailing wage scale for the craft in question.

This varies from locality to locality and changes regularly, usually each year.

A contractor, for instance, would bid a job at a different figure at Sikeston or St. Louis than he would at Cape Girardeau, because of the difference in wage scales in the different localities.

Preparing an estimate on a sizable construction job, Mr. Gerhardt said, requires the full-time efforts of an experienced construction man for about two weeks.

During the process, the contractor stated, it is sometimes, though not always, necessary to seek clarification on some point in the plans and specifications from the designing architect or engineer.

The construction bid, as assembled from material prices, unit labor costs and subcontract figures, is submitted to the owner together with the prescribed bid bond.

The bid bond binds the contractor to the construction job at the price he quoted, should his bid be chosen. If a contractor submitted the low bid and for some reason could not or would not perform the work, the bid bond would be forfeited.

Most public agencies make selection of contractors on the basis of the best and lowest bid. Sometimes an owner can make a clear-cut and rapid decision on this and award a contract at the amount bid.

Often, however, a contract is not awarded without a period of negotiation between the low bidder and the owner, with the architect-engineer usually a party to the conversations.

Sometimes the low bid still exceeds what the owner can pay or is willing to pay.

Compromise or change in plans and specifications can often lead to a solution and the issuance of a contract.

The award of a construction contract is the signal for a new round of activity in the contractor's office. Purchase orders for materials are issued, contracts are made with the low subcontract bidders and workers are hired.

Having materials on the job site when they are needed presents one of the contractor's most vexing problems.

It is not unusual, Mr. Gerhardt said, for construction officials to spend considerable time on the telephone checking on materials, urging their delivery.

The timing is usually intricate. The materials should not be on the job too soon because of problems of storage; yet they must be there when needed to avoid clogging up the entire building process.

Most labor for construction, Mr. Gerhardt said, is hired through the various craft unions. The carpenters, laborers, iron workers and others are hired, he said, as they are needed.

Key personnel, he pointed out, are on a construction company's full-time payroll.

The general contractor's work through the construction period, to a great extent, is one of coordination. It becomes his complex task to coordinate the operation of the subcontractors and the different labor crafts and, at the same time, deal with the owner, represented by the architect on the job site.

"You should see the bookkeeping we have to do, the letter writing and telephoning," Mr. Gerhardt commented.

These are the kind of problems Mr. Gerhardt has been grappling with since 1909, but the result has been the construction by his company of more than 3,000 buildings in Missouri, Illinois, Iowa, Kansas, Oklahoma, Texas, Arkansas and Mississippi.

Most of them are large commercial and public buildings, but the company also has erected some homes. One of the Cape Girardeau residences of note, built by the Gerhardt company, is the Erlbacher home at North Boulevard and Highland drive.

The company has done extensive school work here and elsewhere. The Gerhardt company was the contractor for the Central High School, Jefferson School, May Greene School and most recently, Hawthorn School.

The Gerhardt concern built the Missourian building in 1925. It has done considerable work for Southwestern Bell Telephone Co., including the latest addition to the building here in 1964.

Other large buildings erected by the company include the Wetterau Grocery Co. warehouse at Scott City and the powder plant at Wolf Lake, Ill.

Another of the contractor's recent projects was the addition to Southeast Missouri Hospital.

Mr. Gerhardt, still heading the firm he founded, has been followed by his four sons in the construction business here.

Three of the sons are officials in the Gerhardt Construction Co., under their father. They are Reginald, Kermit W. and Wm. A. Gerhardt. The fourth son, Burton J. Gerhardt, heads a construction company of his own.