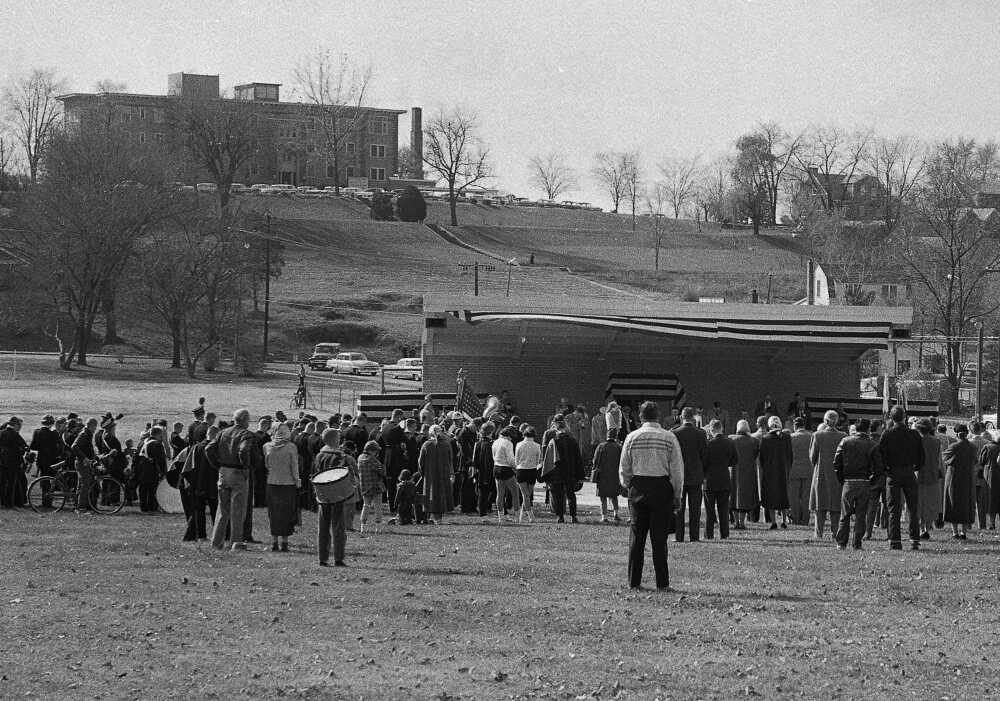 A Veterans Day program was held at the newly-built bandshell in Capaha Park on Nov. 11, 1957 after veterans groups marched in a parade on Broadway to the park. Southeast Missouri Hospital is seen on the hill. (G.D. Fronabarger photo)

In a formal memorial service conducted this forenoon at the band shell in Capaha Park, Cape Girardeau paid tribute to all the nation's dead in war and to the service of the men and women in the armed forces. The ceremony followed a parade which included a number of marching units led by the massed colors of the three sponsoring organizations--American Legion, Veterans of Foreign Wars and the Disabled Veterans.

A sizable crowd gathered in the sun to take part in the service and to hear Roy Carver of Jefferson City, American Legion state service and finance officer, define the meaning of Veterans Day, to honor the nation's dead in war and to plead for greater unity so that their lives will not have been lost in vain.

"Veterans Day, at one time known as Armistice Day, is now a day embracing the sacred memories of all who died in all wars, it is concentrated to the valor and sacrifice of all generations. It is a day to keep forever green the memories of the cost in American life, American blood, American toil and American sweat which has gone into the founding and preservation of our nation since the beginning," Mr. Carver said.

He said this is a country with a government of the people, by the people and for the people and that our belief is for a free life, liberty and pursuit of happiness; that each generation of Americans has been blessed with men and women who believed in these personal values and each succeeding generation has extended this belief to the next to insure every American child of its heritage of freedom.

Briefly outlining the various wars and their cost in American dead, Mr. Carver said those who lost their lives were all keepers of American faith. "The yardstick of freedom is courage, it is faith rooted in immortality and a belief in what is right as God shows it to us," he continued.

"Today, however," Mr. Carver stated, "we face another survival test--a double-edged threat of world Communism from without and the galvanized 5th Columnists from within. The latter organization is now enjoying an immunity while plotting the destruction of our country."

He pleaded that Americans not give up the fight against subversion, but that they work as a patriotic team with each dedicated and patriotic American prepared to meet the challenge which the nation faces.

"In our nation, there is now a new crime--the crime of getting caught," Mr. Carver said. "There is a trend of softness toward wrong-doing, the nation is faced with public apathy, and aggressive forcefulness is raising the cost of speaking up for and defending America."

He said that Communist and anti-Communist now hold the upper hand, that they are well organized and that Americans must guard carefully so that the words of Khrushchev, "our grandchildren will live under the heel of Communist socialism" will not come true.

"We must dispel the apathy of the majority, we must expand our youth training programs so that our goal is to bring new generations of Americans whose words will be as good as gold bands, who will understand and safeguard their every cherished right, who will have the moral courage to defend their personal beliefs and their national heritage. We must keep faith for them--build American strength with more veterans and other patriotic organizations with patriotic growth and an American character--this is our best hope of freedom for all mankind," Mr. Carver concluded.