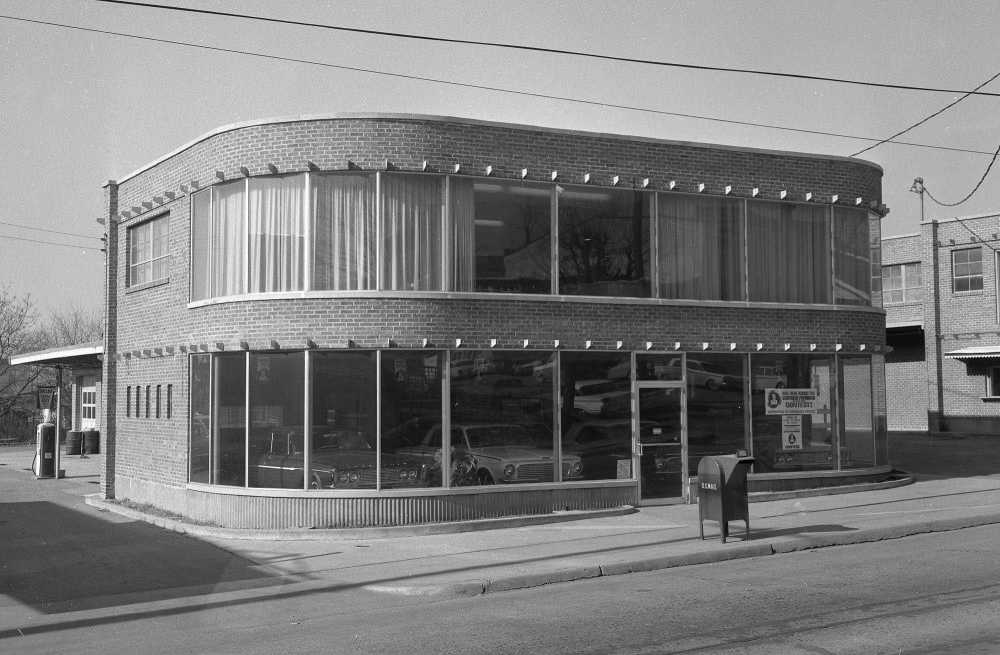 The Erlbacher Building, 1105 Broadway, is one of two neighboring structures built by Eddie Erlbacher. According to the Feb. 1, 1958 edition of the Southeast Missourian, this building was first occupied by Edgewater Motors, Inc. which sold Edsel and Renault automobiles.

G.D. Fronabarger took this picture for the 1963 Achievement Edition of the Southeast Missourian. The photo was used in an advertisement for Nations' Plymouth-Valiant. The business was owned by Wayne Nations.

According to city directories, by 1962, the building was occupied by Jan Chick Tire Co. Nations' Plymouth-Valiant is listed in 1964 and 1965. By 1967, it was occupied by University Shop sporting goods. Rhea Optical moved in by 1974 and remained for nearly 35 years.

At one time the upstairs level was leased by the city Board of Education and Superintendent of Schools. By 1967, it was leased by Metropolitan College of Business and Technology. Later an indoor miniature golf business was there.

From the National Register nomination, written by Terri Foley, 2009:

The Erlbacher Buildings were constructed 1957-58 by Eddie Erlbacher as commercial lease properties. In October of 1945, Erlbacher and his wife Grace purchased the property from L.F. Brenneisen and Dasie I. Albert. Erlbacher intended to build one large Streamline Moderne style commercial building to house two automobile dealerships and garages on the property. At the time of purchase, located on the property was a large boarding house, known as the Adams House, which had once been a single family residence. This area of Broadway was still mostly residential in 1945. To the east were a few commercial buildings. On the west side of the property were residential buildings in the next two lots. Houses were located on the street to the rear (south) of the property. Across the street to the north was Houck Stadium which set back from Broadway and was surrounded by houses to the east and west.

Erlbacher planned to demolish the boarding house in order to construct this large commercial building and lead the way in commercial development of the area. However, Erlbacher's plans for development were stalled when some residents of the boarding house refused to vacate the premises. On January 26, 1946, Erlbacher announced his plans to vacate the Adams House within a week so he could prepare the site for his construction project. Erlbacher had given eviction notices in November of 1945 to the ten families living in the Adams House (about forty people in all) but eight of the ten families had not found a new home. After months of trying to persuade the last boarders to move, Erlbacher finally started the demolition process on the vacant part of the building. By doing so, the final boarders had no choice but to relocate.

Groundwork started on October 29, 1946, for what would have been the largest building on Broadway if completed. The design was by local architect Harold W. Long. However, the project was hindered for over a year upon completion of the foundation by a post World War II steel shortage. By May 1948, Erlbacher had received only half of the steel needed for his proposed one-story Streamline Moderne style building to house the Homer Milikan Motor Company and the Waller Motor Company. Not until September 9, 1948, had enough steel been received for construction to proceed. The 1949 and 1951 Polk's City Directory of Cape Girardeau listed the property as under construction, but the project was stalled again when labor problems arose. This time, Erlbacher suspended construction for what turned out to be several years.

In the fall of 1957, Erlbacher decided to resume construction at 1105 and 1107 Broadway. But this time he felt it would be more financially feasible to erect two smaller buildings with basements. As to the earlier design, the style was to be Streamline Moderne. The buildings would be constructed of steel, brick and concrete and would feature extensive walls of glass. With enough steel on hand, construction started in the fall of 1957. The Erlbacher Buildings were completed by July of 1958...

Editor's Note: Rhea Optical occupied the building until leaving in 2009. A Mexican restaurant, El Sol, occupies the building in 2014.