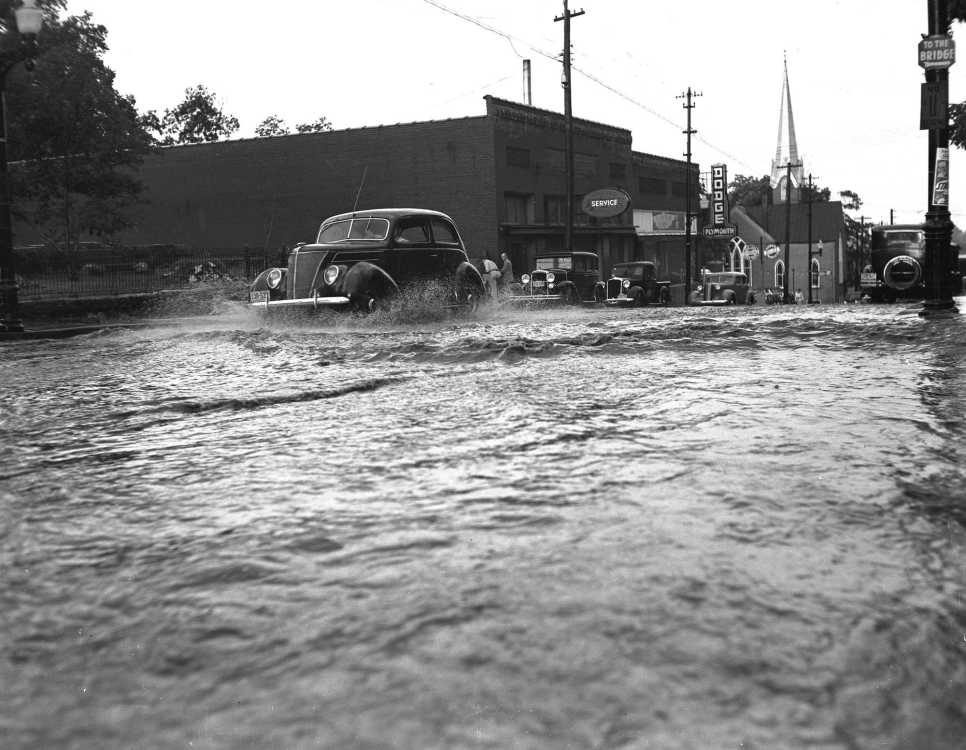 A 1937 Ford approaches Lorimier Street in the flash-flooded 200 block of Broadway during the late 1930s in Cape Girardeau.

The building is the Harris Motor Car Co., Cape Girardeau's agent for Dodge cars. Our librarian, Sharon Sanders, found some information about the business in the Southeast Missourian archives.

The building was constructed in 1915. It was later expanded 50 feet on the east side. A brick annex was constructed at the north end in 1934 for storage of new automobiles.

Dr. Adolph List, oldest dentist in Cape Girardeau and one of pioneer residents of city, dies at his home at corner of Broadway and Lorimier; Dr. List was born in Germany on March 11, 1844, and emigrated to America in 1870; he was in this country only briefly before being called back to serve Germany in Franco-Prussian War; he eventually returned to Cape Girardeau where he practiced dentistry until last November, when he became ill; he is survived by his wife and two sons.

Large corner store quarters of new Harris Building, Broadway and Lorimier, in final states of completion, has been rented to L.O. Townsend, who will have opening next Friday of Cape Girardeau store of Townsend Furniture Co.; Townsend also operates stores in Oran and Caruthersville.

Cape Girardeau County Selective Service Board, which this afternoon dispatches its March contingent of 23 men to St. Louis for induction into Army, will move Thursday to new quarters on first floor of Harris Building.

The Harris Motor Car Co., 232 Broadway, has been given the franchise to handle the Jeep family of four-wheel drive vehicles.

Cape Girardeau Civic Center, Inc. has taken 30-day option on property in 200 block of North Spanish; property is 245 by 25-foot lot, containing large building of brick and concrete construction; it is now owned by General Baptist Church, and is located on west side of Spanish, across driveway north of church; it formerly housed Harris Motor Car Co., truck division.

Instead of tearing down buildings no longer usable by congregation of General Baptist Church, two other groups will utilize historic downtown landmark and nearby recreation building, which was formerly owned by Harris Motor Car Co.; contract has been made by Free Will Baptist Home Mission Board for purchase of church at 200 Broadway, which had been used by Baptists for worship since construction in 1893; Cape Girardeau Civic Center, Inc. last night approved steps toward renovation of building beside church at 201 N. Spanish, to be used as community recreation and education facility.