A.S. Duckworth's gift to the university

Albert Stone Duckworth was the curator of the museum at Southeast Missouri State University from 1926 until his death in 1958.

His obituary relates that Duckworth started his professional life working for a Chicago lumber company. Shortly after moving his family to Cape Girardeau in 1903, Duckworth "was called upon to make a timber survey for the Japanese government in 1907. And on two other occasions he made trips to Japan in connection with the timber industry." He spent many years buying lumber overseas for the firm he represented.

Just how his interests migrated from timber buyer to museum curator isn't stated in the obit. But perhaps it had something to do with his interest in collecting fossil specimens. Thousands of them, apparently. In 1935 he gifted his collection to the college. 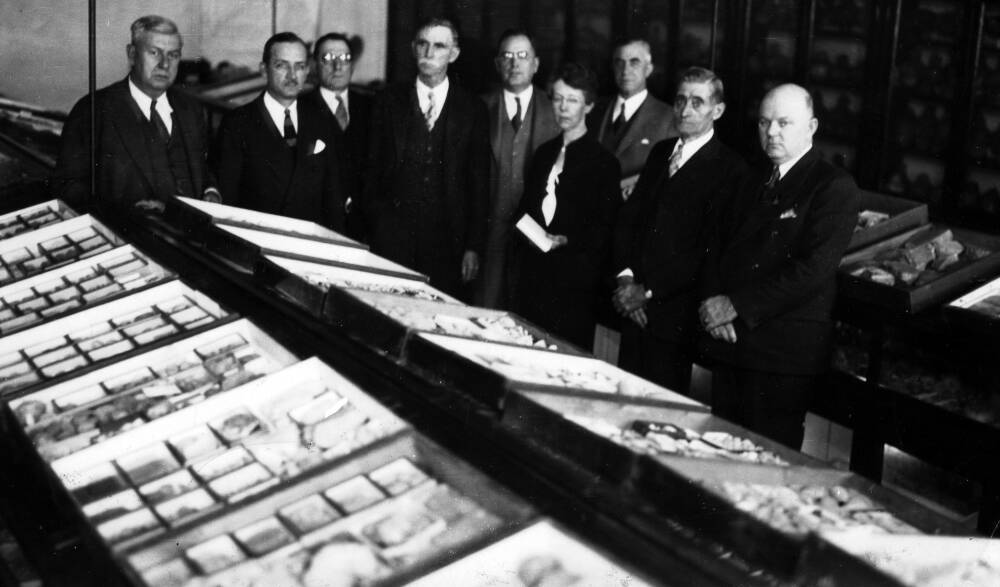 This picture was taken as the Board of Regents of State College formally received from A.S. Duckworth, curator of museums at the college, his collection of 10,000 specimens of fossils, some of them said to be millions of years old. A part of the collection is shown. In the picture, left to right, are Ralph E. Bailey of Sikeston, Fred A. Groves of Cape Girardeau, John F. Lottes of Perryville, George Munger of Bloomfield, Eugene McGee of Poplar Bluff, Mrs. Christine Wheeler Heil, secretary to the board, Cong. Orville Zimmerman of Kennett, A.S. Duckworth, curator of museums, and President W.W. Parker of the college. (G.D. Fronabarger ~ Southeast Missourian archive)

BIG FOSSIL COLLECTION TO BE PRESENTED TO STATE COLLEGE

A collection of 10,000 specimens of fossilized pre-historic animal life, valued at thousands of dollars, will be formally presented to State College by Prof. A.s. Duckworth, curator of museums at the college, Friday afternoon at the meeting to f the Board of Regents. Prof. Duckworth, a widely known authority on geology, particularly as pertains to the geology of oil, will make a brief talk explaining the collection at a luncheon of the Regents and some members of the faculty at noon at Albert Hall. Following this presentation will take place in the museum at Academic Hall.

Reluctant to discuss the monetary value of the big collection, Prof. Duckworth said that the real value of the collection is in the fact of the existence of it, which makes it possible for present age inhabitants of the earth to know that life in varied forms did exist in times preceding man and with these fossilized forms, or "rock" specimens, he is able to trace to a fair degree of accuracy the transition of life to the present.

Of course, no person really knows the exact age of such material, but the curator said that some of these specimens he is to present in all probability date back to the Cambrian age, which science estimates occurred some 300,000,000 years ago. Others of the collection are more recent.

An important and interesting observation about this collection is that it required Mr. Duckworth nine years of research. Some of the specimens he gathered personally along the shores of many seas bordering America, others from the mud deposits and upheavals of earth characterizing certain geological formations in scattered sections of the country. But most of the collect was obtained through exchanges with other colleges and universities throughout the United States.

Exchanges were affected with Washington, Rutgers, Michigan, University of Washington, Missouri, Cincinnati and Princeton universities and many other schools. Known over the country, many museum curators communicated with Prof. Duckworth asking for certain specimens of a microscopic collection he is now assembling and which already consists of approximately 125,000 specimens.

In exchange for these specimens, which are so minute they are mounted on glue under a cellophane slide suitable for microscopic examination, he has received the larger fossil specimens characteristic of the fossil deposits in the vicinity of the universities with whom he made the exchanges.

The abundance of life in the pre-historic periods is exposed in this collection, which also contains, besides the life of the very beginning of life as science has recorded it, specimens of the Jurassic and Triassic periods, the latter being the most recent period.

In the first period, Jurassic, amphibians declined and reptiles and ammonites developed rapidly, then this age was succeeded by the Triassic period, in which aquatic life was even m ore prolific and birds also made their first appearance.

In Prof. Duckworth's collection are seen a myriad forms of shells and sea animals, from almost microscopic in size to those of great size. Many of them were found along the sea shores of America, others dug from far under ground, and still others were revealed in rocks as they were torn away from uplifts by streams, The reason so many of these specimens have come into the hands of scientists, Prof. Duckworth explained, is that in succeeding periods upheavals of land have occurred, lifting the long embedded dead life, which has turned to rock, to the surface of the earth.

Excavations for buildings and bridges have brought to light many interesting forms of pre-historic life. For instance, Prof. Duckworth has in his possession the rib of a mastodon, huge forerunner of the elephant, which was dug from the bottom of the Mississippi River at the location of Pier No. 2 when the traffic bridge being constructed, and also the fossilized jawbone of a pre-historic elk, unearthed when the excavation was being made for the Montgomery Ward & Co. store building on Main Street.

Perhaps the most interesting to the ordinary observer, who knows little or nothing about geology, are the huge ringed specimens of pre-historic aquatic life. They appear as huge sea mussels or other animals inhabiting shells. Of course, they are now fossilized. Many of these have been dug from solid rock.

Others resemble the skeletons of very small animals, and still others are evidently fossils of bones and parts of the bodies of things which lived long ago. Sections of vertebrae from huge lizards which must have been 30 to 40 feet in length and others which are teeth of carnivorous animals of a past age are included.

But, another importance is attached to the collection. Securing the specimen, naturally, is the big objective in assembling such a collection, but Prof. Duckworth attaches a great deal of significance in the preparation of a collection. This entails the proper cleaning and preservation of such specimens. Often they come to him encased in solid rock, and days must be spent with dental tools and water in cleaning the specimen so that its restoration approaches as close as possible the original characteristics of form.

Virtually all of the curator's spare time is spent in the museum or in his home laboratory where the specimens are prepared with painstaking care. The fact that the collection is so well assembled and identified and the specimens have so much of their original appearance has added great value to it.

In 1926 Prof. Duckworth presented an even larger collection, of about 60,000 specimens, to the college, this consisting of fossils of plant and animal life and sea shells, most of which the curator gathered in his roaming over the North American continent, in Asia and in Europe.

The collections, along with the famous Beckwith collection of Indian relics which is conceded to be one of the most complete in America, is visited frequently by students in schools throughout this section, and students in geology at the college find the museum as a practical laboratory fr their work.

Mr. Duckworth regards the study of geology as a division of science which incites probably as much interest in the student as any other phase.

"Each of these specimens is a page in the book of the history of life. The Almighty has placed these things in the earth and preserved them for our study. Not all is known about them, but His record of actual things stimulates in those of us who are scientists the impulse to learn more," the curator comment.

Finding it curious that A.S. Duckworth donated his first collection of fossils the same year he was named museum curator, I did a little more digging and found this in "Normal to University: A Century of Service": "Periodically, the College was given various gifts, the most significant in the 1920s was A.S. Duckworth's paleontological and conchological collection of about 30,000 specimens gathered from all parts of the world. In addition to its beauty, the collection revealed characteristic stages in the development of lower life forms. In accepting the collection, the Board of Regents also announced Duckworth's appointment as Curator of Museums."

That information came from the April 1, 1926, edition of the college's student newspaper, "The Capaha Arrow."

A.S. Duckworth was born April 28, 1863, in Davis County, Iowa, son of William A. and Rebecca Evans Duckworth. He married Lottie Boutin on June 22, 1896, at Centerville, Iowa. He passed away Sept. 29, 1958, in Cape Girardeau. Along with his widow, he was survived by a daughter, Ramona Steinbeck, and two sons, Vice Admiral H.S. Duckworth and Samuel B. Duckworth.

Mr. and Mrs. Duckworth are both buried at Cape County Memorial Park in Cape Girardeau.

Over the years, A.S. Duckworth's collections of fossils were dispersed among the various departments of the university.