From the archive: The first Parade of Lights boasted 57 units

By rights, we should have officially started the Christmas season in Cape Girardeau Sunday with the 27th annual Parade of Lights. But, alas, COVID-19 decided to play Grinch, and Old Town Cape canceled the event that easily draws thousands to downtown Cape Girardeau the first Sunday after Thanksgiving each year. It was the responsible thing to do, in light of the pandemic.

Still, I miss seeing the lights and the floats, and hearing the music performed by the marching bands. And I'm sure there are a lot of other people who find their Christmas spirit is a little deflated this year. That's why I thought it might be fun to remember the first Parade of Lights — the brainchild of Dennis "Doc" Cain — staged in 1993. Here are a couple of stories about the event and a few photos of the parade itself.

Parade of Lights planned to kick off holiday season

The first annual Christmas Parade of Lights will inaugurate the holiday season in Cape Girardeau this year. Bart Simpson will serve as one of the parade marshals.

The parade, sponsored by the Downtown Merchants Association and KBSI, will be held Nov. 28.

It will begin at dusk at Capaha Park with the lighting of the city's Christmas lights, and follow Broadway down to Main Street and the south downtown parking lot.

Entries will be in three divisions, including motorized, floats and walking, said Doc Cain, the parade chairman.

"We are encouraging all civic groups, church organizations, businesses and scout troops to enter."

Prizes will be awarded in each category.

Cain said letters will be sent to businesses inviting them to sponsor a float. Marching bands also are expected to participate. He said individuals who want to be in the parade also are welcome.

Area high school bands also have been asked to march in the parade.

There are no restrictions on the type of floats that can be entered, as long as they have a Christmas theme, Cain said. "We're hoping it in some way will be lighted.

"... We are hoping to have all the businesses lighted as well."

While Christmas parades are held in numerous surrounding communities, Cape Girardeau has not had one for at least 30 years.

In 1952, the parade was called "Salute to Santa Claus" and was "witnessed by throngs along line of march," according to Southeast Missourian files.

Cain said the idea of reviving the parade came up with the merchants association last year."KBSI getting involved helped make it happen."

Characters from some KBSI programs, including the cartoon series "The Simpsons," also will participate in the parade. The Pink Panther, Bugs Bunny and others are to be in KBSI's Kids Clubhouse, which will be pulled by the truck with the Fox spotlights on it.

"We thought it was time to do something here," he said.

"This is going to be a fun weekend," Engles said. "I know the downtown stores are going to enjoy it. I hope thousands of people will turn out. 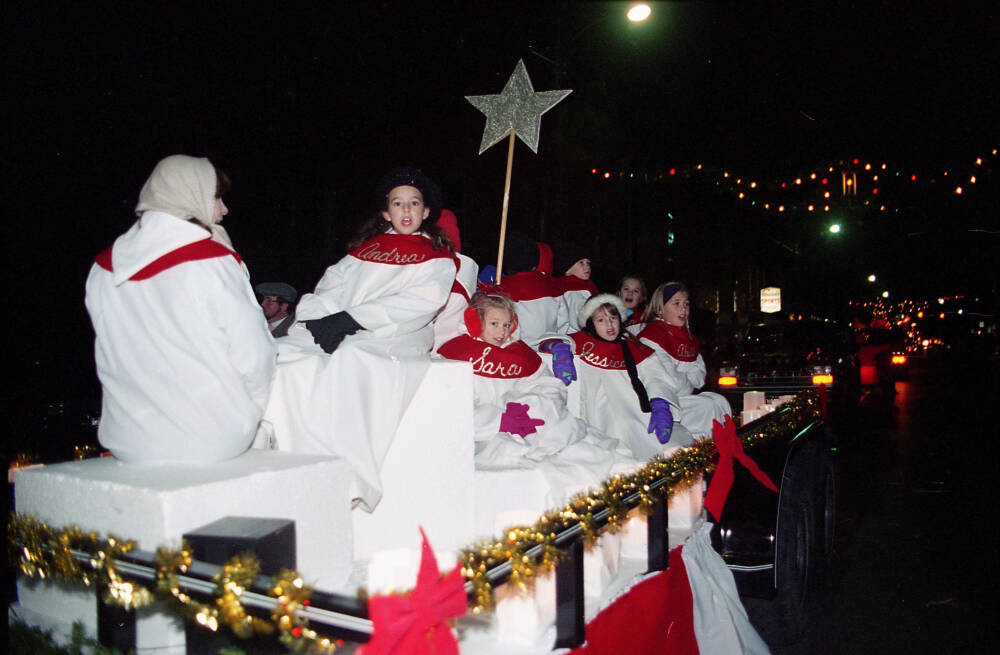 Children of the Christ Episcopal Church parish riding on a float in the Cape Girardeau Christmas Parade of Lights on Sunday evening. (Melina A. Mara ~ Southeast Missourian archive)

Parade of Lights proclaimed a success

A Santa and sleigh shooting into the sky, firefighters and a ladder truck garlanded with more than 60 strands of lights, and an array of mechanical elves were the stars of the first annual Christmas Parade of Lights Sunday.

Fifty-seven entries started down Broadway just after dusk, just after Santa Claus flew in a helicopter from downtown to the starting point at Capaha Park. A parade spokesmen reported a big gathering of onlookers downtown, where a number of stores opened for the occasion, and a larger-than-expected crowd along the route.

The Sweepstakes Award was won by Acorn Enterprises' skyward-bound Santa, a concoction of plywood reindeer with big eyelashes and a snowy white material which actually concealed a raised dump truck. Gary Scherer, whose company makes moldings and floors, said members of his family and his Farrar family in-laws worked on the float all week.

The Best Float Award went to Hutson's Furniture with its moving assemblage of mechanical elves.

One firefighter said they worked from noon until 3:30 in the afternoon stringing the estimated 6,000 lights.

Members of Hobbs Chapel United Methodist Church, whose historic building burned down over the weekend, received the Christmas Spirit Award.

A number of churches entered floats in the parade, dressing up congregation members in Nativity scenes. "Wise Men Still Seek Him" was the message offered by the First General Baptist Church.

Civic organizations like the Excelsior Optimist Club, the Cape Shrine Club and the Downtown Neighborhood Association were represented, along with the USS Sally Ride, the local Star Trek fan club.

Franklin School and the St. Mark Pre-School were there, as was the Cape County Democratic Club, classic cars and bikers on Harleys.

The Southeast Missouri Council on the Arts used the occasion to promote the upcoming Broadway Community Theatre play "Cheaper by the Dozen."

A number of businesses entered. The natural was Sunny Hill Gardens' Christmas tree float, but others like Metro Business College and Four Seasons Beauty Supply joined in with displays.

The parade marshal was Bob Hendrix, past president of the Cape Girardeau Chamber of Commerce. Bart Simpson was right behind in the KBSI-TV float.

The parade, the first Christmas-time event of its kind in the city since the 1950s and the first ever held at night, was sponsored by KBSI-TV and the Downtown Merchants Association.

Steve Engles, the station's general manager, said he and Dennis "Doc" Cain, the parade's chairman, had never run such an event before. "We learned a lot but we pulled it off with no knowledge," he said.

Engles said a number of merchants who did not participate in Sunday night's parade were impressed and want to get involved next time.

Inexplicably, the Missourian only published only one photo of the parade, above. But I managed to resurrect a few more, including one of the Sweet Adelines with Middle Sis sitting next to my fellow alto, Irene Stevens. All were taken by Melina A. Mara. 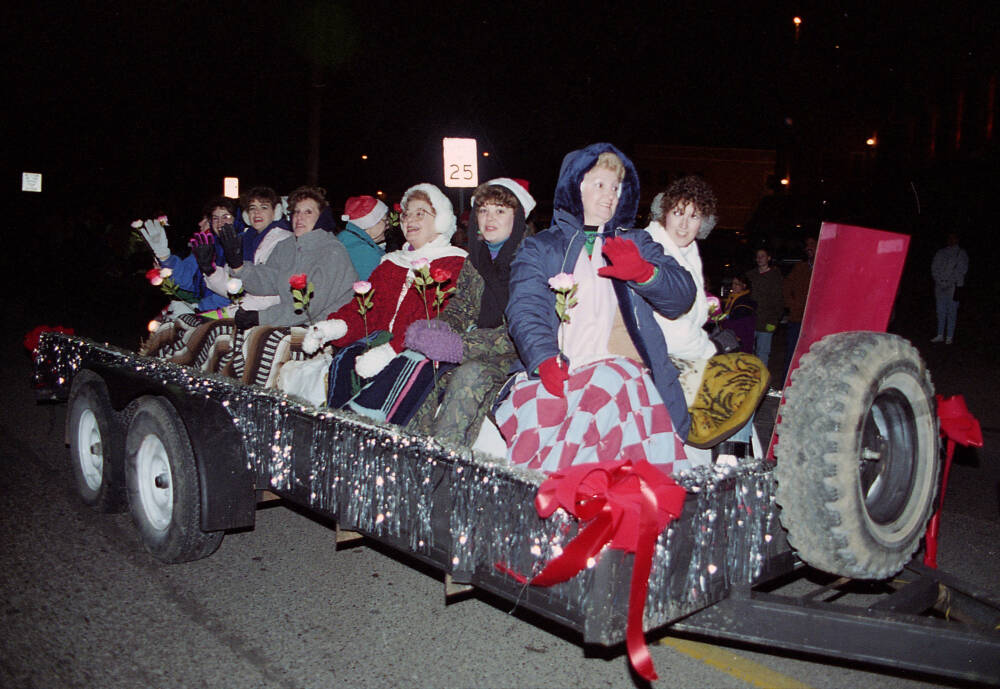 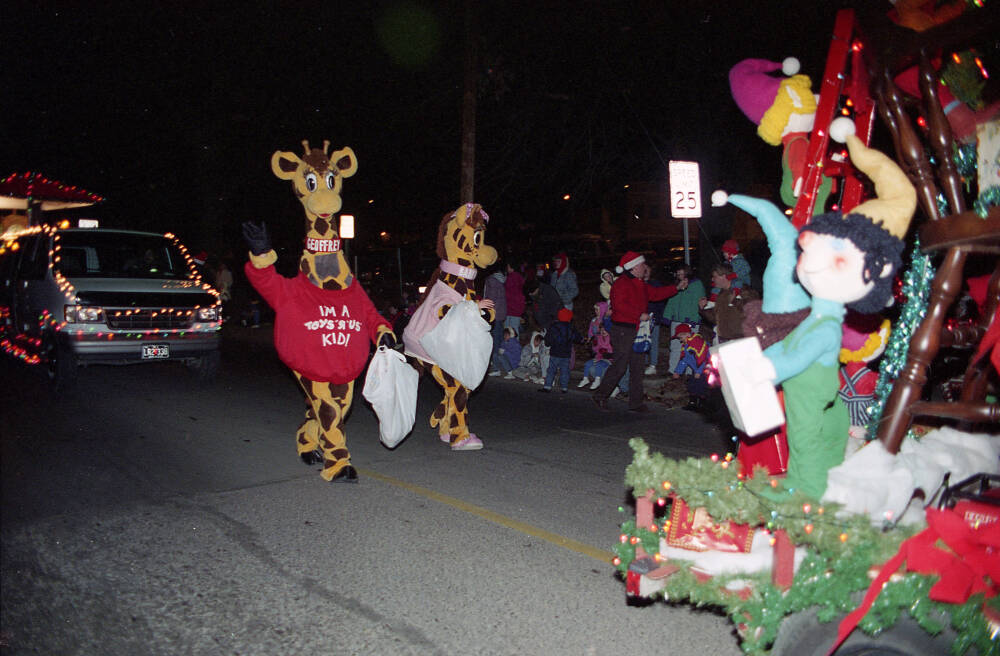 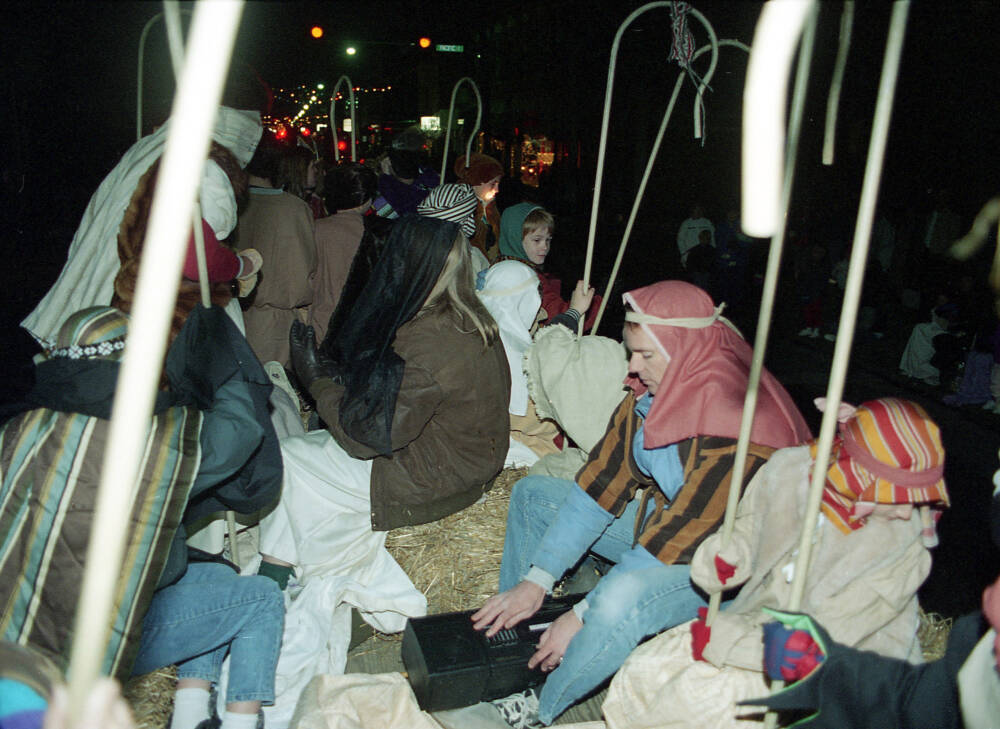 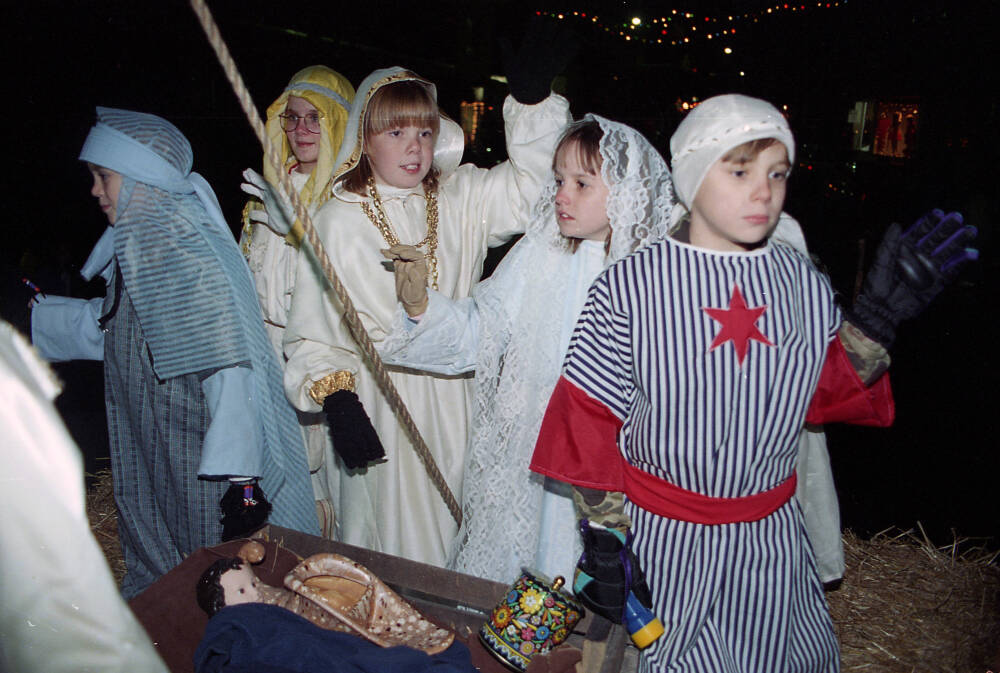 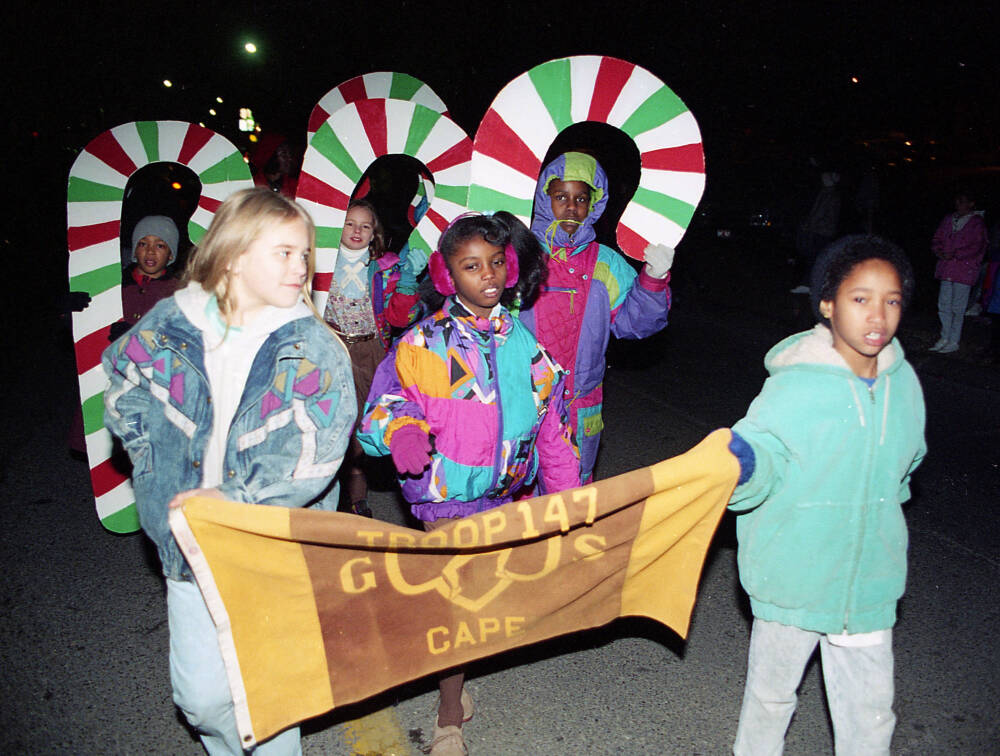 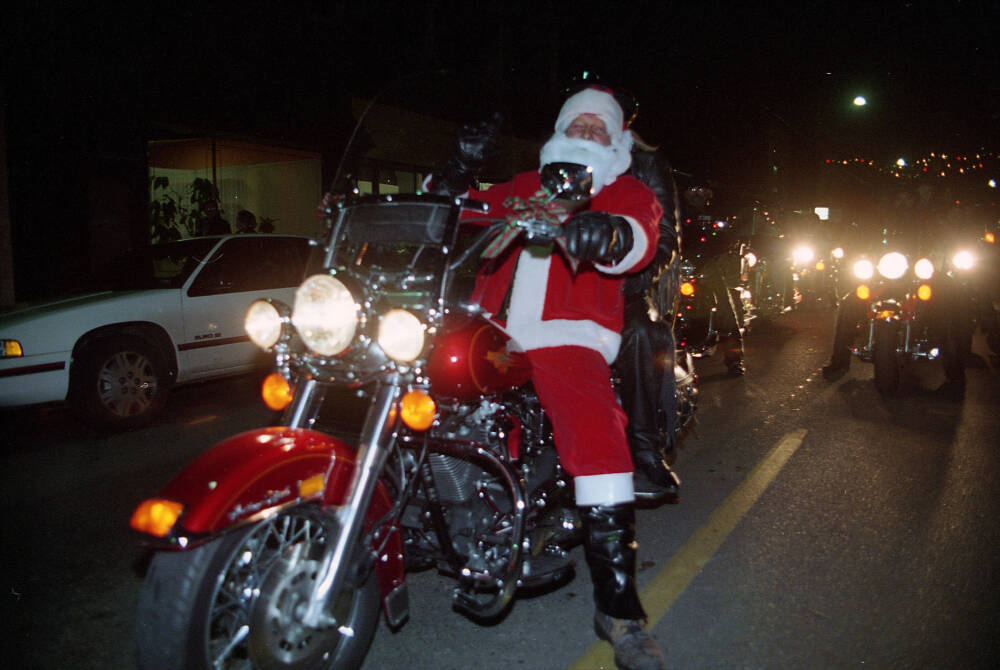 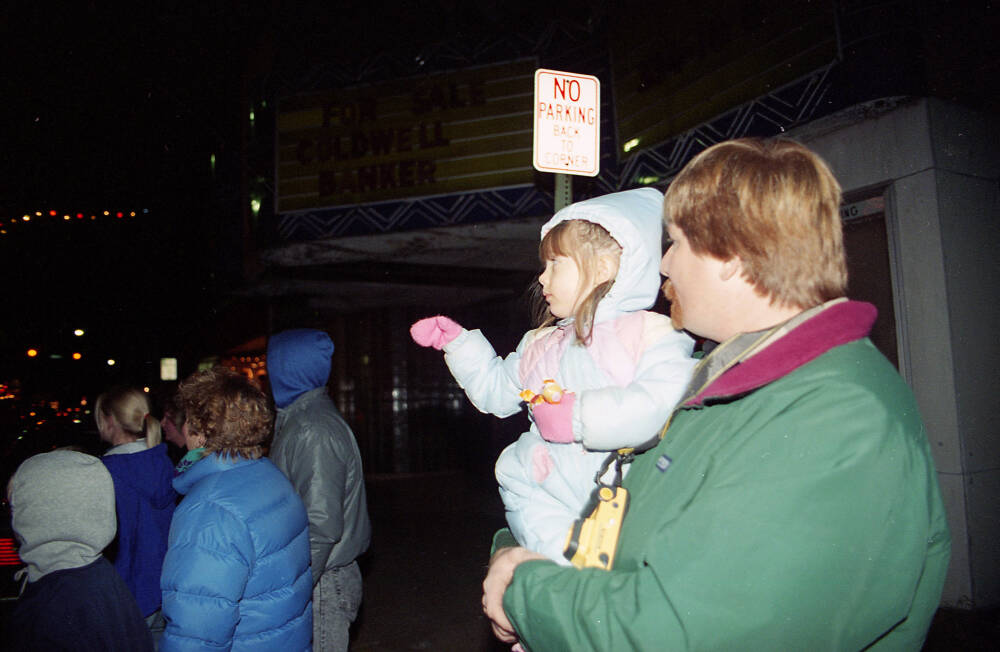 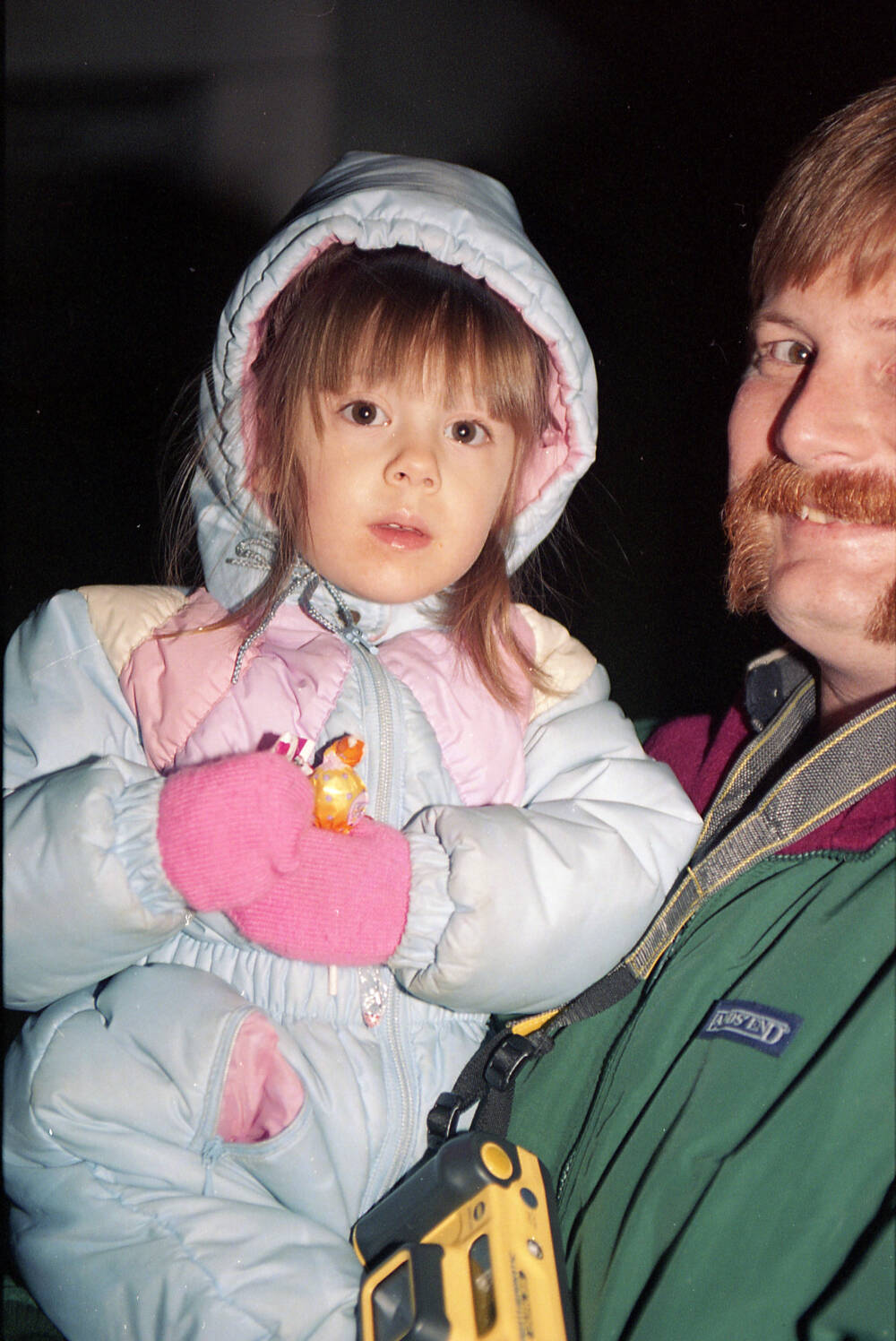 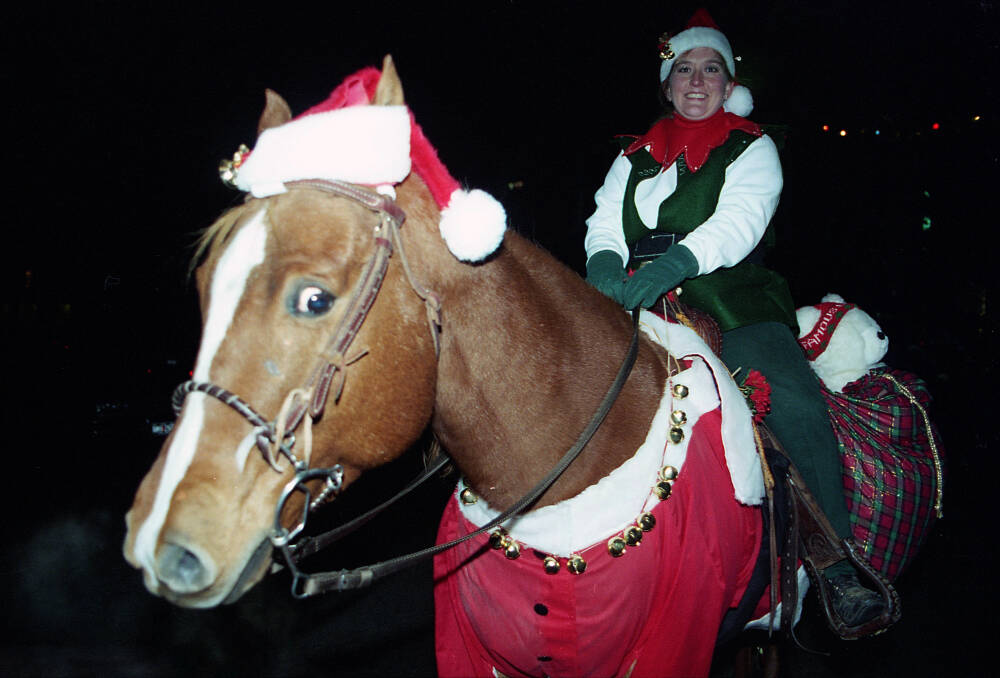 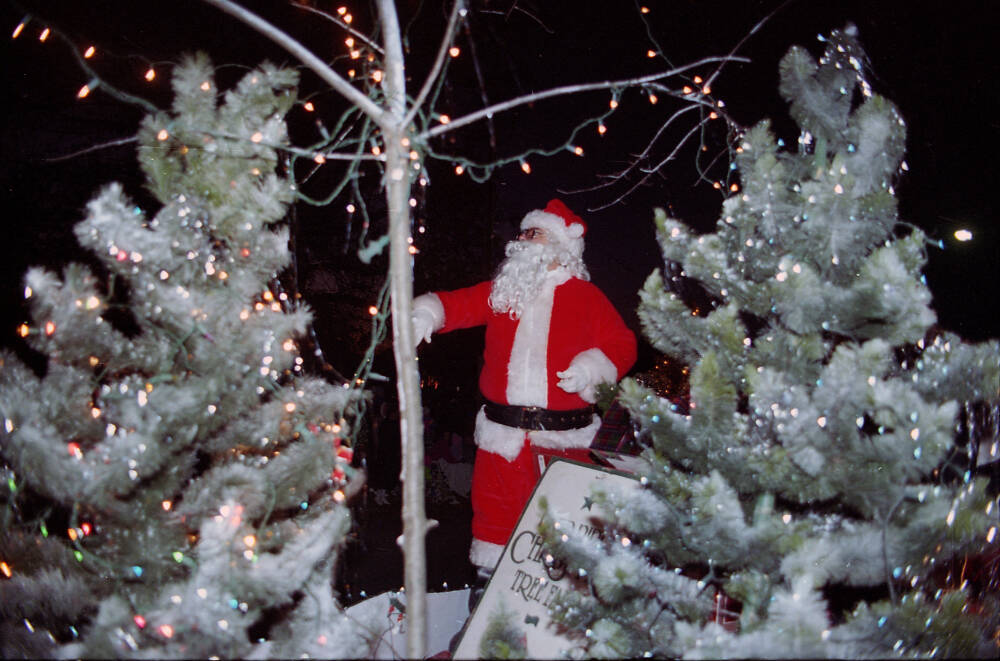 I remember attending this first annual Parade of Lights with Big Sis and possibly with Niece K. The memories of numerous parades all blend together after a while.

But what I do remember about this 1993 parade was the wave of emotion I felt when the Hobbs Chapel United Methodist Church unit passed us. The float carried members of the congregation enjoying their part in the event and bringing cheer to onlookers. This after having lost their historic church to fire just days before. Their float was given the Christmas Spirit Award.