From the archive: Preserving his father's legacy 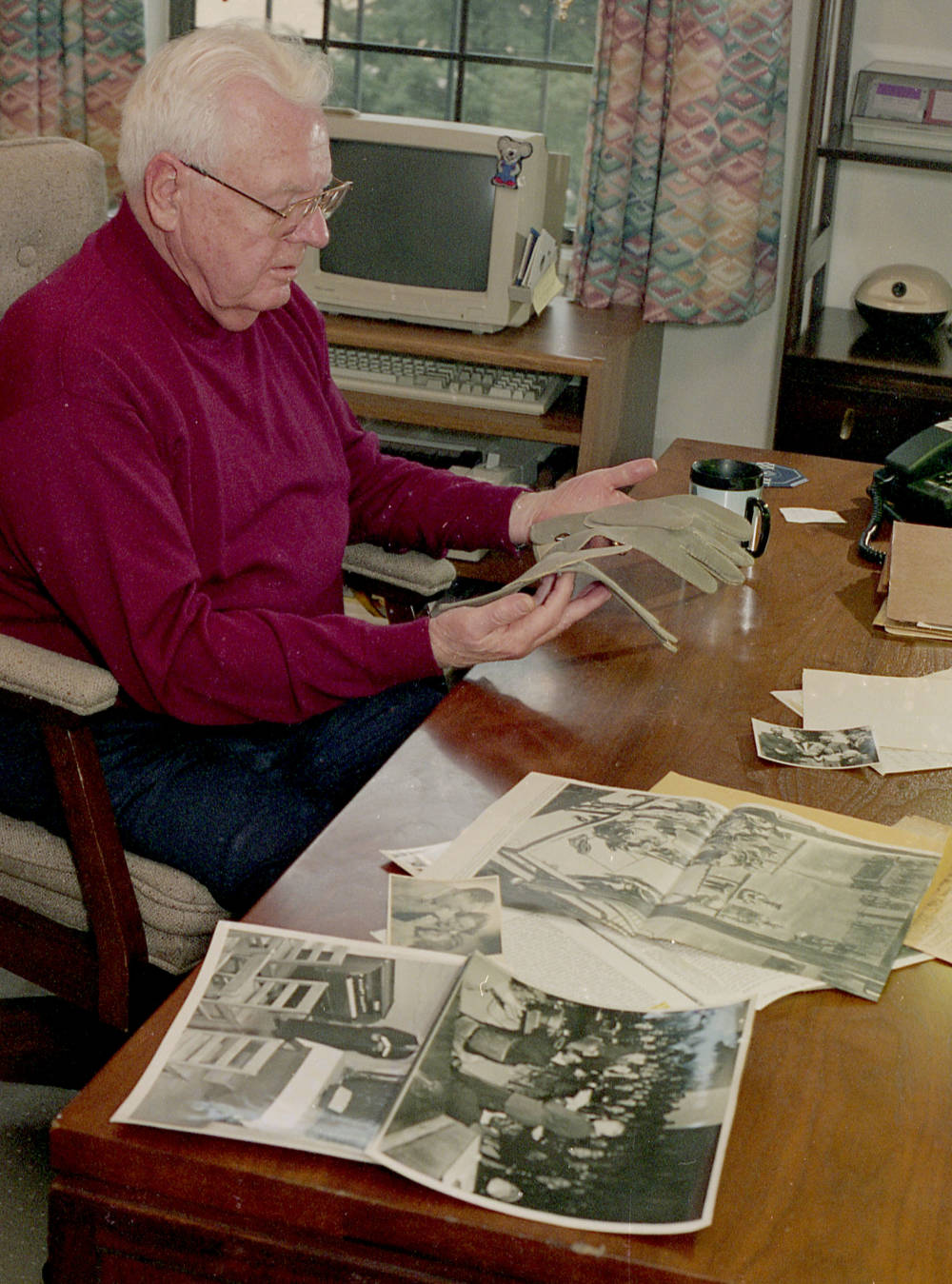 Henry H. Gerecke looking over mementos of his father, Henry F. Gerecke, who spent a year ministering to the 21 Nazi leaders during the Nuremberg war trials. This pair of gray, suede gloves were a gift of Hermann Goring. (Lou Peukert ~ Southeast Missourian archive)

CHAPLAIN FROM AREA MINISTERED TO NAZIS

Stripped of their military uniforms and locked in drab prison cells, they appeared to be just ordinary men.

But they were anything but ordinary. They were Germany's top Nazis, the world's most hated men.

Ministering to these men's souls was a tough task. But such was the mission that fell to the late Henry F. Gerecke, a U.S. Army chaplain who grew up on a Gordonville farm.

Gerecke, a Lutheran minister, and his assistant, a Catholic chaplain, spent a year ministering to the 21 Nazi leaders during the Nuremberg war trials. In the early morning hours of Oct. 16, 1946, they made 10 trips to the gallows, accompanying the 10 Nazi leaders who were hanged.

"He told me that it was the hardest thing he had ever done in his life," said Gerecke's son, Henry H. Gerecke of Cape Girardeau.

The younger Gerecke, who served as Cape's police chief from 1974-1981 and remains a resident, said that his father, who was philosophically opposed to capital punishment, had difficulty reconciling that belief with the execution of the Nazi leaders.

"There was always a sense of a degree of remorse about him as far as the trials," recalled Henry H. Gerecke. "Dad and the Catholic priest asked the tribunal authority not to cremate the bodies, that they be permitted to bury them."

The authorities denied the request. Instead, the bodies were cremated in the ovens of the former Dachau concentration camp so there would be no monument to the Nazis, said Gerecke.

The former police chief served in the military police during World War II.

During the end of the Nuremberg trials and the subsequent executions, Gerecke was hospitalized in Germany, the result of injuries sustained in a military-vehicle accident in July 1946.

"I saw dad twice in Nuremberg before I was injured. I was on my best behavior," remembered Gerecke.

"I had been chosen because I spoke German. I was Lutheran," recalled Henry F. Gerecke, the chaplain, in his written account of the experience. His words were published in the Sept. 1, 1951, edition of The Saturday Evening Post magazine. "I had spent more time in jail (having been director of prison work for the St. Louis City Mission) than any other preacher the Army had handy."

He had strong reservations about the Nuremberg assignment. He had seen the infamous Dachau concentration camp at the end of the war.

"I had plenty of excuses for bitterness toward them," Gerecke wrote. "I had been at Dachau concentration camp, where my hand, touching a wall, had been smeared with the human blood seeping through."

But Gerecke finally accepted the challenge.

His son now recalls that the chaplain never lost sight of why he was there. "His basic premise was that he wasn't there as a jailer or custodian. He was a spiritual adviser and that was it."

Gerecke ministered to the 15 Protestant defendants, although he also visited the six Catholic defendants during the Nuremberg trial.

Most of the Protestant defendants regularly attended religious services conducted by Gerecke in a tiny chapel in the prison.

After the trial and his return to civilian life, Henry F. Gerecke served as chaplain of the Menard Penitentiary in Chester, Ill., before his death at the age of 68.

Henry H. Gerecke said his father was so well-liked by the prisoners that the body was brought from the funeral home to the penitentiary so that the inmates could pay their respects.

Although it's been nearly a half-century since the end of the Nuremberg trial and more than three decades since his father's death, both events are never far from Henry H. Gerecke's mind. 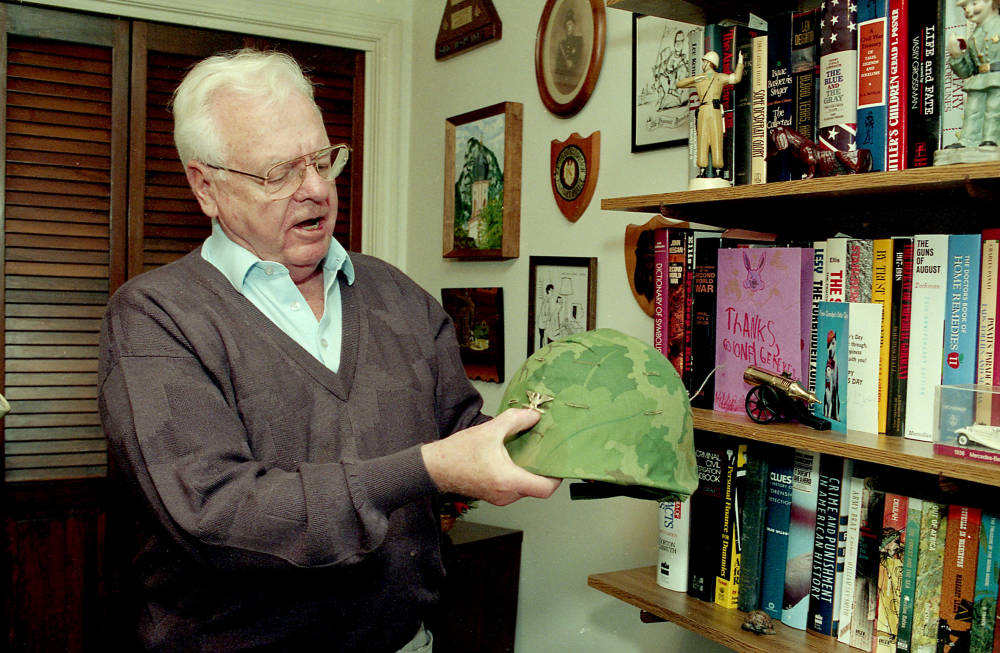 "I liked my father. I idolized him. He was my friend," said Gerecke, who bears a striking resemblance to his dad.

The study of Gerecke's Cape Girardeau home contains several books on the Nuremberg trial. One book, "The Cross and the Swastika," published in 1984, recounts the ministerial efforts of Gerecke's father in dealing with the Nazi leaders.

Gerecke has a pair of gray, suede gloves, which were Hermann Goring's. The Nazi leader gave them to Gerecke's father as a memento, and they were stored for years in a safe-deposit box.

"Goring wanted dad to give him holy communion, but dad wouldn't do it because Hermann wouldn't say he accepted Christ as his savior," Gerecke said.

Goring managed to escape the hangman's noose by committing suicide with a vial of potassium cyanide only hours before his scheduled execution.

Gerecke said his father was surprised by Goring's suicide. The elder Gerecke had become close to Goring's family and, in particular, Goring's young daughter, Edda.

Another memento Gerecke has kept hold of is a June 14, 1946, letter that was sent to his mother, Alma Gerecke, at her St. Louis home.

Written in German and signed by the 21 Nazi leaders, the letter beseeches her not to ask her husband to return home. Included with the letter is a typed, English translation provided by the military censors.

The defendants apparently were concerned because of rumors circulating that older officers in the U.S. military soon would be allowed to return home. Gerecke had been commissioned into the Army as a chaplain in 1943.

"Please consider that we cannot miss your husband now," the defendants wrote. "During the past months he has shown us uncompromising friendliness of such a kind that we cannot be without him in these surroundings in which -- but for him -- we find only prejudice, cold disdain or hatred....

"In this stage of the trial, it is impossible for any other man than him to break through the walls that have been built up around us; in a spiritual sense even stronger than in a material one. Therefore, please leave him with us."

Moved by the letter, Alma Gerecke cabled her husband to remain at Nuremberg, which he did.

The chaplain later wrote of the incident, "Hitler's strong boys, who had scourged Christianity and broken the Ten Commandments more than any scoundrels in history, were beseeching an American housewife for the spiritual counsel of the Lutheran Church, Missouri Synod."

Today, the Nuremberg trials to many Americans might seem a footnote in history. But in Germany, there are still strong Nazi sympathizers, said Henry H. Gerecke.

"If you go back there today, you are going to find a lot of sympathy for them."

Gerecke acknowledges that his family's roots go back to Germany, but he said his is a "love-hate relationship" with Germany today.