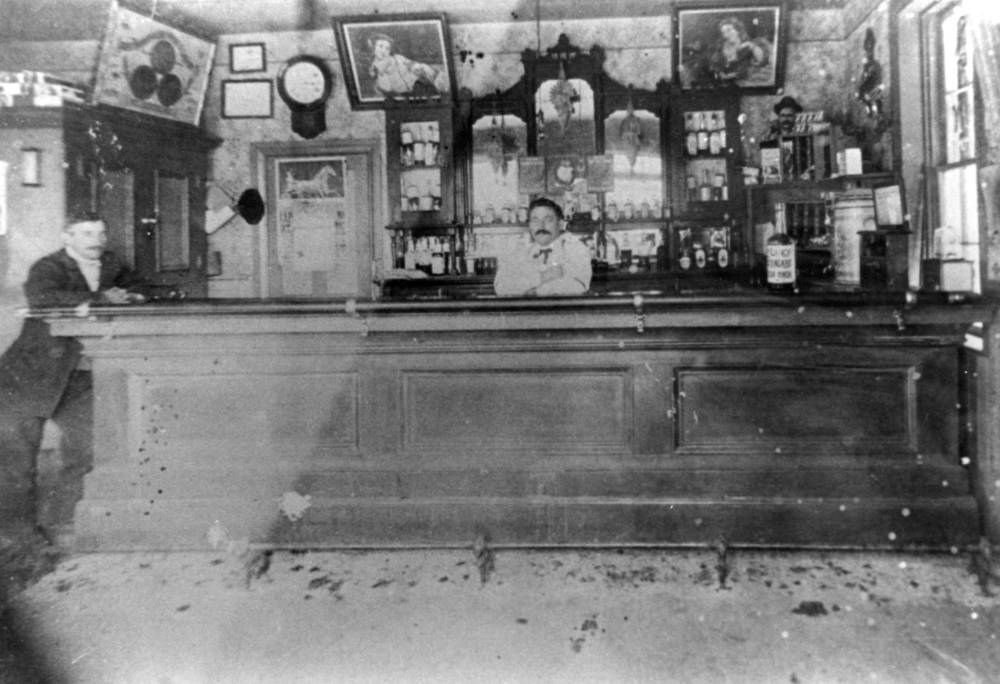 We're all familiar with the history of national Prohibition in the United States, how passage of the 18th Amendment ushered in a ban on the manufacture and sale of alcoholic beverages beginning Jan. 17, 1920. But even prior to that fateful day, Cape Girardeans were hard pressed to buy a drink at what had been familiar watering holes in the river city.

Congress passed the Wartime Prohibition Act Nov. 18, 1918, to save grain for the war effort. It went into effect June 30, 1919. But it seems the proprietors of the local saloons were practical folks. As their licenses came up for renewal in the first half of the year, they knew that wartime Prohibition would mean they would be paying for a six-month license that would be good for less than that amount of time. Some proprietors decided to close their establishments early.

The first to throw in the bar towel was the Broadway Saloon in May 1919. Soon, other establishments did the same. On and on it went until January 1920, when nationwide Prohibition went into effect.

In researching the "Out of the Past" column, I ran across a number of stories that told of our area's slow march toward legislated sobriety.

Published May 8, 1919, in the Southeast Missourian:

The Broadway saloon, owned by Huebel & Brunkhorst for more than 10 years, will close Saturday night, according to report. It is said that as the license will expire then the proprietors decided they would not run the risk for six months and then have to close at the end of two months. All saloons must close July 1, according to the federal war laws.

This will be the first saloon to close because of the final summons. The Broadway saloon has long been a popular place of the kind. It has occupied its present location for perhaps 20 years and has always been regarded as a very orderly place. Huebel & Brunkhorst are two young men who have made a financial success of the business and it is said they will soon engage in other lines of activity that will yield them as much revenue as the liquor business.

SALOON LOCATION FOR HALF CENTURY NOW BEAUTIFUL STORE OF WOMEN.

The Arcade saloon, which occupied the conspicuous corner at Main and Themis streets for more than half a century, closed up not long ago for a lack of patronage. A Main Street business man told The Missourian today that for more than 25 years he had been accustomed to seeing a crowd of loafers on that corner, no matter what time of day or night he looked out of his window. Hundreds of times did he see men reel from the door and stagger away. He says he saw men leave their poorly dressed wives and children standing on the walk by the hour while they went inside to drink and squander the money their dependents needed so badly. It was a common thing to see the police drag men from the place after they had become so drunk they couldn't stand up to the bar any longer and have them fined for spending their last cent in the place.

As late as 15 years ago leading Main Street business men congregated in the place to talk over important business affairs. It is said that one day as a group of men stood at the bar the idea of a new bank was conceived. The plans were worked out in the saloon, the bank was started, the officers and directors held more meetings in the saloon than in the bank, and finally the inevitable happened. Many a heart was broken in the crash.

Business men in those times thought it necessary to take their best customers to the Arcade for a treat. A Main Street banker boasted that he got his recreation by going to the Arcade each evening for his drink before going home. John Barleycorn landed a terrible blow on him and a more terrible one on his family.

Finally the light dawned. For the past 10 years no merchant would think of asking a customer to go with him to the place, and no merchant would for a moment want his customers to see him emerging from the saloon.

So the Arcade had to quit for a lack of patronage.

Today the corner is occupied by a clothing and shoe store, catering to the women and children. It looks like a flower garden sprung up from a dismal weed patch. This new place will bring happiness to all who enter and it will be a benefit to the community.

SHARON'S NOTE: The above article clearly shows the publishers' -- the Naeter Brothers -- anti-saloon leanings. Their negative feelings about alcohol may have given way to exaggerations about the conditions at the Arcade, as a quick search through the Missourian's electronic library doesn't show any other negative stories about the saloon.

Published June 6, 1919, in the Southeast Missourian:

HOFFMAN & LAIL SALOON WENT OUT OF BUSINESS AT MIDNIGHT.

JACKSON -- Last night at midnight the doors of the Hoffman & Lail saloon closed and this famous thirst emporium is no more after having been in existence about half a century.

In the days gone by this thirst parlor was among the best known places in the city. Among the guests have been many celebrities, senators, governors and congressmen having been entertained there. One reason for its popularity was the fact that the place was always conducted in an orderly manner, where no roughneck tactics were allowed. Another attraction was the neat and cleanly appearance of the place and the gentlemanly conduct of the proprietors.

It was at this place that often the brightest minds in this section would meet and, their wits sharpened by the effects of alcohol, would engage in repartee and pyrotechnics of brilliant wit. Here profound secrets of state have been discussed in confidence; here has been started many an important move in business, in politics, in civic life. Gems of oratory have been heard here from the lips of men whose names stand high on the list of prominence. The man down and out in life could pour out his troubles to sympathetic ears, and not infrequently receive financial aid; collectors for charitable institutions never failed to strike this place for a donation and almost invariably got it; subscription lists for any civic improvement in the city or the county never passed this door without entering for a tribute.

Now the only thirst parlor in the city is that of Sam Peterson, whose license continues until the first day of July, when presumably this oasis in the desert will also vanish and Jackson will be bone dry the first time in its history of more than a century.

ANOTHER OLD LANDMARK CLOSES NEXT MONDAY

On next Monday, June 16, the Haas saloon in Haarig will close its doors and another old landmark will go out of existence. This place has been inhabited by a saloon as far back as the younger generation can remember and many of the older citizens do not remember of anything but a saloon being operated in the building.

There have been reports that Joe Haas will remodel the building and turn the saloon into a soft drink parlor, and there is no doubt but that it would prove a very popular place.

The other two saloons in Haarig, the Gross & Ruh place and the Frenzel place, will remain open until the dry order goes into effect July 1.

As the time ticked down to zero hour for the cessation of liquor sales here, the crime rate apparently went up.

NEAR DROUGHT IS GIVING POLICE MUCH BUSINESS

With only one more week before the drought begins the users of wet goods are consuming large quantities of the liquids and the result is that the police court is kept busy assessing fines against the free imbibers.

Monday morning the police court handled four drunks and this morning three more were called before the judge to answer to charges of intoxication.

It was also reported that there were a large number of others imbibing freely Monday, but they kept straight enough to keep the police from rounding them up.

Last night one of the imbibers is said to have slugged a man on the levee front, but he made his getaway in the crowd around the show boat before police could locate him.

LID BLEW OFF IN CAPE SUNDAY

REPORTED THAT BOOZE WAS SOLD AND LAW WILL CUT NO FIGURE.

Metropolitan newspapers are now devoting much space to what is likely to happen the last day saloons are permitted to operate. Some reports say that saloonkeepers will pay no attention to the closing order, others say that some dealers will continue the sale of liquor until their stocks have been depleted and others say that no attention will be paid to the closing law on Sunday because noting serious can happen from violations at the last minute.

St. Louis police have bee notified to keep special watch on all saloons Sunday and to see that they close promptly at 1 a.m. the morning of July 1 and then remain closed.

It is said upon good authority that the lid blew off in Cape Girardeau last Sunday and that probably more whiskey was sold in the downtown district than on any one day in a year. It is reported that one man in particular peddled dozens of small bottles of whiskey and it is further alleged that it has been no trouble for "the boys" to buy beer on Sunday. It has been whispered about that the lid will be off Sunday in Cape Girardeau and that certain dealers will pay little attention to the law until their goods are disposed of.

Despite worries that some saloon operators would continue to sell intoxicants until they ran dry, that apparently was not the case in Cape Girardeau.

Published July 1, 1919, in the Southeast Missourian:

This morning some are open for the sale of near beer an d other soft drinks, while others are packing their stock away and are not doing business. It is reported that no intoxicating drinks are being sold in the city.