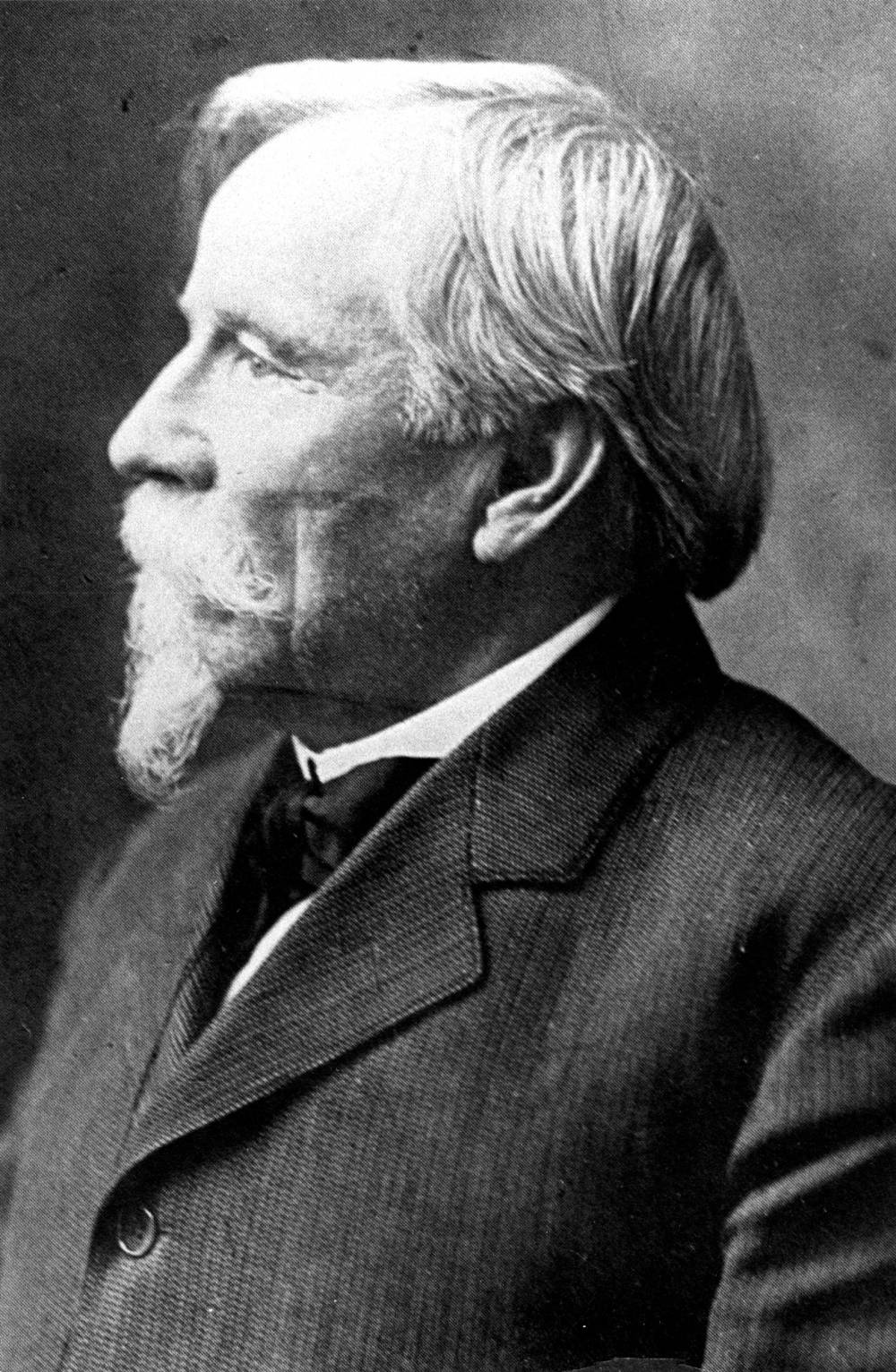 Attorney, railroad-builder, regent, author... The descriptions of Louis Houck could fill a whole blog. But in 1869, "newcomer" would describe the man who would become one of Cape Girardeau's most influential citizens. After an early life that included a stint as a printer, attorney Houck put down roots here 150 years ago this month.

Four years earlier, in the summer of 1865, Houck was offered a partnership in a the law office of H.K.S. O'Melveny at Cairo, Illinois. In his undated manuscript, "The Reminiscences of Louis Houck," he describes his journey from Belleville, Illinois, to Cairo, taking note of his first impression of Cape Girardeau:

"There was no railroad at that time from Belleville to Cairo, so I went down the river on the steamboat 'City of Cairo,' and on Aug. 1, 1865, first got a glimpse of Cape Girardeau, while the boat lay at the wharf for several hours and a good many hundred barrels of flour were rolled down the levee on the boat. It was a very hot day. Never had any idea then that I would ever live in Cape Girardeau. The town did not look very large. I remember (Old St. Vincent's) Catholic Church and noticed the part in front of St. Vincent's College, but have no other distinct recollection of the town. In noticed what I afterwards learned was the Ingram mill, standing at the upper end of town nearly where the waterworks plant now is."

Houck would return to St. Louis and practice law there before finally deciding the country life was more to his liking: "... (I) thought I could do better in the country. My first idea was to move to Camden, Arkansas, or somewhere in northern Texas, but Mr. (William) Hyde, who had attended a convention in Cape Girardeau and who thought that Southeast Missouri offered a good field, suggested that I open a law office in Southeast Missouri. I mentioned Bloomfield but he suggested Cape Girardeau and so I concluded to establish myself in Cape Girardeau." ("Reminiscences")

And so, on April 21, 1869, Houck came to Cape Girardeau. In celebration of the centennial of his arrival here, The Southeast Missourian printed his "Reminiscences" in 52 installments beginning on April 21, 1969. While all are interesting, I most enjoy his descriptions of post-Civil War Cape Girardeau. This excerpt was published in the Missourian April 30, 1969:

In April I accordingly removed from St. Louis, and on the 21st day of the month, 1869, landed at Cape Girardeau. As stated, I knew only one person who was a resident of Cape Girardeau before I came to town -- Mr. James E. Reilly who was a nephew of Sen. Daniel Reilly, already mentioned, and who owned a mill about a mile above Kaskaskia (Illinois) on the south side of the river. I did not know it then, but it was a place where during French times a mill had been operated by one Le Page. I wrote Mr. Reilly before I started that I intended to move to Cape Girardeau to practice law. He met me on the wharf and here introduced me to his particular friend, Leo Doyle, who at that time had a store next to his on Main Street. I stopped at the St. Charles Hotel then under the management of Mrs. Zalma Block. It was and had been the principal hotel of the town and all lower Southern Missouri for many years. I rented an office next to the hotel office and there established myself in Cape Girardeau.

The May 1, 1969, Missourian carried Houck's overall description of the town:

The attorneys of the town were George Green, who in the previous fall had been elected State Senator for the district, and Alexander Ross was his partner. Lewis Brown and Mr. Thomas Gilroy also practiced law; so too, a Mr. Sargent of Vermont, related to the celebrated Sargent family of that State. Mr. Robert L. Wilson had settled in the town a month or two previous and a short time after I settled in the town, James B. Dennis arrived and formed a partnership with Wilson. McWilliams was Judge of the Court of Common Pleas.

The town at that time had not more than 2,00 inhabitants. Main Street extended from Independence Street to what is now called Broadway but in those days was more properly called Jackson Street. These were the two principle streets of the town. The leading stores were located on Main Street which had brick sidewalks on both sides. Some brick walks were also constructed along Jackson Street as well as sidewalks out of flat sandstone flags. About half the lots along these streets were vacant. On Jackson Street at the corner of Middle Street, Col. George C. Thilenius operated a flour mill. Turner Hall, now called the opera house, had just been finished. On Spanish Street were partial sidewalks of sandstone flagging and brick sidewalks here and there as far as the College grounds on the east side of the street. No sidewalks on the west side at all. No sidewalks on the street between Independence and Broadway.

The streets named were partially macadamized with big stones bug Good Hope Street had a narrow macadamized roadway from Spanish Street to Sprigg Street and Sprigg Street had the same narrow macadamized roadway extending to Jackson Street. Otherwise no street or sidewalk improvements existed worth mentioning. On Sprigg Street were a few houses. The property facing that Street belonging to the McLain estate had been laid out into lots only a short time before. The German Catholic Church (St. Mary's) on the Corner of Sprigg and William Streets had just been completed. The brick building on the side opposite the Church at that time was occupied by a saloon. In the same block, a little further south, Charles A. Davis, a son of Greer W. Davis of Jackson, had a residence which was afterwards acquired by Lewis Brown. On the corner of Sprigg and Good Hope Streets was a large three-story ramshackle frame building and on the opposite side in the same building that is now there, a saloon flourished. Across Good Hope Street and opposite this saloon Mr. Nenninger had a general merchandise store and next to him Mr. Nussbaum opened a store. John Vogt ran a blacksmith shop on the street next to the saloon, but otherwise there was no building in the block along Good Hope Street. South of Frederick Street to Spanish Street a few little houses were scattered there and there as far as the Convent.

In next week's blog, we'll continue reminiscing with Mr. Houck about 1869 Broadway.

In the mean time, be sure to stop in at the Cape River Heritage Museum to see its new display on Louis Houck.