My great-grandmother was Katherine Bullinger Stehr of New Hamburg, Missouri. She had a sister, Clara, who was the housekeeper for the Rev. Martin Scherer, when he was pastor of St. Lawrence Catholic Church in New Hamburg.

Orphaned at a young age, my great-grandmother was raised in the parish rectory under the care of her sister and as a ward of Fr. Scherer.

At the age of 55, Clara Bullinger became the second wife of August Dohogne on Nov. 10, 1904, at St. Lawrence. By the end of the month, however, Clara was dead and buried in the New Hamburg cemetery, the victim of pneumonia. The Scott County Kicker newspaper noted her death in its December 3, 1904, edition: "FROM ORAN. Mrs. August Dohogne died Wednesday after an illness of about five days from pneumonial fever. She had been married only two weeks."

I was reminded of this tenuous connection to the Dohogne family when I found this story concerning the family's Belgium origins in The Southeast Missourian 100 years ago. 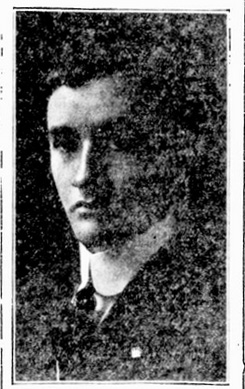 Leo Dohogne, cashier of the Farmers and Merchants Bank at Kelso, has received some interesting data from his brother, Cpl. B.J. Dohogne, regarding their father, Constant Joseph Dohogne, who was born in Belgium. The letters show how carefully birth records are kept in that country; that the registry of the birth of a child there, is as important as the registry of a pig in America.

"Well, folks, here I am in the land of 'Kultur' as it were. Have moved twice since I wrote you last.

"First of all I want to tell you what I found in Virton, Belgium. I was walking along through the cemetery when one of the boys with me called my attention to a tombstone with the following inscription: 'A la memoire de Mme. Dohogne nee Mie Irma Guiot decedee a Virton le 7 Janvier, 1888. Dans sa 29-me annee et de son infant Gabrielle Dohogne decedee le 31 Juillet 1887 a l'age' de 6 semaines. R.I.P.' This translated into English is, 'In memory of Mrs. Dohogne, born as May Irma Guiot, died at Virton, the 7th of January, 1888, in her 29th year, and of her son Gabrielle Dohogne, died July 31, 1887, at the age of 6 weeks. Rest in Peace.'

"The first thing I did was to go to the City Hall where I found that Mme. Dohogne was the wife of Jean Victor Dohogne a former resident of Virton. I also found that the Guiot people were living in Virton. I took one of our boys along as interpreter and went to see them. They referred me to a Mr. Delobbe, a lifelong friend of Jean V. Dohogne. I went to see him and he gave me J.V. Dohogne's address as 114 Rue Wantier, Laeken, Brussels, Belgium. He told me that J.V.D. formerly worked in Virton on the railroad and that he was now commissioner of the Belgian railroads. On account of the war, he had not heard from him for a long time. He said J.V.D. was remarried and told me to write him in English as he had a daughter well versed in English.. He also said the daughter was very pretty. He was not certain but thought J.V.D. was born around Francorchamp, where you know Father was born.. I have written to J.V.D. concerning relationship in which I gave him father's address. I also wrote to the city hall at Francorchamp to ascertain if any relatives of ours are there. If I hear favorably and I ever get a short vacation, I shall make it a point to visit Brussels if possible.

"We left Virton, Belgium, on Dec. 6, via trucks. Went through a good deal of the State of Luxembourg and went through Luxembourg City, which is a mighty pretty city of about 40,000 inhabitants. We arrived the same day in Grevenmacher, Luxembourg, about 8,000 population. The people of Luxembourg gave us the glad hand all along the line, though they speak German. They were surprised at the number of Americans and large amount of equipment coming through. They had been apparently living under the German delusion that there were only a few Americans over here. One old fellow told me that all they knew was what the German papers allowed to be printed. Luxembourg as you know is neutral. I picked up a Luxembourg City paper -- German -- and read an account of the Americans passing through. It spoke of the marvel and immensity of the equipment. It said it was a moving camp and the big trucks and guns shook the houses. The whole thing shows that German propaganda was one of their best weapons. One thing surely opens these people's eyes and that is the big rubber tires on our trucks. The Germans had very little rubber left. Their trucks had steel tires.

"We left Grevenmacher, Dec. 14, and arrived the same day here, Wittlich, Germany, about 5,000 population and a pretty good town. We are not allowed to mix socially with the people, but they are eager it seems to pal with Americans and run down the French and Gott Strafe England. At heart I suppose they hate us for they know we were the final cause of their downfall. They are going to do the same kind of sucking around the Americans at the peace conference, but no doubt they are wise to it. The German people here all hold that it was food that lost for them. You see it is the same old German spirit of not admitting when they are beaten.

"The food situation don't seem to be so bad with them as the stores seem well stocked and money can buy most anything. Wheat I guess is their big shortcoming. Their bread is black. I don't know what they make it of.

"As to going home, all we hear is rumors and most are favorable. Our major told us yesterday that we would be over here at least one month and probably four or five. I hope not the latter."

"Some tine ago I wrote you concerning cousins in Belgium. At that time I wrote to the City Hall at Francorchamp for a record of Father's birth. It took a good while, but I finally received a reply as follows.

Your father, Constant Joseph Dohogne, was born 29 July 1842 in Ster near Francorchamp (commune of Francorchamp) as you see in the following copy of our register of birth:

(The following paragraph was written in French and I had it translated.)

In the year 1842, 29 July before us, Marquet Son Burgomaster of the commune of Francorchamp has come Dohogne Decham John Joseph, farmer, aged 30, dwelling in Ster, this commune, who presented a child of the Masculine sex, born this day, 29 July at 9 o'clock in the morning in his dwelling, declaring of him his own, and of her, Dechamp, Marie Ann, his wife. (Housewife aged 30 dwelling with him) and to whom he declared to will give the christian names of Constant Joseph. The aforesaid declaration and presentation made in presence of Dohogne, John Pierre, aged 45 years, Jamar Henry, aged 21, farmers dwelling in Francorchamp. After having had reading of the present act the presented have signed with us.

(The following again was in English.)

You have also in our commune many cousins in the honorable families Dohogne, Dechamp and Jamar.

Felicitation and thanks for your service in the American expedition, who has delivered Belgium and mankind. America forever!

Yours,
Counson.
(for the secretary.)'

"As I told you I also wrote to Victor Dohogne, in Brussels, whose wife's tombstone I saw in Virton, Belgium. While writing this letter to you, I received a reply to the aforementioned letter as follows:

It is a very great and very agreeable astonishment to find a member of our family, a cousin perhaps, who is engaged in the American Expeditionary Army. Want I believe Mr. Delobbe has placed you in the right way.

Without any doubt the cradle of the whole family Dohogne are Ster and Francorchamp, and all those who are our relatives are native of these countries. Several members of the family have left these localities and are living now at Creppe (Spa), Hockay, Maulin, On Roy (Spa), Nivelles and Sanzinnes (near Houyet).

I know nothing about your father who had emigrated to the United States 20 years before I was born.

I advise you to continue your investigation at the Marie of Ster or Francorchamp and there you will be better informed.

I, also, I shall write to the other members of our family and try to find the relatives' degree which unites us.

But I will not lose the occasion to invite you to pass your next holidays among us in the capital.

My son, who learned at the University of Louvain, will be very happy to know his new cousin and very proud to have found him striking for the independence of Belgium, the native country of his father.

Waiting for you all the family tenders to you its regards and best wishes.

"This letter speaks for itself and no doubt will greatly interest father. I shall endeavor to investigate further and you can bet your life if given a chance I shall do a little visiting. However, to be candid my chances for the latter I think will be small. I have had no leave since in France, but one is due. But one is allowed to go only to areas designated for this particular organization, ours being Coblenz and up the Rhine, which is a mighty good trip."