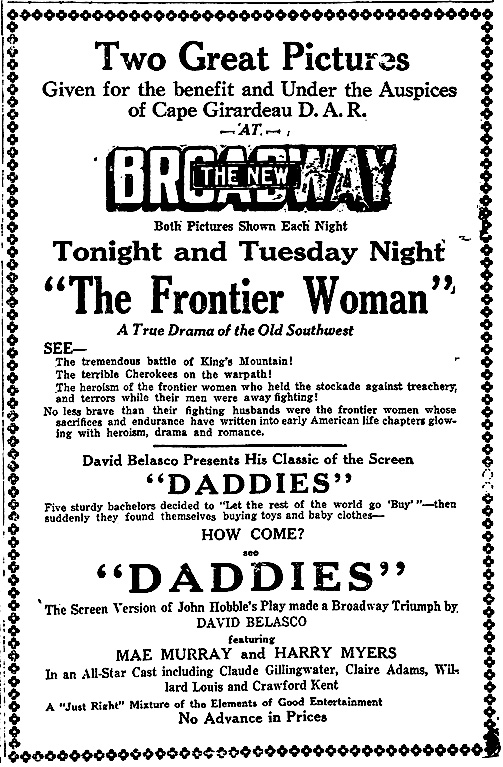 In the spring of 1924, the Nancy Hunter Chapter of the Daughters of the American Revolution organized a benefit at the New Broadway Theater: A two-night showing of the motion picture "The Frontier Woman." It was billed as "a true drama of the Old Southwest." Along with that movie, patrons also got to view "Daddies," the screen version of a play by John Hobble, starring Mae Murray and Harry Myers.

I'll admit, I've never heard of either film, but what caught my attention were the extras the ladies of the DAR and the Southeast Missourian threw in.

A window display in the Union Electric Light and Power Co. building, next door to the Broadway, featured antique utensils and tools loaned by the Daughters.

And for two days in the Missourian, the Daughters shared the true-life stories of their own Patriot ancestors.

This story announced the benefit and added attractions.

UTENSILS OF OUR ANCESTORS CONTRASTED WITH NEW IDEAS

In the display windows of the Union Electric Light and Power Co., the members of the local chapter of the Daughters of the American Revolution have a very interesting collection of utensils used by their ancestors. The display is being used to advertise the moving picture, "The Frontier Woman," to be shown next Monday and Tuesday at the New Broadway Theater, under the auspices of the DAR

In contrast to the simple instruments of domestic life shown in the display are the most modern adaptati0ns of the same articles. Besides a Virginia broom over 100 years old is the latest in electric vacuum sweeper. Next to a foot stove used by ancestors of Mrs. J.S. Kochtitzky when they went to "meeting" before stoves were installed in the church is an electrically-heated foot-warmer.

Old brass candle sconces owned by Mrs. Russell Dearmont are contrasted with elaborate electric lighting fixtures. Great-grandmother probably used the kettle suspended over the open fire, but her great-granddaughter is using an oven to cook her daily food.

The picture to be sponsored by the chapter is entitled "The Frontier Woman" and is one of the series of films called "The Chronicles of America." In addition to this picture a feature film that is highly recommended, "Daddies," is to be shown. The two should make an exceptional program and indications are that capacity crowds will see the pictures next Monday and Tuesday.

Below, and in subsequent blogs, I will reprint the Patriots' stories as written by their Daughters.

Girardeans Write of Early Experiences of Fore-Fathers in This County, Some of Which Have Prominent Places in Nation's History.

Under the auspices of the local chapter of the Daughters of the American Revolution, "The Frontier Woman," fifth of the series of historical pictures produced by the Yale University Press, will be presented as one of the attractions at the New Broadway Theater Monday and Tuesday. The other picture will be the widely-advertised offering, "Daddies." The DAR chapter has rented the theater for the two nights -- Monday and Tuesday.

A number of members of the DAR, prominent women of the district, have written sketches of incidents concerning their ancestors, in this country, which are printed below.

Nancy Hunter, in whose honor we have named our DAR Chapter, was of Scotch-Irish descent, her parents having emigrated from Antrim in the north of Ireland to America in the first half of the 18th century.

Nancy Hunter was born in Carlisle, Pennsylvania, to which place her parents had removed from Virginia. Her father, Capt. Joseph Hunter, was a wealthy land owner in Pennsylvania. Two bodies of land owned by him, viz., Cat-Fish Camp in Washington County, and the standing stone still retain these titles.

While he was in command at Fort Jefferson, his daughter, Nancy, rendered signal service to two forts (inhabited) by Indians, by bringing provisions to save not only the members of her own family, but others who were (who) were suffering for food. She went alone and fearlessly on these expeditions because soldiers could not be spared to run the risk. The arrows of the Indians cut her clothing, but she was uninjured. Her mother, a sister and a brother were killed by the Indians. Her eldest brother, James, was killed in the East during the Revolutionary War. Her brother, Joseph, served 3 months under Gen. Washington before coming west and serving under Gen. Clark.

This brother after the close of the war came to what is now Scott and New Madrid counties, and has many descendants.

Nancy Hunter was married in a fort in Kentucky by her father, Capt. Joseph Hunter, who was also a magistrate, to Israel Dodge, a descendant of Tristam Dodge, who was one of the original proprietors and settlers on Block Island and the Atlantic Coast in 1661.

The first child of this marriage was Henry Dodge, a famous Indian fighter and first governor of Ohio. The second marriage of Nancy Hunter was to Asall Linn, so of the noted Col. William Linn of Revolutionary fame -- also the son of this marriage, Dr. Lewis F. Linn, became noted in the annals of our state as the model senator fro Missouri.

Nancy Hunter and Israel Dodge came to Ste. Genevieve after their marriage. It is said of Nancy Hunter that she was a beautiful and attractive woman. Living in Bardstown, Kentucky, early known as a social, educational, political and legal center, she came in contact with the brightest legal and political minds of the West. Judge Rowan and Dr. Pope were her early friends as was the Hon. Felix Grundy of Tennessee, who in writing of her, said, "I esteem her as one of the most rarely gifted and wonderful ladies I ever met."

This admirable and courageous lady did not live to see an event unknown to the history of any family in our country both of her sons and one of her grandsons, senators of the U.S. Senate at periods nearly simultaneous.

His son, George Henderson, later came to Cape Girardeau and built the house (since destroyed) at the corner of Bellevue and Middle streets, known until recently as the oldest house in Cape Girardeau. It was built in 1807.

Spain fully realized the necessity of military protection for the Colonies. New Madrid being the largest settlement between St. Louis and New Orleans, and built on a large plateau, was deemed the most desirable location for a fort.

At the close of a long hot day in July 1789, (just two years later than the arrival of the first men at New Madrid) the quiet monotonous life of the inhabitants was disturbed by the strains of martial music; rushing to the river front they saw, to their astonishment, a gaily decorated flotilla of a half-dozen pirogues, bearing the Spanish troops under the command of Lt. Pierre Forcher, sent up from New Orleans by Gov. Miro, and in accordance with orders from Spain. The colonists received them with open arms, knowing what protection they would be to them. Lt. Forcher proved himself a wise and sympathetic leader in both civil and military affairs.

From an existence totally devoid of pleasure or amusements and entirely given over to the fur trading, to one of social gaiety, was a sudden transformation for the settlers, but none the less welcome. The soldiers and their wives had brought with them the usages and customs of their pleasure-loving Fatherland. The days were spent in hunting, trading, clearing, and tilling of the soil, but the nights were given over to feasting and dancing at the barracks.

The Spanish dons in powdered wigs, red velvet coats, white linen shirts with tucked and puffed bosoms, stocks that rivaled in height those that our ladies wore a few years ago, white knee trousers, white or red hose, low-cut shoes with large brass buckles; the beautiful dark-eyed senoras and senoritas, with high-powdered coiffures, with their gorgeous gowns with court trains, dancing the stately minuet, forms a vivid mental picture that has been handed down from generation to generation with added charm as the chasm of years grows broader.

Don Jean Baptiste La Valle went to New Orleans in 1795. Little is known of his life prior to the time when he was commandant of the post at New Madrid, which position he held until the transfer of Louisiana to the United States in March 1804.

The first blow to the prosperity and rapid growth of New Madrid was the removal of the troops after the transfer of the territory to the United States. That however was insignificant compared to the awful destitution wrought by the earthquakes seven years later. Only two families remained during this trying period, but many returned in after years and began life anew.

Mrs. Elizabeth Bryan, daughter of a Mr. Reese, one of the earliest settlers, is famed for having written the only authentic account of the earthquakes of 1811-1812.