Anyone keeping up with the news of the day knows that Cape Girardeau will play host to President Donald Trump on Thursday at the Show Me Center.

Trump will be the fourth chief executive to visit our fair city while a still in office. The others were William Howard Taft in 1909, Ronald Reagan in 1988 and Bill Clinton in 1996. While Clinton spoke to a massive crowd at Capaha Park, Reagan and Taft both chose to speak at what is now Southeast Missouri State University -- Reagan at the Show Me Center and Taft on the steps of Academic Hall.

On the occasion of the 100th anniversary of Taft's visit, Southeast Missourian staff writer Rudi Keller wrote an excellent article describing that event. It seems appropriate, given this week's activities, to share it with our readers once more. 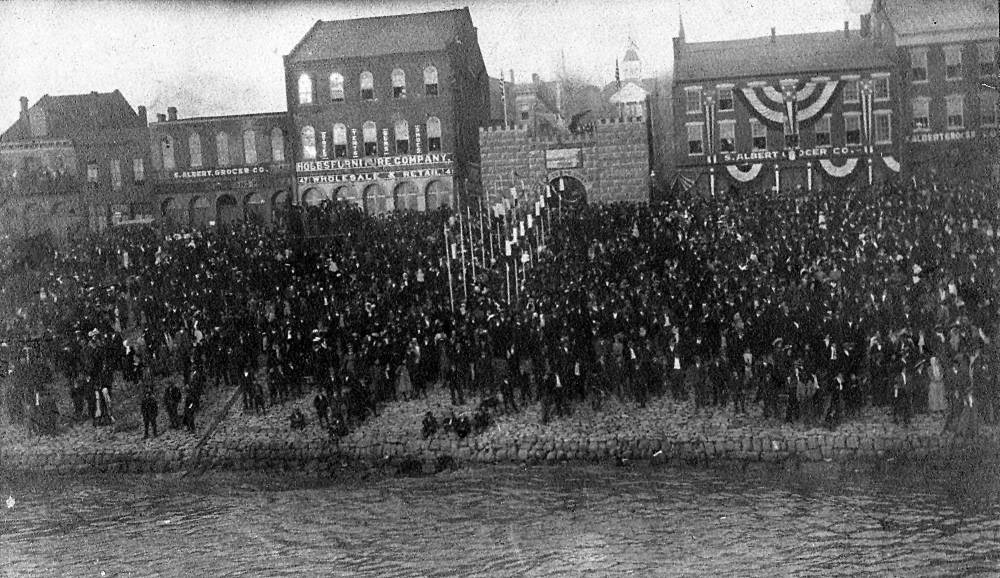 At 4 a.m. on the morning of Oct. 26, 1909, every telephone in Cape Girardeau started ringing. It was the signal that President William Howard Taft was nearing the city at the head of a massive Mississippi River flotilla for the first -- and so far only -- visit to the city by a sitting president for purely official business.

"Executive Committee Planning for the Greatest of All Days" was how the Daily Republican, now the Southeast Missourian, described preparations for the visit in a headline printed 10 days before Taft's arrival. County sheriffs would ride horses provided by the Miller Brothers 101 Ranch wild west show -- also in town at that time -- and act as bodyguards.

One thousand special badges were printed for VIPs and the presidential party. Special stationary was printed and sold, with businesses encouraged to write their correspondence on the commemorative paper. Special trains were arranged to carry thousands of visitors into and out of the city.

Automobiles -- including six provided through A.J. Vogel's recently acquired Ford agency -- were enlisted for the presidential motorcade from the wharf to Academic Hall at the Southeast Missouri Normal School, now Southeast Missouri State University, where Taft delivered a 20-minute speech and planted an elm tree.

Schools throughout the region were closed. Throngs lined the riverfront, found perches on the roofs of downtown buildings and took up seats at Academic Hall for the speech.

And for many years afterwards, Oct. 26 was celebrated as President's Day by local proclamations.

Taft wasn't alone on his trip. He was accompanied by Vice President James S. Sherman, 177 members of Congress, several governors and numerous local dignitaries and business leaders from the Mississippi River valley. The presidential river tour was sponsored by the Lakes-to-Gulf Deep Waterway Association, organized to lobby Congress to appropriate money to develop and maintain a 9-foot navigation channel on the Mississippi River.

"Probably no other city of this size was ever called upon to act the host to so great a gathering of national characters," the Daily Republican reported the day after the visit.

Taft didn't tarry here long -- he stepped off the steamboat Oleander at 6 a.m. and was back on board by 7 a.m.

At the center of it all was Edward "Big Ed" Regenhardt, construction contractor and quarry owner, who was a personal friend of Taft. Regenhardt was named chairman of the executive committee organizing the trip "and was generally understood to be responsible for whatever had been done in the way of getting the President to stop off in this city on his way down the river," the Daily Republican reported on Aug. 16, 1909.

Regenhardt's ties to Taft, along with mementos of the trip and postcards depicting the arrival and departure, are available on a website created by his great-grandson, Robert Lewis of San Antonio. Regenhardt, who stood 6-foot-5-inches tall, was described by Taft as "the Lighthouse of the Mississippi."

The website www.robs genealogy.com also displays the official press guide to the river tour, discovered by Lewis in a closet after his grandmother's death. "I was quite amazed to see those and put some of the stories together," Lewis said last week. "It was quite a fortunate find, and I am impressed that somebody kept those all these years."

The find brought Edward Regenhardt's role into focus, Lewis said. "I had heard that he was involved with Taft's coming to Cape Girardeau but I didn't know to what extent," he said. "I had heard general allusions to the fact that he and my great-grandfather were friends."

Taft's river tour began in St. Louis, where he arrived by train from Arkansas. He was on a 13,000-mile national tour, headed to New Orleans where he would, in general terms, endorse the waterway association's goals.

"It was the biggest flotilla of prominent politicians perhaps in American history," said Dr. Frank Nickell, director of the Center for Regional History at the university.

The visit also recognized the increasing importance of the rapidly growing river town. Cape Girardeau's population grew by 76 percent, to 8,475, from 1900 to 1910. Just a few years before Taft visited, President Theodore Roosevelt passed the city at 3 a.m. while he was on a river trip on his way to Cairo, Ill., which was almost twice as large as Cape Girardeau at the time.

"Cairo was the city in the region," Nickell said. "Cairo had the hospitals, the businesses, and it was just a much bigger city. It was more active and had a lot of resources. The schedule" for Roosevelt "was so tight and Cape simply resented it."

At that time, the president was an isolated figure. Roosevelt was the first to undertake national speaking tours. No mass communications, other than newspapers, existed to bring the president's image or voice to a wide audience. Silent movies and audio recordings on wax exist from the era, but were seen or heard by only a tiny fraction of the public.

"It was a very large event for the people of Cape Girardeau," Nickell said. "It was the first time that the people of this small community, this tiny little river town, had seen the president and all these Congressmen. It gave the city a sense of pride, a sense of identity."

Nickell remembers taking an oral history from two women who were on hand as young girls and one described how a young girl fell off a roof to her death, but he could find no mention of it in news accounts.

Nickell searched Taft's printed papers, he said, for any mention of Cape Girardeau or the president's impressions of the city and found nothing. There are no known pictures of Taft in the city. No transcript of his remarks in the city is known to exist, he said.

The events at Academic Hall included the presentation of "a monster bouquet of American Beauty roses" by six schoolgirls led by Ruth Glenn, the Daily Republican reported. Coenia May Schode, 14 months old, smiled at the president on the riverfront and he shook her hand.

Taft's second stop of the day was in Cairo. Regenhardt was there as well, having joined the trip to New Orleans with several other Cape Girardeau residents, and the Daily Republican reported that as Taft waited to speak, he saw "Big Ed" and commented on a basket of apples he had been given as he departed, "and he declared them to be the finest he had ever tasted. They were grown by that stalwart republican, Herman Siemers, who now has the distinction of presenting the president with a present that brought him much pleasure."

The apples were grown in an orchard located just south of where the Drury Suites now stands, said Earl Siemers, grandson of Herman Siemers. The orchard was destroyed in a 1948 tornado. While Earl Siemers had never heard the story of the apples for Taft, he said they were probably winesaps, a late-maturing variety.

"I picked many a bushel and pruned many a tree in that orchard," he said.