William Ezra Parlow, who went by "W.E.," isn't the most well known of Cape Girardeau's architects. Perhaps that's because he was only a resident of our fair river town for such a short time. He opened a solo office in the First National Bank building on Main Street in September 1913 and continued his labors here until his death in the summer of 1920.

But in those seven years in Cape Girardeau, Parlow designed several impressive buildings:

Half of those structures remain, while half have been razed.

One major Parlow work that is still standing wasn't even built in Cape Girardeau: The Russell Hotel in Charleston, Missouri. 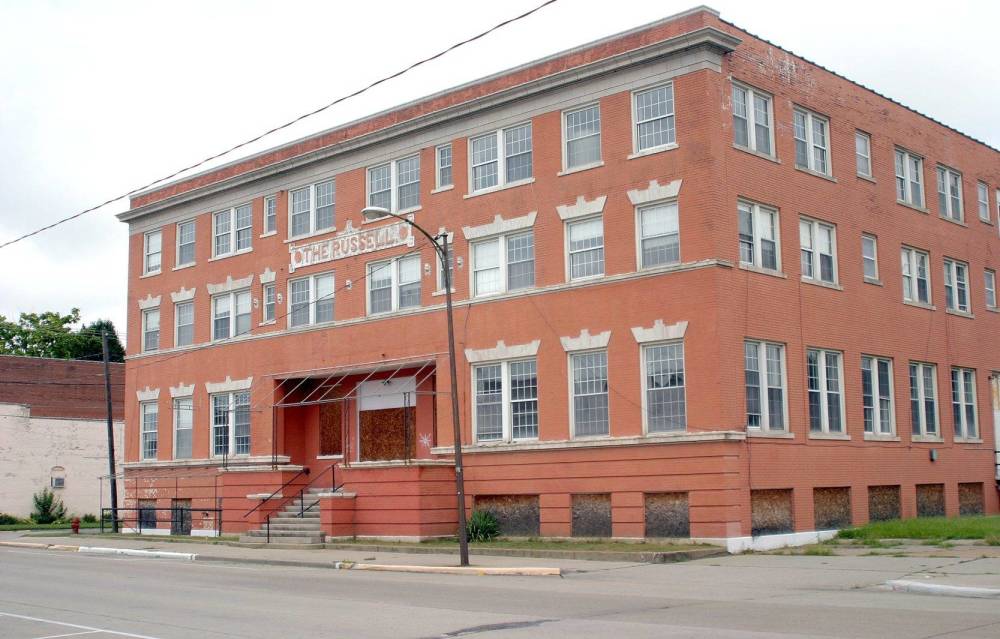 The Russell Hotel is located in downtown Charleston. This photo was taken in August 2015. (Scott Welton ~ Standard Democrat)

The Russell stands vacant and was placed on a "watched list" of Missouri's Places in Peril in 2015 by the Missouri Alliance for Historic Preservation, where it remains. But in August 1918, the hotel opened to quite a lot of fanfare. As it was designed by Cape Girardeau architect Parlow, the opening of the Russell even prompted a large article in The Southeast Missourian.

When the doors of the Russell Hotel are opened to the public for the first time Sunday morning,, Charleston can claim, without fear of contradiction, the title to the finest hostelry in Southeast Missouri.

The new building, erected by Congressman Joe J. Russell, after whom it is named, cost, with all furnishings and fixtures, approximately $125,000, a figure which gives some idea of what the traveler may expect in the way of perfection so far as building and furnishings are concerned, and it is assured that the new Russell will not be a disappointment, but rather a remarkable example of the judicious expenditure of the large sum named solely for the purpose of providing every convenience and every service for those who will be its guests.

The idea of erecting a new hotel in Charleston was suggested at a banquet held in this city in 1916, at which banquet Congressman Russell was a guest.

It is said that at the banquet some one remarked that he would like to see a fine hotel erected in this city, and Congressman Russell, or "Uncle Joe," as all Charlestonians prefer to call their beloved Representative, at once made the proposition that he would build Charleston a hotel if some of those interested in the materialization of the project would purchase a suitable site, retaining the amount of their investment in stock.

This proposition was immediately accepted and within 24 hours such a company was formed, and with $8,000 subscribed, purchased the lot owned by Ostner & Pond at First and Commercial streets.

Plans for the new hotel which was to cost in the neighborhood of $60,000 were begun immediately, and from the work of several architects "Uncle Joe" accepted those of W.E. Parlow of Cape Girardeau. George H. Gassman, local contractor, was awarded the contract and work was begun within just a few weeks after the idea of a new hotel was first suggested.

Progress in the erection of the building has been very rapid, but for delays in painting, plumbing and electrical installation, the building would have been opened much sooner.

The opening at this time, however, will not be the formal dedication of the building, owing to the illness of Congressman Russell, but it was decided to forego the formal exercises pending his recovery and open the hotel to the public, and later one, when he is able to return home to view the completed structure for the first time, the dedication, with Speaker Champ Clark as guest of honor, will be held.

The Russell Hotel building is four stories in height, including basement, is constructed of stone, gray pressed brick and steel and is fire-proof throughout, Only the doors and window casements are of wood.

The entrance to the basement from the street is through the stairs directly at the southwest corner of the building. A wide vestibule opens to the stairway and on the right is a large billiard room -- not yet in operation -- which occupies all the space under the dining room and lobby.

To the left a barber shop is being fitted up and will be opened soon under the management of Charles Stanfel, owner of the shop o Main Street, in the Russell building.

In the basement are two large servants' rooms, toilets and washrooms, a commissary, the furnace rooms and coal bunkers.

A feature of the commissary is the large built-in concrete ice box with coiled pipes at the bottom, which will cool the water supplied to the dining room and to the lobby of the hotel.

A stairway leads from the basement to the serving rooms between the kitchen and dining room.

The main entrance to the building is on Commercial Street, up a flight of stone steps and through an ornamental porch.

Lighting fixtures of a late type diffuse the light over the luxurious mahogany chairs and surroundings in soft mellow tones that are pleasing and restful.

Each of the guest rooms is furnished with massive brass bed, dull mahogany dresser, rocker, chair, grip stand and costumer, all of good quality.

Special attention was given to the selection of the springs and mattresses, which are the best money could buy.

To the right of the main entrance are cigar and news stand, the hat racks and the entrance to the dining room. To the left are the main stairway of steel and marble, the writing room, a ladies' waiting nook and two large sample rooms in the rear of the building on the ground floor.

The clerk's desk of marble, the manager's office, partitioned off in glass, the hotel telephone exchange, which will connect every room in the hotel with the Bell telephone system and the long distance telephone booth, occupy the back or north end of the lobby.

he dining room is finished in the same manner as the lobby and like the remainder of the building, has large bronzed radiators, indirect lighting and beautiful draperies in keeping with the finish.

It contains 12 tables, all of mahogany, each with a serving table, but can accommodate as many more when the occasion demands.

The room occupies almost the entire east half of the building fronting on Commercial Street, with double windows along the east side.

Adjoining the dining room in the rear is the servicing room, equipped with coffee urn, ice water fountain and dish-washing facilities.

To the right is a room being fitted up as a beauty parlor, and to the left is the kitchen, equipped with a steam table, broiler and stove, with all the latest time-saving essentials demanded by the largest hotels.

A smaller storeroom with ice box for milk and butter adjoins the kitchen on the north.

From the serving room a stairway leads to the rear of the building.

The third and fourth floors with bedrooms, parlors and linen rooms and toilet rooms, are so designed that all rooms are "outside," thus insuring the maximum comfort of the guests.

There are 42 guest rooms in all, each equipped with wash-basins, mirrored medicine cabinets, telephones, fan connections and all modern furnishing.

Half of the rooms are equipped with private bath facilities.

In the arrangement several rooms on each floor are arranged in suites, so that as many as four rooms can be used in connection if it is desired.

The parlors on the third floor are just a few feet from the main stairway and front on Commercial Street.

Throughout each floor are evidences of the care that has been taken to provide for the guest's convenience and comfort in a way not surpassed by the best hotels in the leading cities.

J.E. Fenwick, who was chosen by Congressman Russell to manage the new hotel, will endeavor to place the Russell at the head of the list of modern Southeast Missouri hotels.

He was for four years head clerk at the Idan-ha (Hotel) in Cape Girardeau and also served in a like capacity in the leading Perryville hotel.

He spent several months in the earlier part of the year at the Stattler in St. Louis, where he secured valuable information in regard to the modern system of hotel management.

Missourian files indicate the Russell Hotel was one of the last major structures Parlow worked on before his unexpected death on July 2, 1920, at Morehouse, Missouri. As noted above, Parlow drew plans for a new Frisco passenger station here in 1917, but the Frisco objected to his work and had its own architect, R.C. Stephens consult with Parlow on the them. Frisco and the city of Cape Girardeau battled over the depot for a long time, and it wasn't completed until 1921.

While Parlow is most noted for his commercial buildings, he also designed residences, including what was described in The Southeast Missourian as a "magnificent home" in Charleston for "lumber capitalist I.L. Byrd" in 1919.

William Ezra Parlow's obituary in the Cape Girardeau newspaper noted that he was born on a farm near Jackson, Tennesse, on July 21, 1869, the son of Dr. William Henry and Nancy Elizabeth Gregory Parlow. He married Winnie Ella Puckett in Tennessee in 1888, and they had four children: Maude M., Gracie M., Clyde G., and Clarence B.

In his early professional life, W.E. Parlow was a contractor, it was only later that he "took up architecture, learning by hard work and observation, and for 15 years has followed that profession." In addition to the buildings mentioned above, his obituary also says Parlow designed an addition to the Idan-Ha Hotel, "the first piece of architecture that he completed" here, and Rigdon Laundry.