Frank Unnerstall at the reins 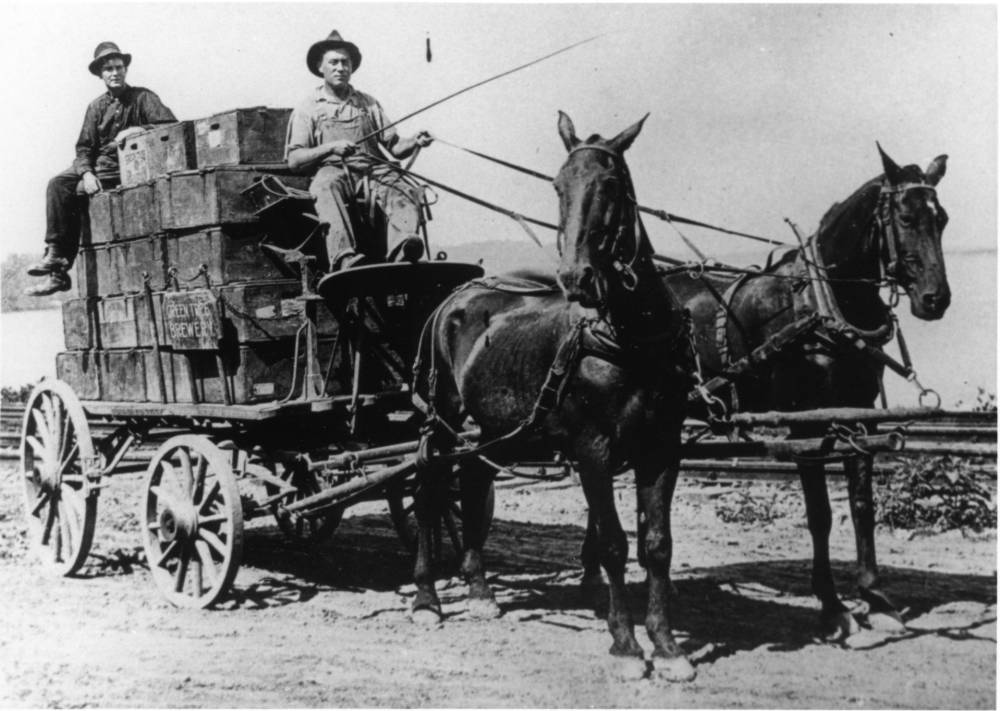 The recent visit of the world-renowned Budweiser Clydesdales reminded me that this newspaper houses a photograph, taken about 1910, of a beer wagon at Cape Girardeau's riverfront. While the horses pulling the wagon aren't Clydesdales, and there's only two of them, it's still one of my favorite images in the Missourian morgue.

At the reins of the Green Tree Brewery beer wagon is Frank Unnerstall. The fellow in the back "holding down" the crates of beer isn't identified. The photograph came to us courtesy of Tom Hopen.

A Green Tree Saloon operated on Good Hope Street in the early 1900s, but was shut down in September 1918, when the Cape Girardeau County Court revoked the license of the business's operator, Adam Cox. A month earlier, Cape Girardeau Mayor H.H. Haas ordered the place shuttered, after learning Cox's 17-year-old daughter had been acting as bartender and serving patrons drinks.

Our clippings don't say when the local Green Tree Brewery shut down, but it may have been a victim of nationwide Prohibition in 1920.

Unnerstall was a native of Germany and died in Cape Girardeau in 1913. His obituary was published in The Daily Republican on the day of his death, Nov. 5.

FUNERAL WILL BE HELD FRIDAY MORNING -- CAME TO CAPE EARLY FROM GERMANY.

Frank P. Unnerstall, for many years a well known citizen of the Cape, passed away today, 20 minutes before noon.

Mr. Unnerstall had been sick for about four weeks and two weeks ago became bedfast. He had some kind of trouble with his feet which developed into blood poison, from which his death resulted.

Mr. Unnerstall was born in Germany, and at Hanover, according to the best recollection of his family, and was 73 years of age Aug. 4. He, in company with a brother, came to this city when he was 18 years of age. Sometime later his father, Matthew Unnerstall, immigrated to this country.

Mr. Unnerstall was one of the first to volunteer to fight for the land of his adoption and went into the war of the rebellion soon after war broke out. He was a member of Company C, of the second regiment of Missouri Infantry. He was under Thomas and Sherman and took part in the battles of Perryville, Stone River, Missionary Ridge, Chickamauga and others. He served over three years.

Mr. Unnerstall has been councilman at different times in the past. For something like 28 years he was the Cape Girardeau of the Green Tree Brewery of St. Louis.

The funeral services will take place at St. Mary's Church at 9 o'clock Friday morning. The family had not decided this afternoon just where interment would take place. It will be announced tomorrow.

Curiously, the obituary doesn't mention a daughter, Emelia "Emma" Unnerstall Gosche, who preceded Frank Unnerstall in death in 1906. She was buried at Old Lorimier Cemetery, while her father was interred at St. Mary's Cemetery.