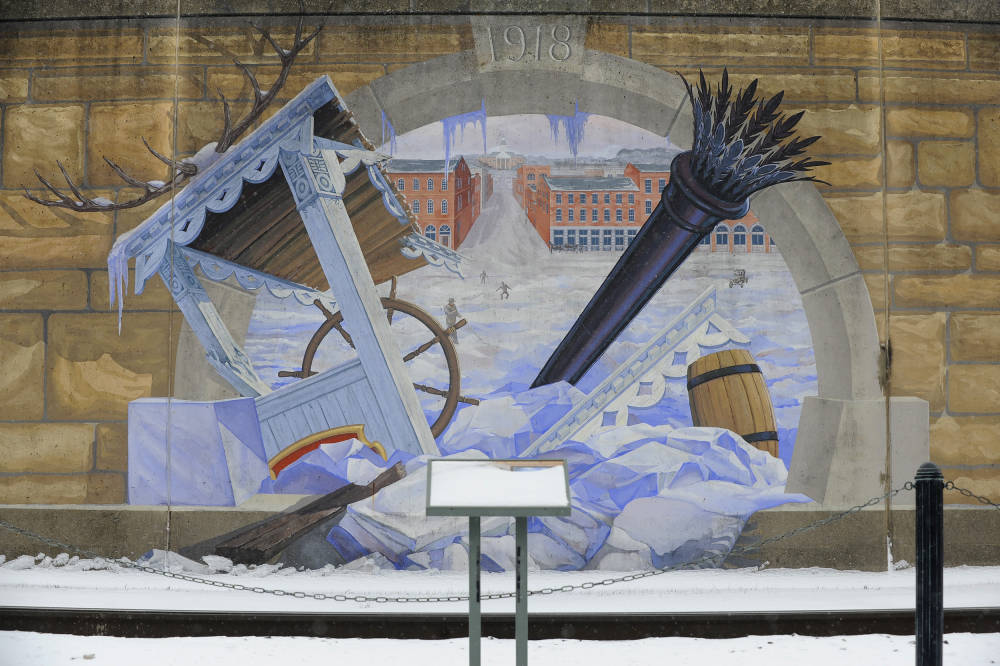 For many years -- at least until the Blizzard of '79 -- the winter of 1917-18 was the tape measure to which all winters in Southeast Missouri were compared.

Along with a 21-inch blizzard in December 1917 and a total of 35.7 inches of snow received in January 1918, the residents of Cape Girardeau contended with days-on-end of sub-zero weather and a lack of drinking water when the ice-covered Mississippi River froze the city's water intake pipe. That was coupled with a coal famine and coal rationing. What little coal the city did have was of an inferior quality, which caused problems with the city's gas supply and electricity.

There were problems, too, with transportation. Street cars and trains had trouble operating in the large accumulations of snow. People couldn't get to where they needed to be, nor could the mail. In fact, for a brief time, Cape Girardeau County was isolated, after ice on the river and in drainage ditches shoved bridges off their foundations south of Cape Girardeau.

Ice also wreaked havoc on Jan. 29 on the Eagle Packet Co. of St. Louis, which did extensive business in Cape Girardeau. The company lost four of its steamboats to the crushing ice at Paducah, Kentucky. The first reports were vague: "A dozen or more steamers were carried into the Ohio River this morning when the ice gorge at the mouth of the Tennessee River broke. Boats and barges were swept from the moorings at Paducah, Kentucky, by the wreckage which has been passing all day."

The next day, the Cape Girardeau Daily Republican named it "the greatest damage to shipping ever known in this section..." But still, the details weren't known until Feb. 1, when the front page of the Cape Girardeau newspaper carried photographs of four Eagle steamers lost to the ice: The Peoria, the Spread Eagle, the Grey Eagle and the Alton. The only boats the company retained were the Piasa, then in the harbor at St. Louis, and the Bald Eagle, which was on the ways at Paducah.

A Feb. 4, 1918, article in The Republican told of the demise of the boats, as witnessed by Capt. William "Buck" Leyhe, one of the owners of the Eagle company.

Big Officer Remained on Eagle to Last -- Will Be on Old Job As Usual.

Capt. Buck Leyhe, who was at Paducah when the fleet of Eagle boats was lost in the ice, has returned to St. Louis to aid in working out a scheme to resume business when conditions permit.

It is said that Captain Buck had the most eventful time of his life during the ice jam at Paducah. For fear something of the kind might happen, he had remained on the boats constantly and had each boat manned for prompt action.

When the ice in the Ohio began to swell on account of the rising water, it is said that he took the Peoria, which had a steel plate around the hull in front of the boat, and plowed through the ice, clearing it out for a distance of several miles. He figured that this would clear the river of the jam and thus save the boats.

When the ice began to move heavily, he had each boat steamed for service. At the critical time he went from the Peoria to the Grey Eagle, the big excursion boat, and was on her when the crash came.

The Eagle had the largest bell on the river. When the ice struck her, she tilted to one side and then to the other, and each time the great bell tolled. Crowds were on the river bank watching, and as the Eagle made her final plunge, the bell gave one heavy strike that could be heard many miles.

Captain Buck remained on the boat to the last and just before she disappeared under the great mass of ice, he jumped to the bank, being the last man to leave her. It is said that in his excitement he missed the distance and fell heavily to the frozen ground, injuring himself severely.

As the boats were knocked about by the great masses of ice the bell on each struck occasionally, which gave the scene the aspect of a funeral.

With only two small boats left, it is said the Leyhes (brothers William "Buck" and Henry) have lost their entire fortune and ... they must start business anew. The Bald Eagle, which was on the ways receiving attention, was saved and will be put in service between St. Louis and Commerce (Missouri) as soon as the weather will permit. Captain Buck will be in charge of her as usual.

It is also reported that the Leyhes have an option on a new boat that was built at the same time as the Peoria and which is much like her. They may buy her within the next week or so.

The Leyhes had mechanics employed on all their boats at Paducah at the time of the crash, and it is said they had spent nearly $50,000 on improvements and repairs. They had expected the best year's business of their career and were getting their boats in the best possible condition.

It has been reported that they Leyhes have considered buying the Streckfuss fleet of boats which have long been used on the river north of St. Louis, but this is contradicted. It is said that these boats have been in service too long and are not suited to the needs of the Eagle Packet Company.

In Roy L. Barkhau's booklet, "A History of the Eagle Packet Company," c. 1951, Barkhau remarked on the winter of 1917-18 and the devastation in wrought on the Leyhes' company: "There has never been recorded a winter as severe as that of 1917-1918. The Ohio River froze over, likewise the lower reaches of the Tennessee. When the break-up came in the spring and the ice of the Ohio began to move, it took out the ice in the mouth of the Tennessee and with it practically all the floating equipment tied up there for protection. The four boats of the Eagle Packet Company were a total loss, ground to bits in the devastating ice floes. There was insurance on only one of them, the Peoria. This was the greatest devastation ever to befall the company."

Following a 15-inch blizzard in January 1978, the Southeast Missourian printed an article that enumerated the harsh realities of the winter of 1917-18 for comparison.

The blizzard of 1917 was one for the city's history books. As one area farmer bluntly put it -- some years later, "I ain't been thawed out since."

Approximately 15 inches of snow was on the ground here today, and on Dec. 8, 1917, a snow blanket between 15 and 26 inches deep covered the area.

The blizzard began the afternoon of Dec. 7, continuing through the night. Level spots in the city were measured at 20 inches deep, and strong winds plowed snow into drifts of as much as six feet in some places.

The 1917 blizzard was the worst the area had seen since 1873. Snow remained on the ground all of December that year, and all of January.

There actually was more snow in January of 1918, although such a great amount as the Dec. 7 blizzard did not fall at one time.

In January 1918 a total of 35.7 inches of snow was recorded. Last January, there was a total snow accumulation of 21.4 inches.

Matters were complicated by troubles at water, light and gas plants. The Mississippi River was blocked with ice, and news accounts said city water supplies were giving out, gas was turning to sulphur and lights were flickering on and off.

Part of the problem was blamed on an inferior coal supply. Much of the nation's supply of coal at that time was being funneled for military use during the waning days of World War I.

Residents described trees as "freezing, busting, splitting and emitting sounds like rifle shots" as the branches, overladen with snow, cracked and gave way.

The method of road grading in those days was the use of horse power.

Throughout that winter, weather matters complicated normal lifestyles. By early February, ice jams had shoved out bridges in the south part of the county, leaving many residents virtually isolated.

Although a number of Southeast Missouri residents still relied on the horse as their main mode of transportation, many people also by that time invested in new-fangled automobiles.

They, like most people out on the streets today, would have been better off with an old grey mare. Hundreds of automobiles in 1917 were reported stalled in deep drifts or fallen into ditches.

"Dobie Timbs'" train, the "Moose," had a difficult time getting through the drifts on the Gulf track from Brooks' Junction (to) Cape Girardeau, newspapers reported. "Engineer Diersen hit her up for all he was worth and plowed through six and eight foot drifts," news accounts said.

Sikeston recorded 15 inches in that December storm. Malden had 24 inches and Oran got 18 inches.

As the winter wore on, water became in increasingly short supply because of the frozen Mississippi. Weather hampered efforts to install a new intake pipe into the city water plant.

Water supplies were being taken from Sloan's Creek, described then as "an open sewer." Health officials warned residents to boil all water, fearing an outbreak of typhoid.

Many area residents recalled the blizzard for years to come, telling tales of walking along fence tops crusted with snow and ice.

Drifts on some county roads reached a depth of 14 feet. Later on the snow was covered by ice, and people skated for miles across fields.

Some farmers drove nails through the heels of their boots to gain traction on the ice.

Getting supplies to rural areas became a challenge. Teams of six to eight horses were hitched to single wagons in an attempt to get through the snow and into town for supplies. This continued through December and January until the spring thaw began at last.

One Fruitland farmer trudged two miles, breaking drifts to get to the family farm to feed cattle in the barn. The four-mile round trip took from daylight until dark and had to repeated daily for many weeks.

Since weather records have been kept at The Missourian bureau office at Jackson, the January of 1918 still takes the icicle as the most severe.

The coldest January day on record, though, occurred in 1930, when the temperature fell to minus 26.