Here are a couple of trivia questions for you: What downtown building was Cape Girardeau's first skyscraper? And what Broadway structure's exterior was scaled not once, but twice, by "human flies?"

If you answered "the Himmelberger-Harrison Building" for both, you're correct.

In the summer of 1906, The Daily Republican newspaper announced that Cape Girardeau was getting its first "sky-scraper," a five-story office structure to be built by the Himmelberger-Harrison Lumber Co.

A FIVE-STORY OFFICE BUILDING FOR THE CAPE

Himmelberger-Harrison Steel Structure First of Its Kind in Southeast.

The meager announcement in yesterday's Daily Republican of the building of a modern sky-scraper on Broadway, where now stands the old Whitelaw building (residence), created much interest in this city. It is possible today to give more details of the immense structure, which will set the record for fine buildings in Southeast Missouri.

The Republican has been in possession of the facts concerning the proposed building for several days, having the information from W.H. Harrison, who consented to talk about the structure only if the facts were not published until the latter part of this week. The publication of a picture of the building in St. Louis releases the obligation this paper took.

The old Whitelaw property measures 232 by 100 feet, the latter dimensions facing on Broadway. The structure to be built by the Himmelberger-Harrison Lumber Company will occupy a space 1200 feet square, which takes in the corner of Broadway and Fountain.

In height the building will be five stories and a full basement. It will be of brick and facings of stone. The first floor will be store height and plate glass windows will run around on Broadway and Fountain Street. The main entrance to the upper stories will be in the center of the first floor on Broadway.

The building will be a modern steel fireproof structure, similar in most every detail to the fine buildings being erected in the great cities.

The first floor will be fitted for a large store and possibly the offices of the Southeast Missouri Trust company, first mention of which was made in yesterday's Republican. This floor will have not only the plate glass windows running clear around, but also those which will form the sides of the corridor running back a considerable distance from the main entrance on Broadway. Whatever is established on the first floor will have the use of the large basement.

The second, third, and fourth floors will be made into offices. The total number of these will be over 90, each of which will be large and contain all conveniences.

A wide court will extend up from the first floor through the second, third, fourth and fifth floors on the east and west sides of the building for the purpose of giving light to every office and hall in the structure. There will be corridors 8 feet wide running about each floor into which the offices will open.

The fifth floor will contain two large hall, one for dances and receptions, the other for lodges and conventions. The dance hall will measure 50 by 100 feet, supplying a need the city has felt since its new growth. The lodge hall will be 30 by 60 feet. Both halls will have spacious cloak and toilet rooms.

The basement will contain the lighting and heating systems of the building. A fine electric plant will be put in to supply light at all times. Heat will be furnished by steam.

It is estimated that the building will cost $100,000, according to Mr. Harrison. A St. Louis firm of architects drew the plans. It is proposed to start the work of demolition of the house on the site in the near future and proceed with the erection of the new building.

It has been the belief of Mr. W.H. Harrison that the trend of the city's business was out Broadway and that the district where the new building will be located will be the center.

Oddly, the name of the architectural firm which drew up the plans for the big building wasn't included in the above story: Barnett, Haines & Barnett of St. Louis.

And although the plans were announced in July 1906, the Whitelaw house wasn't razed until September of that year. Construction began shortly thereafter and was completed early in 1908. 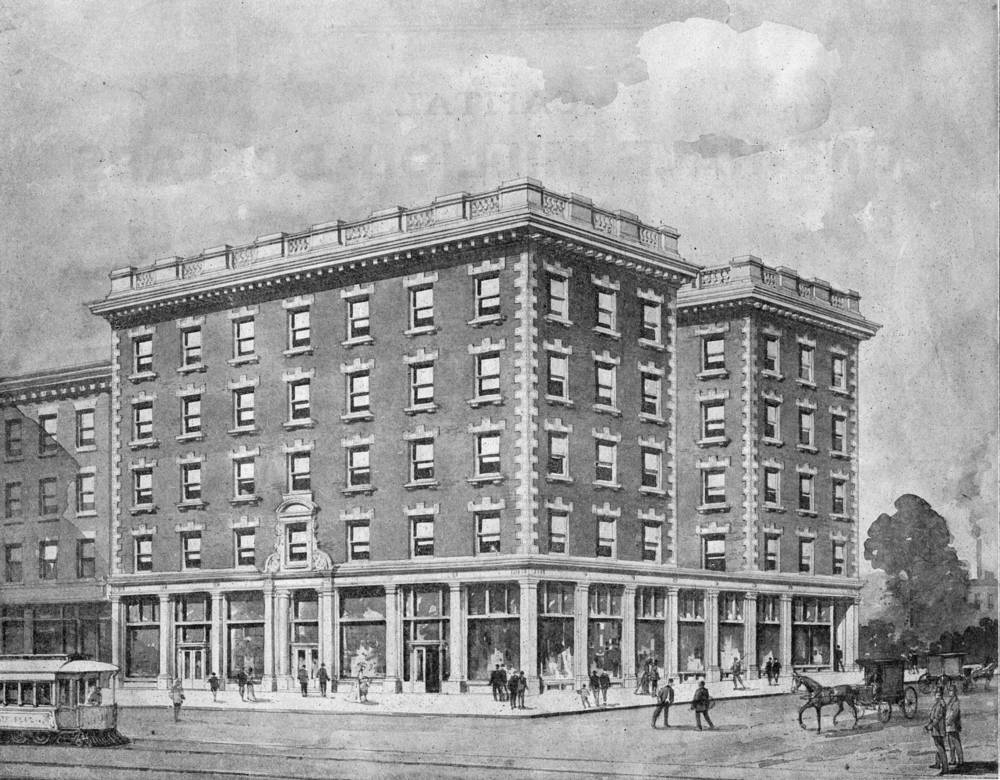 This artist's drawing of the Himmelberger-Harrison Building accompanied the story of the opening of the Southeast Missouri Trust Co., on the ground floor in the Jan. 15 1908, Daily Republican newspaper, below. (Southeast Missourian archive)

Tomorrow morning at 9 o'clock the Southeast Missouri Trust company will open its doors for business in its magnificent new home in the Himmelberger-Harrison building, which is shown above. The intent of the officers and stockholders of this trust company is to make it a representative institution of Southeast Missouri. As Cape Girardeau is the gateway into this rich territory, the enterprising men comprising this institution determined to make the home of the company one not to be excelled in the state, that new-comers and prospective investors may at the very beginning judge of the spirit and enterprise of this section.

It would take the architects themselves to adequately describe the interior of this banking house. The plans seem to have been to make the interior as magnificent as possible, without the least gaudiness. The stonework, the cages for the accountants, the mahogany rooms for the president; the ladies' room; the electrical equipment, the marble counters and other things are so plain and so artistic that altogether they leave a most stately impression.

The trust company has built its home for the future as well as the present. When it came to the decorations of the walls and ceiling, the matter of cost was laid aside to secure permanency. To have the popular bronze effect meant to have faded walls in a short time. To have tints of any sort meant the same thing, so the famous E.G. Potter, decorators of New York, were called upon. The big square panels of the ceiling are done in Tiffany gold, the covering being of aluminum, which will hold its hue permanently. The heavy cornice around these panels are done in old ivory, which is seldom seen outside the great government buildings and places of state. The massive square columns are finished about the same as the gold panels, except for a slight intermixing of green. The walls are done in deep velvet green which shade the columns and ceiling, giving them a rich effect. The chandeliers and brass screening for the banking counter are finished in the same gold effect. The marble wainscoating and two big counters for customers are of Tennessee marble, while the baseboard is of beautiful dark marble.

President Miller's private office looks upon Broadway and is to the left as you enter the room. On the opposite side is a private room for ladies. These are made of solid Mexican mahogany. The banking counter extends across the room from east to west. Back of this counter are the desks for the accountants, a big vault for the books, the money safe, a large directors' room, toilet rooms, etc. To the right of the room is a marble staircase leading to the basement, where the safety deposit vaults are. A nice room is fitted up for the accommodation of patrons of the boxes, and there isn't an accommodation that is missing. The floor is laid of Egyptian tile squares with a simple boarder.

This description comes far from doing the new place justice, but it will suffice to foretell visitors the treat that is in store for them. A general invitation is extended the public to visit the trust company.

The entire building is nearing completion. Only the work of the decorators remains to be done. Quite a few of the offices are already occupied and within another week or so the building will be open to visitors.

As the article indicates, the structure's offices filled quickly with professionals, such as attorneys and doctors, as well as with the offices of the Himmelberger-Harrison Lumber Co. and the Little River Drainage District. In later years, the Sturdivant Bank would make its home in the building, as would the Missouri Public Utilities Co.

In the 1920s the building was sold to the Liberty National Life Insurance Co. The utilities company and the Oliver, Oliver & Waltz law firm purchased the structure in 1978. They, in turn, sold it to John and Jerrianne Wyman in 2001.

In 2016 plans were announced by Jeffrey Maurer of Mayson Capital Partners of Cape Girardeau to convert the H.-H. Building into a Mariott "Courtyard" Hotel, and work on that transformation is ongoing.

At the beginning of this blog I posed two trivia questions, both of which could be answered with "the Himmelberger-Harrison Building." The first referenced Cape Girardeau's "first sky-scraper," which is how the building was described when the announcement was made of its construction in 1906.

The second question mentioned "human flies" scaling the skin of the building. Fair is fair, so I'll explain.

In December 1915 a man named Jack Williams came to town. He boasted he would climb the outside of the building, using only his hands and feet, even daring to climb up and over the large, overhanging cornice that crowned the building, before climbing back down to earth. But, alas, he failed to make good on his claims. Two thousand people showed up to see the feat, but Williams refused to make the climb until the crowd ponied up $20. Even then, he was aided in his ascent to the second floor by a rope. By the time he reached the fifth floor, the disappointed crowd had dispersed.

Seven years later, on April 22, 1922, Arthur James, a professional "human fly" and "wall scaler" who sidelined as a vaudeville performer, made the same climb before a much smaller crowd of 500. The Southeast Missourian from that date described the harrowing business: "Starting from the sidewalk, James went up to the first floor of the building, using the corner stones at the entrance. From the first floor he went up over windows, stepping in the sills and using his hands to draw himself up to the next window ledge. He was given the aid of a rope in going under and over the broad cornice at the top." Once at the top, he stood on his head on the ledge of the cornice, and "he finished his feat by scaling the flagpole on top of the building."

The photo below shows the structure as it appeared in 1920, with the cornice intact. It was removed in 1936 and replaced by a brick wall with a stone coping. 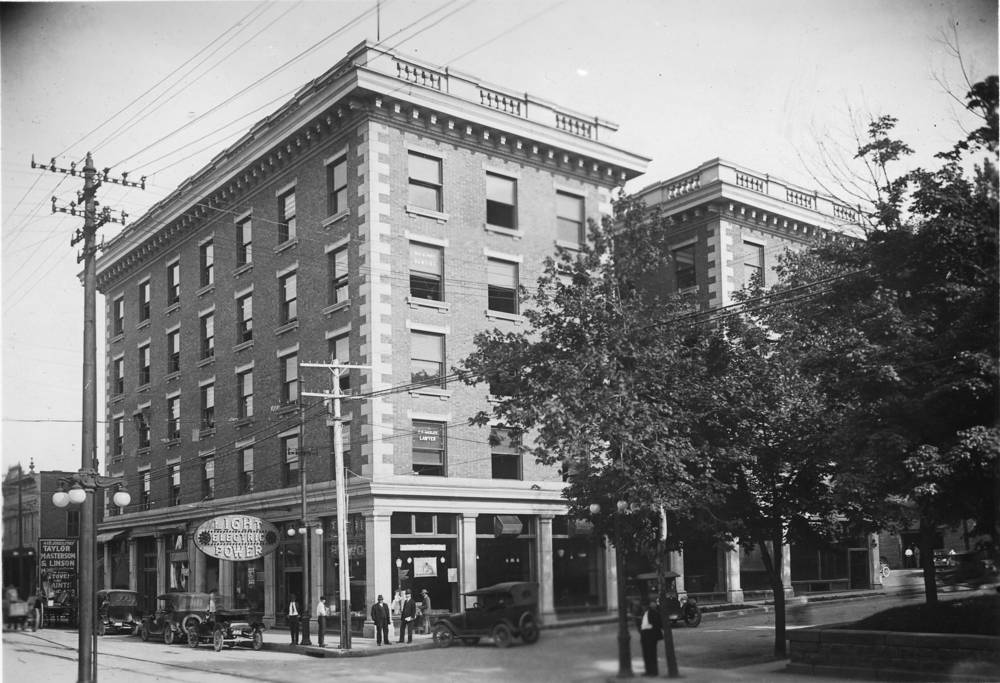