Like many genealogists, I like to flesh out the facts I gather about long-deceased relatives with items from old newspaper. There's a wealth of these publications available for viewing on the Internet, on both paid and free sites.

Cheapskate that I am, one of my favorite sites for exploring old newspapers is the Library of Congress: Chronicling America. The site allows you to tailor your search of digitized images by state or by the name of the publication: http://chroniclingamerica.loc.gov/#tab=tab_advanced_search

While flipping through issues of the Scott County Kicker, a Socialist paper published at Benton, Missouri, from 1901-1917, I stumbled across a feature article that told of the life of one John William Daugherty, a Cape Girardeau County native who was transplanted to the hills above Commerce, Missouri, as a young man.

Ordinarily, I would have skipped over the story, as I have only one Daugherty in my family tree, but other names more familiar to me soon attracted my attention: Sander and Bohnhart. It turns out, John William Daugherty's life intersected with two branches of my family, and the newspaper article provided details of my kin I had never seen before. 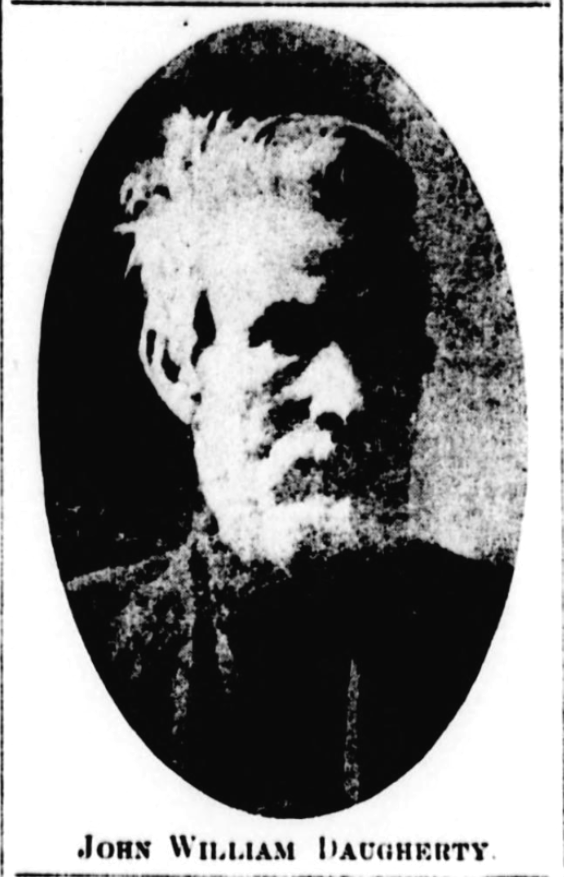 In the hills above Commerce are many old settlers, but the one who has been there longest is J(ohn) W(illiam) Daugherty, well known to a majority of the people of our county. "I was just thinking the other day," said Mr. Daugherty to a Kicker reporter a few days ago, "I am the only one left of those that were here when I first came to the hills. There are older people than I in the hills, but they came after I did."

J.W. was the son of William and Polina (Mansfield) Daugherty and was born near Jackson, Missouri, in 1835 in the same house his father was born in 1804. In 1838 his mother died and in the following March he was brought to live with Grandpa Mansfield, who had been driven from New Madrid into the hills of Scott by the earthquakes of 1811. Mr. Mansfield settled in the neighborhood that is now the Lutheran settlement near Illmo and entered about 1,000 acres of land from the Spanish government.

In 1843 William Daugherty re-married and J.W. Was taken back to the old home near Jackson, only to return five years later, when his father bought the old Mansfield homestead (the place John Buhs now owns). Since then the subject of this sketch has been a resident of the hills above Commerce and has not been absent exceeding three months at any one time. During the "squatter" uprising in Kansas in 1857 he went there and was gone three months.

On Feb. 28, 1861, he married Elizabeth Price, daughter of Thomas H. Price, who then owned what is now Rays Landing. With his wife he settled on 11 acres of land that is now platted as an addition to Illmo and belongs to Jacob Enderlee, of Kelso. There was a hewed log house, smoke house and barn, and the whole cost Mr. Daugherty $100.

The war broke out, but Mr. Daugherty felt that while his sympathies were with the South, his first duty was to take care of his young wife, and he kept out of the fight. Mr. Daugherty says that just before the ware there was unrest among the people as at present. Party lines were smashed. People refused to vote 'er straight. In 1860 he voted for Stephen A. Douglas, his father voted for John C. Brockinridge and his uncle John voted for Bell as their respective choices for president.

In 1866 Mr. Daugherty moved to the farm he now occupies and has resided there ever since. His longest vacation from home was 12 days spent at the St. Louis World's Fair. In 1898 his wife died and since then his daughter, Miss Bertie, keeps house for him. He speaks highly of the kindness and good attention given him by his daughter.

"You have been fortunate in the rearing of your children, haven't you?" queried the reporter. "All are pretty good and have done well?"

"I have nothing to complain of, he replied; "we were poor and * stayed at home and took the foremost row at work and their mother molded their minds. She was a good Christian woman to her is due the credit."

When Mr. Daugherty came to the county, Daniel Bohnhart and the father of John Etter were engaged in the manufacture of pottery. The second wife of Mr. Bohnhart lives with her son, Martin, near Illmo and is in her 80s. The oldest lady in the hills, according to Mr. Daugherty, is in the 90s.

Prior to the holiday, Mr. Daugherty took dinner with his second cousin, Mrs. C.J. Rush, of North Illmo. He was very much shocked to find that the house was built over the old Wilburn graveyard, and that the tombstones that had marked the graves of his old friends had been dragged to one side and piled up. Pinkney Wilburn, the first wife of William Burgess (Bettie Burns) and many of the first settlers were buried there. The ground was donated by Mrs. Josephine (Wilburn) Phelps, now a resident of New Madrid County.

While here during the holidays, Mr. Daugherty examined the records to see if the transfer had been recorded. He found that it was, and that the graveyard acre was not on the plat of North Illmo and was reserved in the deed from Joseph Scherer to the town site promoters. "It hurts me," said Mr. Daugherty, "to see the graves of my old friends thus desecrated. Who knows but what our graves will be treated in the same. It should not be tolerated and the prosecuting attorney has promised to act. Bettie Burns was an old school and playmate of mine and as pretty a girl as ever lived. I've danced with her many a time. And now to see her grave destroyed -- it is a shame. I'll tell you if Bill Bargess was living, he wouldn't stand it."

Mr. Daugherty is quite active for a man of his years and served on the petit jury last October. He is fond of going over the county and meeting the people at public gatherings. He is an interesting talker and very considerate of the opinions of others. He was present at the dedication of the first Catholic church at New Hamburg and well acquainted with the old settlers there.

Six years later, in the June 29, 1912, edition, the Scott County Kicker reported the death of "Uncle William Daugherty... Tuesday (June 18, 1912) after a lingering illness." He was buried at "Brierfield graveyard in Illmo." Find-a-grave.com identifies that burial place as Mount Zion Cemetery, off West Cherry Street in Scott City.