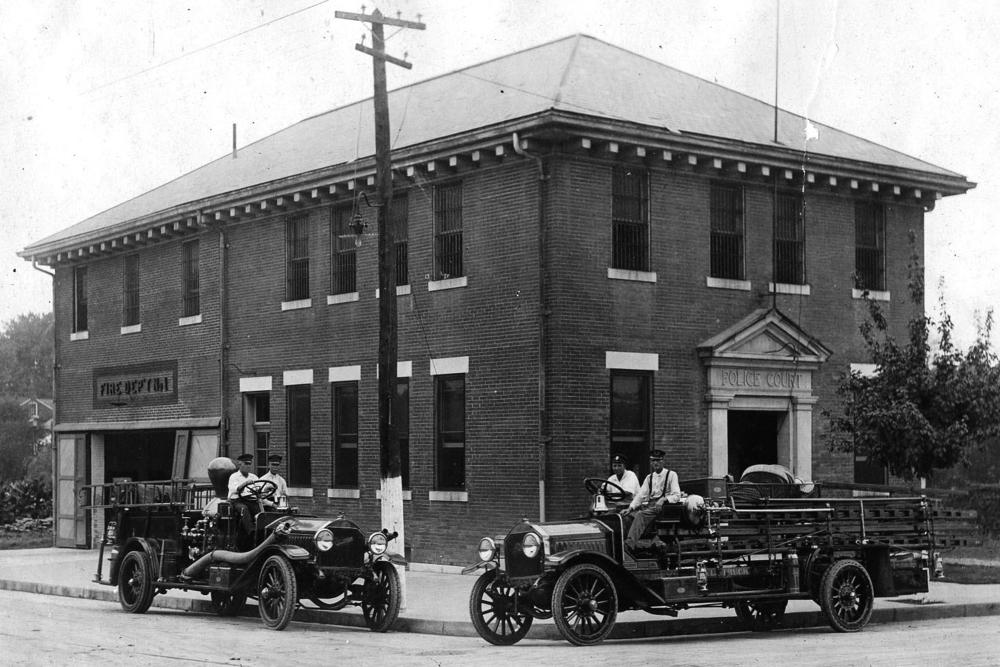 The Cape Girardeau City Council authorized the purchase of two fire trucks in 1916. At left is the pumper truck nicknamed "Jumbo." At right is the hook and ladder truck. (Southeast Missourian archive)

The year 1916 was a pivotal one for the Cape Girardeau Fire Department. In March a massive fire struck downtown Cape Girardeau, destroying three of its largest business houses: The Terminal Hotel, the Riverview Hotel and the Houck Building, housing the Buckner-Ragsdale Co. store.

Immediately there was talk of modernizing the department, getting rid of the horse-drawn wagon and replacing it with motorized fire trucks. On April 18, a special $15,000 bond election was held, but went down in defeat by just five votes. A second vote was taken on May 23, and this time the bond issue was approved, 595-268.

As the city studied the different apparatus available, more pressure to modernize was added by the loss of the city's pride, the big dapple gray horses that pulled the heavy fire wagon. On June 5, the horses met a tragic death, when they were electrocuted while answering a fire call at The Daily Republican newspaper office. A storm had darkened Cape Girardeau's streets and downed power lines onto Lorimier Street near Broadway. As he was preparing to turn right onto Broadway, fireman George West unknowingly drove the horses onto the live wires, killing them instantly.

On Aug. 7, a special committee appointed by Mayor F.A. Kage to investigate the purchase of new fire engines, recommended that the city buy an American LaFrance Co. engine. However, according to an Aug. 8 article in The Daily Republican, Mayor Kage was "bent on buying from the Robinson concern," a St. Louis company. After a heated discussion, "five of the councilmen voted that the Robinson company be given the contract," the article continued. Voting for the Robinson apparatus were J.W. Segraves, Charles Armgardt, W.H. Medley, Charles Kaess and William Brunke. Those who voted for the American-LaFrance were J.E. Fowler, Walter D. Black and Arthur C. Bowman. Black and Fowler made up the committee that recommended the American-LaFrance bid.

The story provided details of the Robinson and American-LaFrance bids: "The apparatus contracted for is a Jumbo pumping engine, which has a capacity of pumping 900 gallons of water per minute, and a hook and ladder truck. The combination will cost the city $13,150, less 5 percent. The company also offered $700 for the present outfit the city has, which consists of three horses and a wagon. With the discount and the amount offered for the present outfit taken off, the new fire-fighting apparatus will cost the city $11,792.50.

"The American-LaFrance company offered a pumping engine and a combination hook and ladder, chemical and hose truck for $13,500 and agreed to take in the fire wagon the city now has for $600. This would reduce the outfit to $12,900 and the city could dispose of the three horses. It is believed that the horses would bring as much as $800."

The newspaper editorialized against the purchase in the same edition: "The official figures in the bids offered the council to supply the city with fire apparatus indicate the Mayor Kage drove a bargain to save approximately $300 by purchasing an inferior lot of apparatus..."

But in the end, the deal was struck.

On Dec. 7 Jumbo arrived here from St. Louis by rail. The following day, The Daily Republican published a story about the truck's arrival.

Hook and Ladder Wagon Will Arrive Monday -- Test To Be Made Tuesday.

Hundreds of citizens and practically every "kid" in the city visited the fire station Thursday evening and this morning to inspect the big motor truck, which arrived here by Frisco freight Thursday.

The hook and ladder wagon did not arrive yesterday with the big truck, but a notice from the factory was received saying it would be shipped Saturday evening. If shipped at that time, it will arrive here on Monday morning.

Upon the arrival of the second truck, a test will be given them. Tom Loughlin, an expert from the factory, came here with the big truck Thursday and will remain until he teaches the local firemen to handle the engines perfectly. E.T. Robinson, president of the concern which sold the engines, will come here probably next Tuesday to be present when the engines are given the test. The mayor and fire committee will also be present at the test.

The engine received Thursday is a six-cylinder, 140 horsepower, and weighs about six tons. It carries the pumping apparatus, two chemical extinguishers, 1,500 feet of hose and about 50 feet of ladders.

The pumping apparatus is operated from the auto truck engine. It has devices on it that make it possible to pump water from the river, a pond or from the city water hydrants. A large hose is carried in case a fire is outside the fire limits of the city, so that it can be dropped into a pool of water of any sort and pumped on to the blaze.

There are connections on the pump for three hose connections but devices are carried so that six connections can be made from them. In other words, six streams of water can be thrown on a fire from the engine.

The hook and ladder wagon will not be so heavy as the truck received Thursday. It will be longer however. It will carry, besides the ladders and other apparatus which is used for climbing buildings, 600 feet of hose.

After being unloaded from the car Thursday the big truck was driven from the Frisco yards to the fire station and then out over several of the better streets of the city. It is said that it made the hills splendidly.

While the citizenry seemed to welcome the new firefighting addition, The Daily Republican's editorial that same day is less than enthusiastic.

One new fire engine has arrived and is now on duty at the fire engine station, recently enlarged at considerable expense to house the engines. Another is on its way.

The engines may justly be termed the city's newest and latest baubles, not bubbles, for probably they will not burst as similar engines of this make burst at Cairo (Illinois).

These two machines cost more than those two which the special committee recommended, although the two that were so recommended are better machines.

The two machines purchased cost so great an amount of money because they are built to furnish pressure needed only in large cities where sky-scraping buildings are numerous. Unusual strength and power are placed in the machines with engines of enormous ability to throw water.

At the most the lighter of the two engines is needed in Cape Girardeau with mere hose carts to complete adequate equipment.

The mayor and council must parade the machines before the people and visitors to the city at all hours. In no other manner will the people ever receive value for its expenditure of $15,000.

The smaller of the two trucks arrived on Dec. 14, also by the Frisco Railroad. About a week later, the new engines were put through their paces in front of the mayor and seven councilmen. The Weekly Tribune newspaper from Dec. 21 described the trial: "The demonstration attracted a great crowd at all places where the tests were made. Earl Robinson, president of the concern which manufactures the machines, came from St. Louis to be present when the apparatus was tried out.

"The pumping machine was given a thorough test at six different places. The stream was sent to the height of approximately 100 feet. At Broadway and Fountain Street, the engine developed such power that the stream of water was hurled over the Himmelberger-Harrison Building at least 30 to 40 feet.

"The first test was made at the corner of Good Hope and Frederick streets. From there the engine was taken to the corner of Williams and Lorimier streets, in front of the bungalow of F.F. Braun, which was destroyed by fire a week ago, because the proper fire combating apparatus was not to be had.

"The third test was made at the intersection of Main and Themis streets. A large crowd gathered and witnessed the exhibition. The water shot through the hose and reached a height of more than 100 feet.

"It pumped at this corner for at least half an hour, during which time the pressure was kept from between 225 and 235 pounds to the square inch. The crowd that gathered here was so great that traffic was held up for a long time. The street cars were not allowed to pass the crossing, because the hose had been stretched across the tracks.

"The water was played on several trees at this corner. In a few minutes the trees were covered with icicles, some a few feet long. Shortly after the engine had left the place the children began coasting down the icy street.

"The crowd that witnessed the fifth test at the corner of Bellevue and Sprigg streets, was drenched, and the four firemen were slightly hurt, when the nozzle broke away from the firemen. The crowd, numbering several hundred, fled in all directions, seeking shelter from the icy water, while the firemen lay on the ground after being knocked down by the force of the water. The engine had to be stopped in order to get control of the hose.

"The pressure of the water was so great that it required the combined strength of four firemen to bold the nozzle. Chief Kraft was knocked down by the force of the stream and struck across the back by the heavy nozzle. He suffered a slight injury to his back.

"Fireman Oberheide was thrown to the street with such force that he sprained his right ankle, and Assistant Chief George French was struck across the left knee when he attempted to stop the nozzle as it fell to the street. The crowd was drenched.

"Only a few citizens witnessed the test at the Normal School. The engine was taken to the main entrance of the building. The stream was thrown as high as the cupola of the building. In driving around the school building, the engine was mired in the soft ground that had not frozen sufficiently to bear the weight of the heavy truck.

"The hook and ladder truck was not put through any test further than being driven along with the engine through the streets.