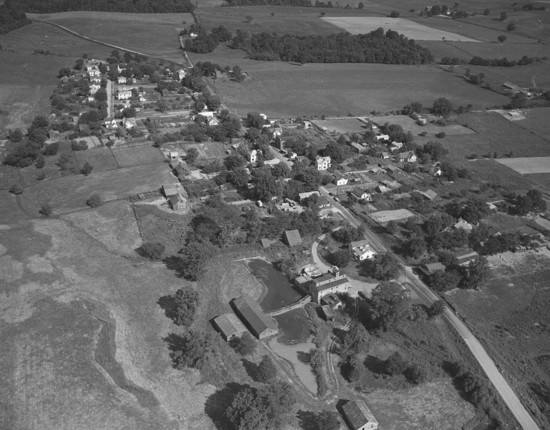 The above photograph of Gordonville was taken about 1949 by G.D. Fronabarger. It probably accompanied an article detailing the town's history. I say probably, because I have yet to find it in the Southeast Missourian's microfilm.

Some 34 years earlier, Gordonville earned a spot in The Daily Republican's 10th Anniversary Edition, with articles about the town itself, several prominent residents, and the town's bank and flour mill. The Gordonville Roller Mill is the large white building in the center bottom of the above photograph. I'll bring you the write-ups for the bank and mill in a future blog. For now, enjoy this article from 1915 about Gordonville and its prominent residents.

This enterprising village on Hubble Creek and on the Jackson branch of the St. L. I.M. & S. Railroad about five miles south of Jackson, was named after Sam Gordon, who operated a watermill on the site where the Gordonville Milling Company how has its fine plant. Mr. Gordon lived in a house that stood on the spot where Mr. William Winkler's fine residence now stands. In 1846, and he and his father owned all the land that is now the town site. Mr. Gordon also established the first store in 1857 or 1858, and the place became known as Gordonville. The elder Gordon lived in Indiana, but visited his son here frequently. After the death of Mr. Gordon, senior, a Mr. Anderson became part owner of the Gordon properties at this place, and the farm was divided, Sam Gordon holding the store and home, and all the land north of what is now Main Street in Gordonville, while Anderson, a relative, became owner of the mill and the land south of Main Street. 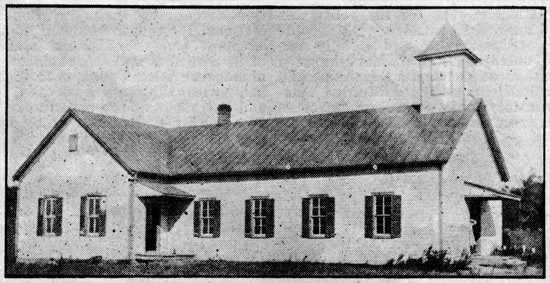 When the Germans began to fill up this country, the fine farm land around Gordonville was quickly taken up by them, and the town became quite prominent as a trading post, having meanwhile been maid a United States post office. Other mercantile establishments were soon opened and most of the merchants became well to do. Around the town are more wealthy farmers to the square mile than in any other part of the County. Good schools and churches are well established. 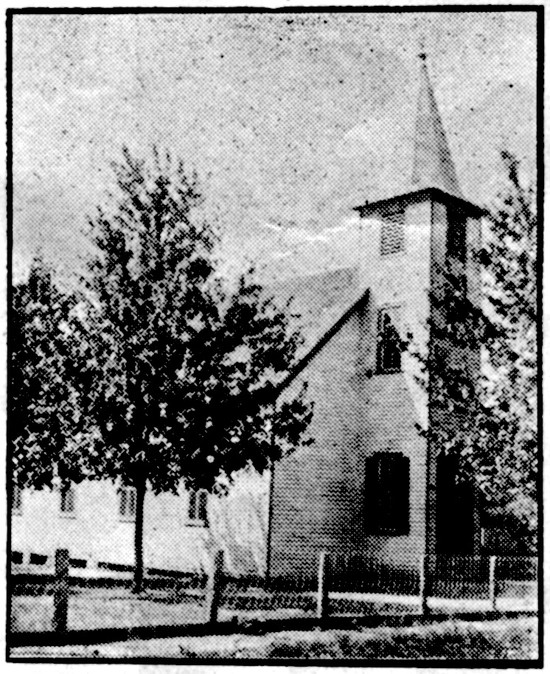 A Lutheran church was established later a few miles south of the town, and recently another was built right in the town, and in both churches the German language is used.

The business consists of a large milling plant, several mercantile establishments and shops and one bank. A small electric light plant was installed a few years ago, and Gordonville is perhaps the smallest town in Missouri that can boast of its own lighting plant.

Few men have succeeded in acquiring the esteem of their neighbors in a greater degree than has Henry P. Ahrens of Gordonville. A native of Germany, where he was born at Ellisrode in the state of Braunschweig on the 10th of October, 1837. He came to this country in 1844 with his parents, Henry Ahrens and wife, and grew up on a farm near Gordonville. He received his education in the parochial schools in Germany and in this country, also attended public school near Gordonville. He worked on the parental plantation and on that of Judge Hager until he attained his majority, and on the seventh of February, 1860, married Miss Christine Mueller, who is still his life partner, and then began farming on his own account. About twenty years ago he opened up a mercantile establishment in Gordonville, which is now being conducted by his grandson, Mr. Macke. 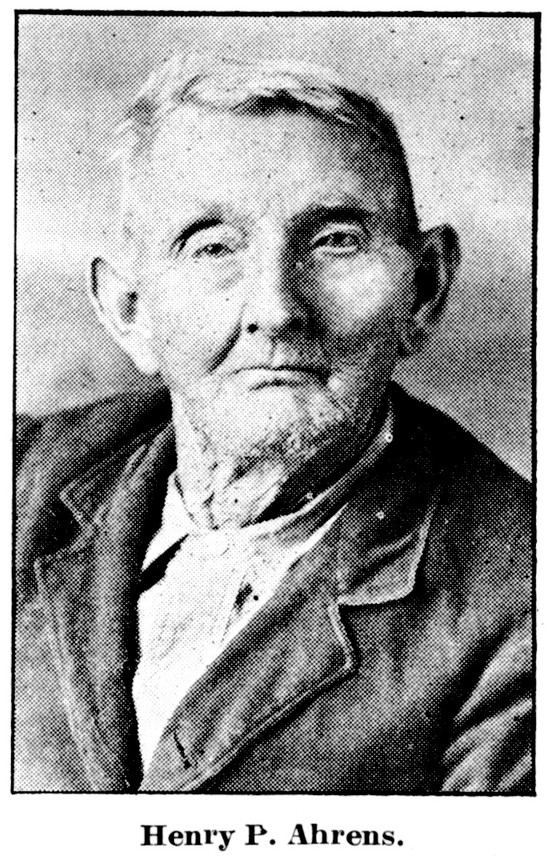 Mr. Ahrens has always been a Methodist, and has constantly affiliated with the Republican party. During the Civil War, he served in an Illinois battery, and later in the National Guard of Missouri. He now owns a farm of 175 acres of the best land ion the county, and considerable real estate in the town of Gordonville. He has held the office school director several terms, has been member of the town council, and is one of the stewards of his church.

As a past time Mr. Ahnrens still enjoys a fishing trip in spite of his age, and holds his own with the best anglers in the town.

One son, John Ahrens, one of the substantial citizens of Gordonville and now member of the town board, is the only surviving child of Mr. and Mrs. Ahrens.

Dr. E.R. Schoen, prominent physician and surgeon of Gordonville, was born on a farm near Pocahontas on Sept. 7, 1873, the son of Gustav A. and Anna Schoen, nee Lehner. 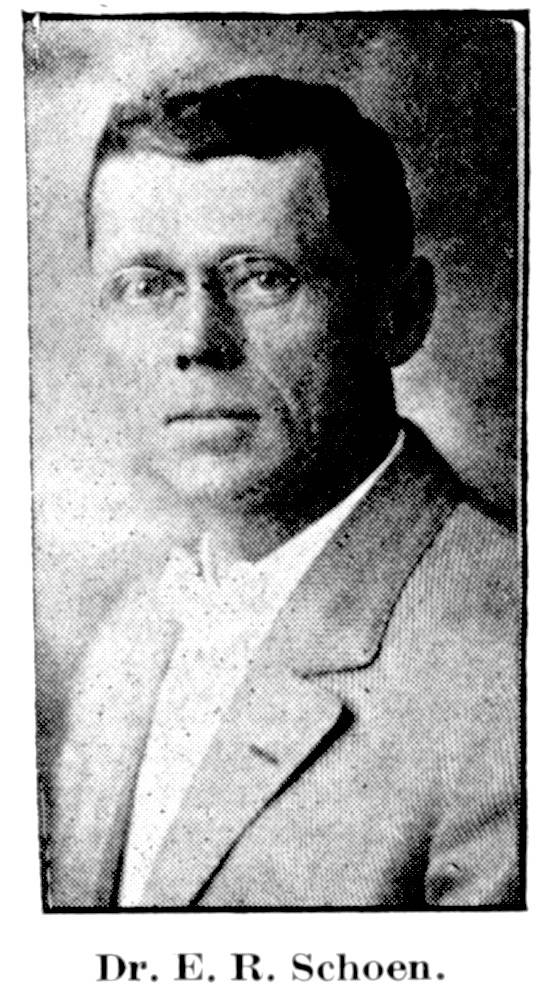 After graduating from the Lutheran parochial schools at Pocahontas, he attended the Wartburg College at Waverly, Iowa, and afterwards entered the Homeopathic Medical College of St. Louis, from which he graduated and received his diploma in 1895. During the same year, on Aug. 18, 1895, he married Miss Louise Gratz, and to this union were born three children -- two sons, Theo and Richard, and one daughter, Flora. Richard died as an infant.

Shortly after his marriage the doctor moved to Sedalia, Missouri, but returned to this county two years later, locating in Gordonville. In 1906 he was elected county coroner, and re-elected in 1912, holding the office at the present time. He is president of the board of education and stands high in his community as a physician and as a citizen.

During his spare time, the doctor likes to take a trip to the woods with his gun, or to the creek with his rod, also is a passionate automobilist, and uses the auto on his professional rounds.

He and his family are members of the Lutheran church, and the doctor has always been a Republican in politics.