Gobbler makes a break for it

Around Thanksgiving, I tried to find a story I vaguely remembered about a turkey that decided it wasn't time to sacrifice itself to grace someone's holiday dinner table and made a break for freedom. I thought the story was associated with Fischer's Market on West End Boulevard, but, alas, I couldn't find it...

While I remembered some of the details correctly, some were way off. The gobbler didn't escape from Fischer's. Its brief flight of freedom was from Ruh's Market (shown below) at 605 Good Hope St. in 1938. 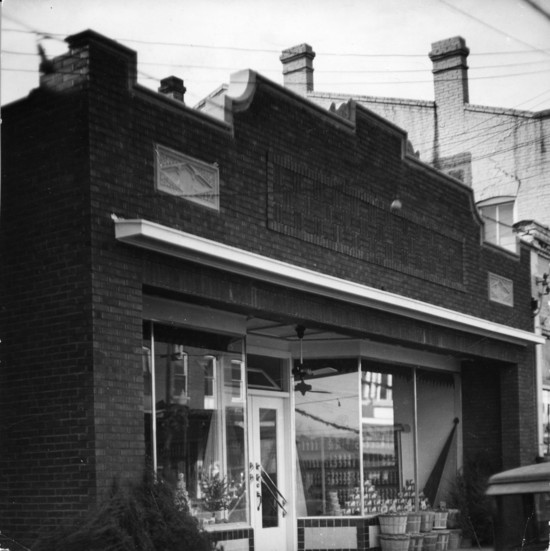 A young turkey gobbler who had enough of the Christmas spirit to sense its ominous meaning to him caused a furor in the Good Hope Street business district shortly before noon today. The turkey escaped from Ruh's Market, 605 Good Hope St., as it, along with others, was being placed in wire coops preparatory to being slaughtered for some family's Christmas dinner.

The 19-pound gobbler evidently sensed his precarious situation and took flight, passing through the entrance to the store and soaring to the top of the nearby Orpheum Theater building. Store clerks, nonplussed for the moment, watched the bird as he gobbled over his escape, then began looking for a ladder. The market force of clerks was augmented by pedestrians and a crowd of 30 or more men and boys took after Mr. Turk.

The bird skipped from building to building, always as his pursuers were ready to close in. Taking off westward, he perched onto a roof on the west side of the bock, along Sprigg Street. There he lost his balance and before he could gain altitude fluttered into the waiting arms of George Reiker, a clerk in the Ruh store.

History doesn't record "Mr. Turk's" ultimate fate, although we can probably guess what it was. While searching for more about this feathered escape artist, I found another odd, turkey-related story that ran on the front page of the Dec. 21, 1938, edition:

TURKEY CHASE FOR BOYS TO BE STAGED BY CLUB AT JACKSON

JACKSON -- A turkey chase, sponsored by the newly organized Optimist Club, will be held in the school auditorium Thursday afternoon at 3:15 o'clock. Practically every boy in the grade schools has signed up to compete.

Six turkeys will be the prizes. First there will be six turkeys for the white boys, to be chased in groups according to age, then one for the (black) boys, and a grand finale, one for the entire group of entrants.

The turkeys will be released one at a time and the boy capturing the gobbler will get to keep it. To prevent the birds flying off, the wings of each will be clipped so it will be only a running race -- between turkeys and boys...

The turkeys used in the chase weren't supplied by Frank Ruh, owner of Ruh's Market. Instead, they came from the Roscoe Zschille farm near Oak Ridge.

The article described the day's events:

A football field that was almost afloat under a few hours of cold drizzle, made the chase an interesting one. The end of virtually every chase terminated in boyish argument, and the turkeys fared none too well when the avalanche of youths swept down on them.

Disappointment reigned at the outset of the race when the turkeys, numbed by the cold, refused to run. The birds would simply stand on the field and wait for the fleetest youngsters to catch them. Determined not to have the thrills of the race spoiled, those in charge, however not by common consent, gave the birds an inspiration by the application of the notorious chemical carbon bisulphide. Just a drop for each bird provided competent acceleration. Business piked up for the remainder of the event, and boys slid and rolled in the mud after the fleeing boys

A small crowd of townspeople and many school pupils turned out in the near-freezing drizzle to witness the event. In more than one instance the judge declared a race a tie and the boys enjoyed the thrill of another chase. Some excellent football prospects were discovered as the boys blocked each other out of the chase.

Flying tackles spilled boys and turkeys all over the muddy grid. A handicap ruling gave the turkeys from 40 to 100 feet starts, and to be the winner the youngster had to catch his turkey by the legs. It was quite remarkable that the birds survived the football-like pile-up that terminated virtually every race...