Once more we return to the 1907 "Industrial Supplement" published by the Naeter Brothers for The Daily Republican newspaper. The article reprinted here was written for the supplement by Ledru Roland Johnson, an Oxford graduate and Cape Girardeau Normal School faculty member in 1907. Johnson taught horticulture at the school  and wrote a weekly gardening column for The Southeast Missourian newspaper, "Over the Garden Wall." He died here in 1944.

Johnson's essay was long on flowery prose, so I've taken the liberty of retaining here the references to Cape Girardeau and the town's future greatness. Since the supplement didn't include a suitable illustration for this article, I've substituted an undated image from the Judith Ann Crow Collection. 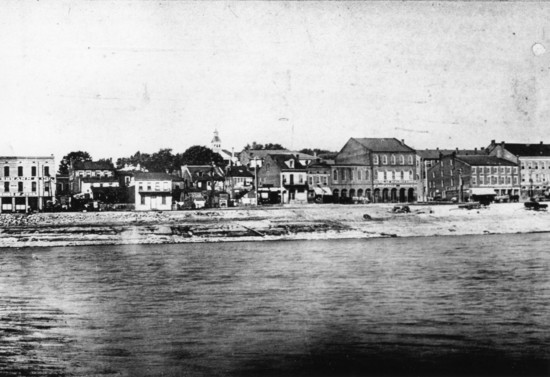 CAPE GIRARDEAU OF THE FUTURE -- HER HOROSCOPE PROCLAIMS GLORIOUS DESTINY

Happy should be town or city which a kind fate founded upon the great highway of the water (the Mississippi River), and Cape Girardeau exalts in the assurance of a great future. Not the satellite of an already great city, whose hugeness is destined to overshadow and absorb her, but standing proudly alone, the largest port for 150 miles south of St. Louis and 200 miles north of Memphis. Again kind fate, halting on the edge of the low lands, gave her a seat upon the healthful lime-stone hills, worthy to be the throne of the nation's capital. Hills and valleys alternate to form as beautiful a landscape as the eye could dream of.

A port, then, is Cape Girardeau, upon the greatest of inland waters, in the richest valley of the globe. Could ambition have asked for more? But her gifts are not yet all counted. What are here immediate environments? To the north and east a rolling country of rich farms, dotted with busy towns; a country whose development is still in its youth, whose capabilities are stil untested, but whose soil gives promise of great potentialities when science shall have come to the aid of agriculture. Horticulture, too, we most confidently predict, will find here a congenial soil for all the fruits of this latitude and the untilled hills to the north will be shaded by the foliage and abundant fruit of the apple and peach.

To the east across the river for many miles north and south, stretch the alluvial bottoms of Illinois, with trade now unsettled and seeking exit in all directions. behind them runs the long line of the bluffs, a beautiful and picturesque background for the fertile levels, and from their tops stretches eastward a territory rich in farms and orchards and truck and berry fields. No large town is there to form a center. For many miles out in our sister state Cape Girardeau looks in vain for a possible rival. There is none.

Look into the future and we see a bridge giving ample and easy ingress to the city and the trade and traffic of a great segment of Illinois passing over it.

But it is to the south that we turn our eyes with the assurance that here reality will indeed surpass the most generous anticipations. For 200 miles we look down over the alluvial basin comparable only to that of the Nile. At present we see it, as a whole, in the rough and unlovely period of early development, but it is a dull eye that cannot to some extent picture the finished creation behind this rude exterior.

The first process of stripping away nature's primeval vesture is not completed. A wealth of noble forest still stands, patiently awaiting transformation by human workmanship. The waters still sullenly dispute lordship with man over soil that they have been depositing here for ages and making still more fertile by nature's chemicals, but their mastery is doomed. Already many miles of broad ditches are hurrying them away, while powerful steam dredges, Titans harnessed by man's skill, toil day and night with gigantic arms.

Peer into the magic glass for the secrete of the future and see this great bed of alluvium transformed into a many-hued garden whence the bee-like hum of industry arises from a myriad of workers. The forests have disappeared, the waters are subdued and obedient, and the soil fertile with the hoard of ages, has unlocked its stores to man. Grain, fruit and vegetables grow in unprecedented abundance. New records for the earth's bounty are established. A cobweb maze of trolley lines furnish arteries for this great heart of industry to send its pulsing flood of traffic through.

And all this great and richly endowed territory, north, east, south and west, shall have its honored Mecca in the City of the Cape. Here shall it look to the clearing house of its trade and commerce, and of the wealth. Here shall be, in part, the port of many thousands of the greatest inland harbor in the world. Here shall be its high seats of learning, normal, college, seminary, and schools, professional and industrial, and in them shall be gathered the flower of its youth. Here shall be the residences of its wealthy, of those to whom fortune has brought leisure and the desire for the luxuries of a city, for the atmosphere of the schools, the churches and a refined society. Here, if the wisdom of the people so will, shall now begin to be laid in this twentieth century the foundations of a city beautiful in streets and parks and public buildings, with each generation's work so grandly devised that each succeeding one shall, in the passion to emulate it, surpass it.