Tony Jannus, a pioneer aviator, met his death in the cockpit of a Curtiss H-7 airplane on Oct. 12, 1915, while training Russian pilots to fly combat missions. According to Wikipedia, his plane developed engine problems and crashed into the Black Sea, killing Jannus and the two Russians with him.

Just three short years before he took his fatal plunge, Jannus was in Cape Girardeau, part way through a record over-water flight, following the Missouri and Mississippi rivers from Omaha, Neb., to New Orleans, La. 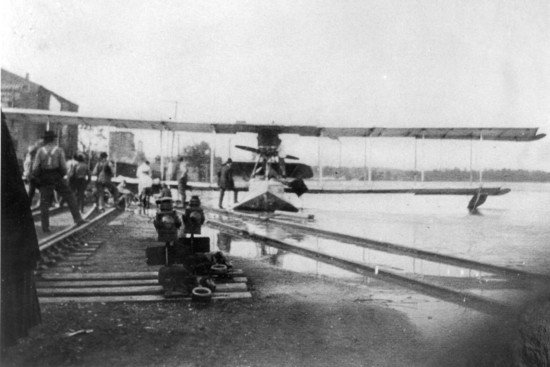 Jannus began his odyssey the afternoon of Nov. 5, 1912, taking off from Omaha in an airplane provided by the Benoist Aircraft Co. The Benoist Type XII was equipped with floats, so it could land on water.

Following the Missouri River, Jannus reached St. Louis on Nov. 17, landing at the foot of Olive Street, where he was greeted by an estimated 30,000 people. By Nov. 21, he was ready to depart on the next leg of the journey, following the Mississippi River to New Orleans. However, as his plane was cranked to start its engine, it burst into flames and was destroyed. Jannus and a photographer traveling with him, William Trefts, had to jump from the burning craft. Luckily, the Benoist company had a factory on the outskirts of St. Louis, and it was able to supply a replacement airplane.

Strong winds kept Jannus grounded until Nov. 25, when he and Trefts continued their interrupted flight. They made it to Grand Tower, Ill., that day, spending the night there. The next morning they flew to Cape Girardeau, landing here at 8:30.

When the plane was spotted just north of town, the Water and Light Co. personnel blew the siren whistle at the power plant. That signal was soon taken up by the ferryboat Gladys in mid-stream and the Morrison Ice plant as well. Soon a crowd of several hundred -- the largest assembled there since President William Howard Taft had paid a visit in 1909 -- had gathered on the levee to watch and cheer as Jannus landed. His trip from Grand Tower, he said, was made in 30 minutes.

Promptly at 1 p.m., Jannus began the demonstration flight that had been promised through an agreement between the Benoist company and the Cape Girardeau Commercial Club.

According to The Daily Republican newspaper, he "started his flight and like a bird he skimmed the water of the river, circled and dipped, rose and lowered at will gracefully. The vast throng cheered him as he started off, and his beautiful flight kept the people keyed up to the highest pitch of interest.

"Up and down the river he soared and although a brisk breeze was blowing he had a beautiful control of his machine...

"Exclamations of astonishment and approval were heard on all sides..."

However, as he brought the demonstration to a close, Jannus ran into some difficulty: "In making his last round while running about a mile a minute there seemed danger of the wind carrying him against the piling of the government jetty north of town on the Illinois side so Jannus stepped out onto a wing to cause the machine to swerve in a circle but placed his weight too far out and broke a section. This made him return to shore and make an examination, when it was discovered that one section of the wing was broken."

Arrangements were made to "express" the needed parts to fix the plane from St. Louis. And the next morning Jannus flew again, completing the flights here that had been promised. That day, the aviator took up several passengers, including Acie Sherrill; "Young Siemers, the son of Herman Siemers, a well-known farmer and director of the Cape County Fair Association," and A.M. Tinsley, manager of the power company.

By 10 a.m., the plane left Cape Girardeau for its next stop at Cairo, Ill.

It's interesting to note that there was a local connection with the support team that traveled the route by land while Jannus traveled by air.

Jack C. Henning promoted the record-setting flight and served as its advance man. He was said to be particularly anxious to come to Cape Girardeau, because he had once lived here. In fact, his father, Dr. Adolph F. Henning, was at one time the physician for St. Vincent's College.

Tony Jannus' flight ended Dec. 16, when he arrived in New Orleans. The journey set several records, including the longest flight over water (1,900 miles) and the first air freight flight. The freight in question was a case of Falstaff beer. The Lemp Beer Co., paid the Benoist company $2,500 to have Jannus deliver the beer from the mayor of St. Louis to the mayor of New Orleans.