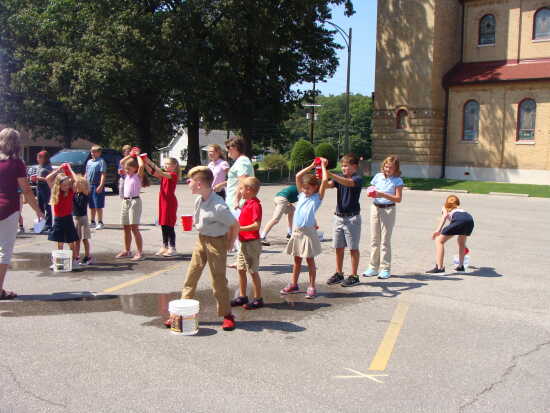 Everett David, Owen Morrison, Laynie Priggel, Dylan Levan, Gianna LeGrand and Adisyn Seabaugh form a line where by cups of water are poured over the the top of the head and into another cup, and ultimately poured into a bucket. They are members of St. Michael's house.

Guardian Angel School is back to school and back to house games for the 2021-2022 school year. Since it was a hot day on Monday, August 23, the games all included water.

The first game was passing water to the person behind you by way of a cup and trying to get the most water in a bucket by the end of the game. Some of the students had more water on them than in the bucket, but it felt very good in the hot sun.

In the next game, a sponge was used to soak up water and then thrown to the next person in line. The last person had to squeeze the water into a bucket and then ran the sponge to the fist person, who was already preparing another sponge for another round.

The last game had a person, whom is blind folded, to throw water balloons threw a hoop held by 2 students. The students could move the hoop as along as they didn't move their feet. 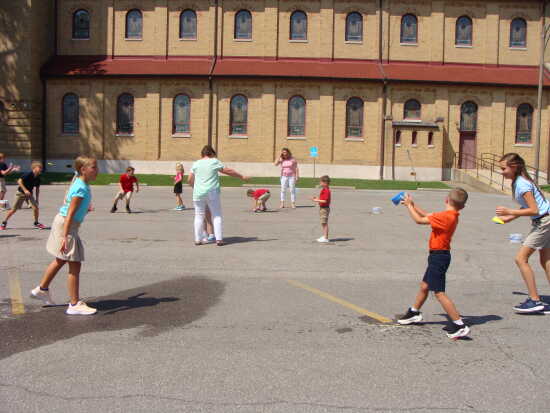 Harper Gadberry throws a wet sponge to Tucker Hahn while Amelia LeGrand returns a different sponge to the first position. They are members of St. Raphael's house.

Everyone had a good time with these games. The school year is off to a very good and wet start. 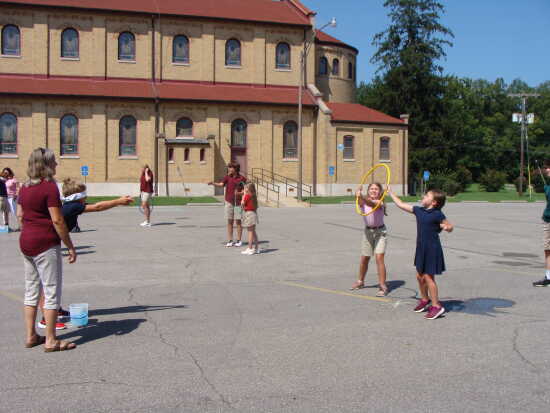 Members of St. Gabriel's house put in a lot of effort to play their game. Jonah Dirnberger is blind folded and throwing water balloons through a hoop held by Elaina Hahn and Chloe Caudle.
News about Cape and Jackson matters. Sign up for free updates.