The following story has been submitted by a user of semissourian.com. To submit your own story to the site, click here.
User-submitted story by Marla Mills 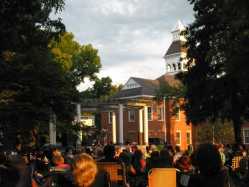 Old Town Cape will kick off the first half of its 2008 Tunes at Twilight Concert Series, sponsored by The Bank of Missouri and Coad Family of Dealerships, starting on May 16 with Dennis Stroughmatt with Creole Stomp. The six week Tunes spring concerts are held every Friday night through June 20 from 7 to 8 p.m. at the Court of Common Pleas Gazebo (corner of Themis and Lorimier Streets) and are free to the public.

Dennis Stroughmatt, a French Creole fiddler, has performed in Cape Girardeau on a number of occasions. Since 1999, Dennis has been a touring French Creole musician and speaker working across the United States, Canada, and Europe. First introduced to American French culture as a teenager near Old Mines, Missouri, Dennis spent two and a half intensive years recording, observing, and learning many of the Creole French traditions still alive in "Upper Louisiana." The knowledge that he gained there included a centuries old French Creole fiddling style from fiddlers Roy Boyer and Charlie Pashia, fluency in Illinois-Missouri Creole French, and a wealth of stories and songs from story tellers and singers like Rose Pratte, Annie Pashia.

Old Town Cape volunteers Larry and Jean Underberg coordinate the concert series. Larry Underberg says, "We have a great line up for our Spring series and are especially excited to open with Dennis Stroughmatt, who has become very popular with the local community. We are proud to provide such quality entertainment for the community."

In case of rain, the concerts will be moved to Rose Theater on the Southeast Missouri State University Campus at the Corner of Pacific and Normal.

For more information about Tunes at Twilight please contact the Old Town Cape office at 334- 8085.