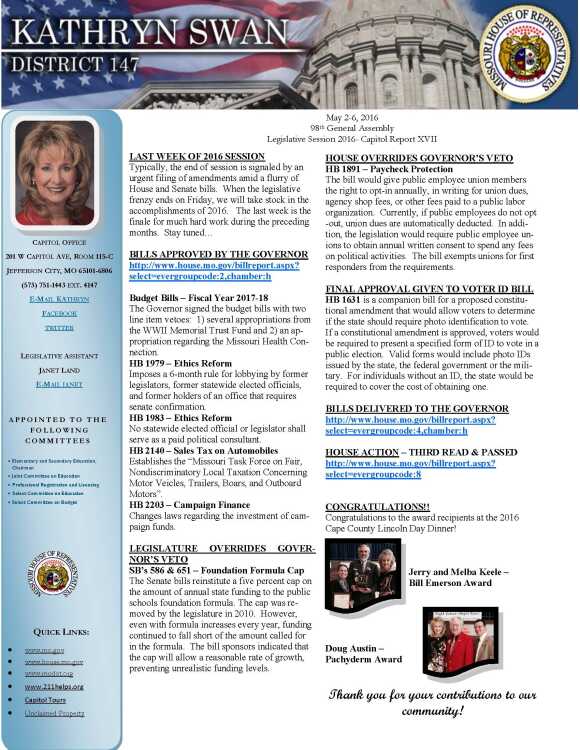 Typically, the end of session is signaled by an urgent filing of amendments amid a flurry of House and Senate bills. When the legislative frenzy ends on Friday, we will take stock in the accomplishments of 2016. The last week is the finale for much hard work during the preceding months. Stay tuned…

BILLS APPROVED BY THE GOVERNOR

The Governor signed the budget bills with two line item vetoes: 1) several appropriations from the WWII Memorial Trust Fund and 2) an appropriation regarding the Missouri Health Connection.

Imposes a 6-month rule for lobbying by former legislators, former statewide elected officials, and former holders of an office that requires senate confirmation.

No statewide elected official or legislator shall serve as a paid political consultant.

Changes laws regarding the investment of campaign funds.

The Senate bills reinstitute a five percent cap on the amount of annual state funding to the public schools foundation formula. The cap was removed by the legislature in 2010. However, even with formula increases every year, funding continued to fall short of the amount called for in the formula. The bill sponsors indicated that the cap will allow a reasonable rate of growth, preventing unrealistic funding levels.

The bill would give public employee union members the right to opt-in annually, in writing for union dues, agency shop fees, or other fees paid to a public labor organization. Currently, if public employees do not opt-out, union dues are automatically deducted. In addition, the legislation would require public employee unions to obtain annual written consent to spend any fees on political activities. The bill exempts unions for first responders from the requirements.

HB 1631 is a companion bill for a proposed constitutional amendment that would allow voters to determine if the state should require photo identification to vote. If a constitutional amendment is approved, voters would be required to present a specified form of ID to vote in a public election. Valid forms would include photo IDs issued by the state, the federal government or the military. For individuals without an ID, the state would be required to cover the cost of obtaining one.

BILLS DELIVERED TO THE GOVERNOR

Congratulations to the award recipients at the 2016 Cape County Lincoln Day Dinner!

Thank you for your contributions to our community!

ACTIVITY ON SPONSORED BILLS – Bills in Motion this week in BOLD

Voted out of Senate Ed Committee

Voted out of Senate – On House Calendar

Local Sales and Use Tax

Limits Lobbyist Gifts, Prohibits Accepting Anything of Value for Votes

Establishes a visiting scholars certificate of license to teach