A small, yellowed photograph that came to me through the late Katherine Cochran provides an image of Maj. James Francis Brooks, a man I had heard of, but had never seen before. 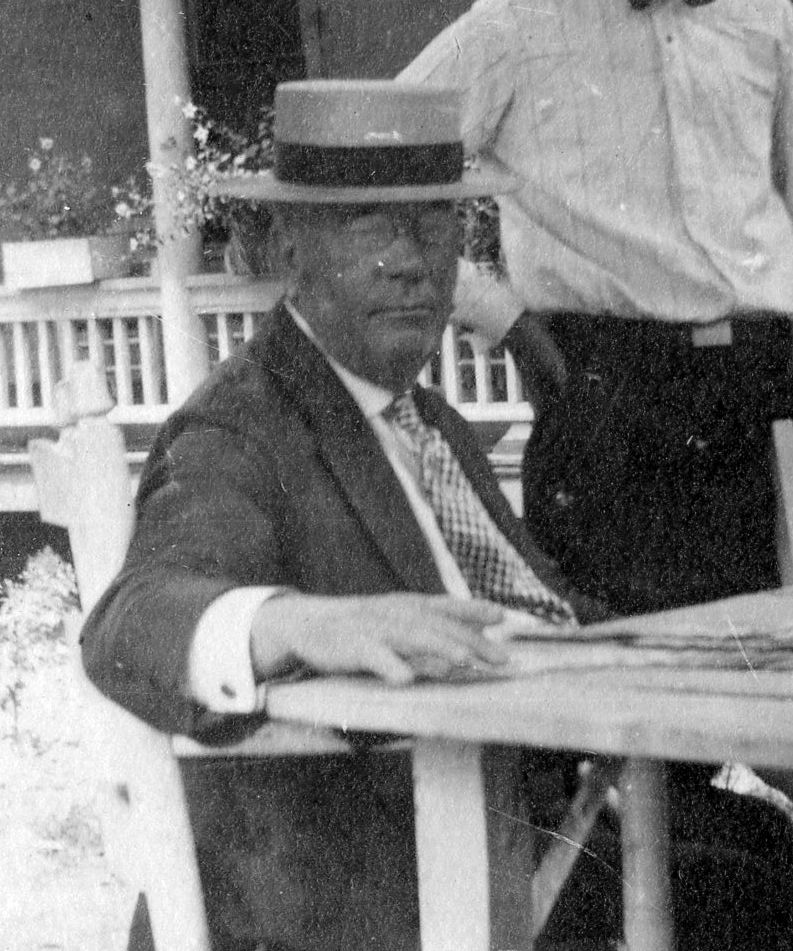 He is pictured seated at an outdoors table playing cards at the hotel at the Schumer Springs health resort near Biehle, Missouri. Brooks would have been 76 when this photo was made in July 1920. (The original, un-cropped image was featured in last week’s blog about Schumer Springs.)

Save for his obituary, the Missourian files contain surprisingly little about the life of this prominent civil engineer, who helped Louis Houck lay out his railroad empire. Born on a steamboat on the Missouri River on Nov. 5, 1843, he was the son of James and Margaret Davis Brooks. His family resided in Platte County for a time, and he received his engineering education at Vinyard's College near Fort Leavenworth, Kansas. He served in the paymaster's office in Jefferson City during the Civil War.

It wasn't until after the war that Brooks came to Cape Girardeau County. He settled in Jackson, and there met Florence Adele Turnbaugh, the daughter of hotel owners John J. and Nancy A. Morrison Turnbaugh. They married in 1875. Two years later, the couple built a home on First East Street. In 1892, the family moved from Jackson to a new residence at 1451 Broadway in Cape Girardeau.

Along with the Brooks obituary published the day he died, on July 13, 1927, the Missourian also printed a story in 1939, when his Broadway home was razed.

Shock From Fall Fatal to Man Who Laid Out Many Missouri Railroads.

Major James Francis Brooks, 83 years old, a pioneer civil engineer who laid out much of the present network of railroads in Southeast Missouri and one of the founders of the original telephone system in Cape Girardeau, died at his home at 1451 Broadway at 3 a.m. today.

Shock resulting form a fall from a chair on the front porch of his home a week ago, in which he sustained a fractured hip, with the general infirmities of his advanced age, caused his death.

He became delirious a short time after the accident and, due to his extreme age, his condition had been serious for several days. He had previously enjoyed excellent health, except for minor maladies, and up to the time of his demise had full control of his faculties and maintained the great interest in the events of the day as had always been his custom.

While associated with the Late Louis Houck in the building of railroads in this section, Major Brooks surveyed what is now the main Frisco railroad line from St. Mary's to Cape Girardeau. He also had charge of the laying out of the Houck lines from Cape Girardeau to other Southeast Missouri points, including that now known as the Gulf branch and other sections now owned and operated by the Frisco railroad.

He also laid out and aided in the construction of the present Cape Girardeau Northern railway, running from here to Jackson, Perryville and the Saline valley section to Farmington.

With a number of other pioneer Girardeans, he was instrumental in the establishment of the present Cape Girardeau Telephone Company and was its chief engineer when the present system was laid out.

The exchange and system were founded in 1897 by Major Brooks and others, including John Tlapek, Henry Rozier, A.R. Ponder and Leon Albert, and its completion was the result of his dream for years. He maintained his interest in the telephone company and at the time of his death was one of the directors and a heavy stockholder in the company.

Despite his retirement from active work 14 years ago, he has maintained his interest in his profession and in all scientific developments, and was a constant student, familiar with the rapid strides that science has made in the past several years.

Major Brooks was born on a steamer on the Missouri River on Nov. 5, 1843 while his parents were en route to Platte County, then known as the Platte Purchase.

He was the son of James and Margaret Davis Brooks and his family was of the same ancestry as that of Daniel Boone and Kit Carson, a fact of which he was very proud. His parents were pioneer settlers in Missouri, migrating to this state from Maryland.

He lived with his parents in his early life near Fort Leavenworth, Kansas, and while there attended Vinyard's College near the fort, an institution also attended by the children of the officers attached to the fort.

During the Civil War he was attached to the paymaster's office at Jefferson City, and after the close of the fighting while engaged in writing commissions for the promotion of other officers, was instructed to write his own commission as a major.

He demurred and Governor (T.C.) Fletcher wrote the commission with his own hand. This commission was a source of pride to Major Brooks and one that he always cherished.

Major Brooks came to Cape Girardeau County in 1870, realizing at that time that a great future lay before this then sparsely settled section. He engaged in his profession at Jackson until 1892, when he moved to Cape Girardeau and erected the present impressive brick building on West Broadway, where he lived and passed away.

He was married in 1875 at Jackson to Miss Florence Adele Turnbaugh, a member of another pioneer family in this county.

He is survived by his widow, five daughters, who are: Mrs. Z.D. Kinkead of Webster Groves, and Mrs. A.J. Siebert, Mrs. A.C. Vasterling, Mrs. Charles G. Wilson and Mrs. C.E. Stiver, all of Cape Girardeau; and one son, Philip Lee, of Cape Girardeau. Another son, Dr. J. Frank Brooks, who had lived at Clarkton, died last July.

Funeral services will be held from the family home on West Broadway, Thursday afternoon at 9 o'clock. Rev. J. Pendleton Scruggs, pastor of First Baptist Church, will conduct the services. Interment will be in Lorimier Cemetery.

Major Brooks enjoyed the acquaintance and respect of hundreds, not only in Cape Girardeau, but in the surrounding communities, through friendships he made during his years of work. He was also intensely interested in community affairs and kept informed on all modern problems.

He was a careful student and a constant reader, especially of scientific works and the better class fiction. He kept astride with the development of science through his intensive reading and his library is considered one of the finest in the entire country.

From youth, he was a lover of nature and especially was he fond of trees. When he laid out his home here, he paid particular attention to the trees and practically all of them ow remain, a silent tribute to his careful attention. His home, sitting back from the street, is one of the picturesque spots of the city.

He was always kindly in word and manner and made friends wherever he went. His devotion to his family was marked and he preferred the seclusion of his home, with his books as his entertainment, to the more modern forms of amusement. 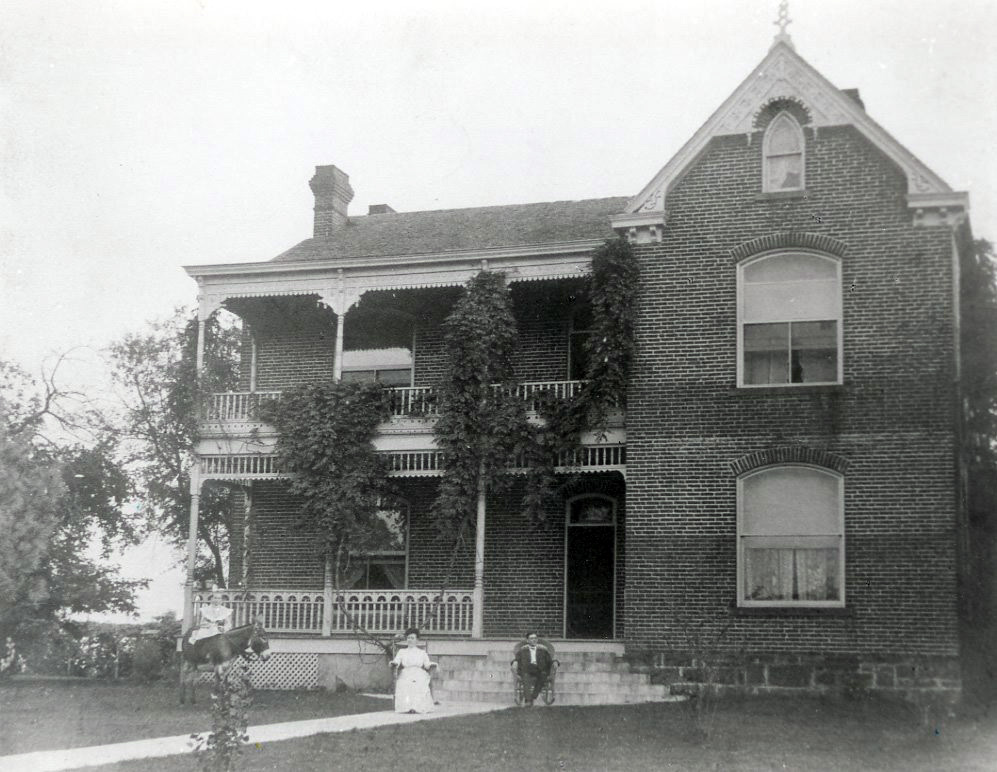 The Brooks home, 1451 Broadway in Cape Girardeau, was built in 1892 and was razed in 1939. (Southeast Missourian archive)

A decade after Brooks' death, his widow passed away on Aug. 4, 1937. Two years after that, their home on West Broadway was demolished.

Another Cape Girardeau landmark is passing. Wreckers today began razing he fine old J.F. Brooks dwelling at 1451 Broadway. Furniture moved out of the structure included many excellent old pieces which had graced the home for years. Movers had to be particularly careful with a great old piano, built to stand the test of ages, which had been in the family since shortly before the Civil War.

Heavy enough to require the efforts of a half-dozen men to carry it, the instrument was taken to the home of Mrs. C.E. Stiver, 1438 Luce St., one of the daughters of Mr. and Mrs. J.F. Brooks, who established the residence.

The two-story brick building, set well back in a 2-acre grove of trees at the southeast corner of the Broadway-Louisiana avenue intersection, was erected by Mr. and Mrs. Brooks in 1892 after they moved here from Jackson. Mr. Brooks, a civil engineer, graced the premises with many fine native trees, such as maple, poplar and pine, and added some tulip trees. The trees are now large. Many of them were set out by Mr. Brooks when they were saplings.

With a great deal of regret, children of Mr. and Mrs. Brooks are now razing the structure. Mr. Brooks died in 1917 and Mrs. Brooks succumbed two years ago. They decided that they would not rent the home although all of the children have their own homes, and one son, Philip, has resided in a downtown apartment since the death of his mother.

The site will be sold and it is hoped, Mr. and Mrs. Stiver said today, that they can release it to some person who will keep it intact and erect a fine dwelling there, preserving the present beautiful grounds. The old structure has 10 rooms, is equipped with four first-floor fireplaces, three of which in recent years had been converted into coal-burning grates. The rooms are those large, airy ones with high ceilings such as are rarely incorporated into modern houses.

Built of Hand Made Brick.

The old hand-made brick with which the 13-inch walls of the house were built were made at the old Daues brickyard which, before the present century, existed at South Ellis Street and Jefferson Avenue.

"These are real brick," commented L.A. Mudd, the contractor who is razing the building.

The sandstone foundation is like those which have supported many old buildings long since torn down. In recent years a new roof was put on the house. Some of the finest lumber milled in this section of the country was used in construction of the big upper and lower porches at the front of the house.

Mr. Brooks explained that the house was getting too old, he thought, to be repaired to advantage. Some of the floors were sinking slightly and the family decided to remove the building, making the site more desirable for the next owner.

Only one of the six children, Mrs. Stiver, the youngest, was born at this dwelling. The others are her brother, Philip, and Mrs. A.C. Vasterling, Mrs. A.B. Siebert and Mrs. Charles G. Wilson of Cape Girardeau and Mrs. E.R. Kinkead of Webster Grove.